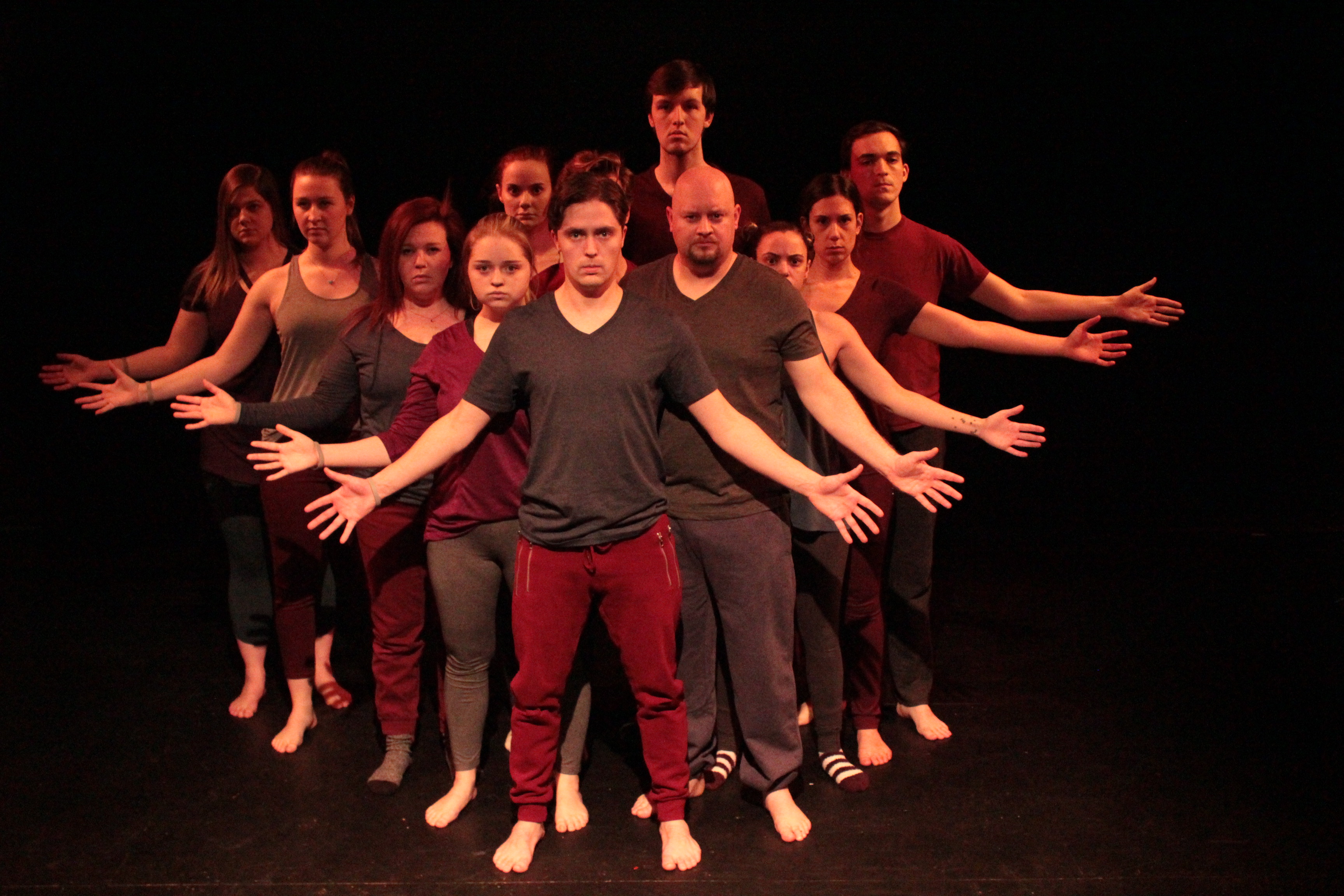 There are some plays that you see that stick to your craw whether or not you care for them. There are many reasons for this, but the most common is that the hard work the company put in creates a show that gets under your skin. I had that experience at Stage 773 watching Saltbox Theatre’s 4:48 Psychosis: there was no way I didn’t appreciate the complicated task this company undertook successfully in putting it on.

Let me try to describe this highly unusual show for you: 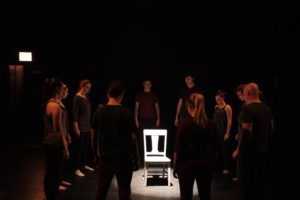 As you enter the theatre, the players, most of whom are clothed in shades of burgundy and black, are already onstage, sitting or standing frozen, many in contorted positions. Onstage also is a white chair, bathed in what is later described as “harsh light.” From this tableau, the actors will move (usually in slow motion) around the stage in specific patterns, often to music, often with more contortion in arm movements. As they do, they will speak lines that, taken all together, seem to be (at their core) the stream of consciousness poetic ramblings of someone in the throes of psychosis. There are also interludes in which various possible treatments of mental illness from pills to therapy are portrayed and/or discussed. One of the play’s many disconnected fragments deals with cutting and apparently consists of a mother talking to a son. Others feature patients talking with doctors or yelling at them that treatment is not working. There is plenty in here about pain and anguish, but there is also a lot about love, the need for love of all kinds, the pain of not having it.

All of this is the work and vision of director Brian Fruits. Sarah Kane’s script, written in 1999 while she was suffering from a serious mental illness that led her to kill herself before the play was ever produced, contains no stage directions. It does not signify who speaks what line or even the number of players needed to put it on. Fruits’ concept of the play is clearly that it is the product of a mind broken by illness (the 4:48 of the title is the time at which Kane would often awaken to deal with her trauma), and he has his actors use a form of interpretive dance to portray various elements in both literal and figurative ways. The cutting scene is quiet and realistic, but a scene in which Kane’s mind is crawling with cockroaches finds the actors surrounding the main speaker and using finger movements and body movements to “become” the roaches. Another scene in which Kane is describing how stuck she feels is played by cast members who wrench their hands away from walls they seem glued to. 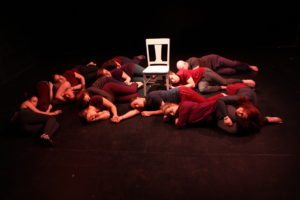 Many scenes double back on earlier fragments, repeating things we have heard before in different ways. One such line is the one that opens the show: “You have friends. You have lots of friends.” This is followed by a question: “what do you offer your friends to make them so supportive?” The clear goal of the lines is to get the suicidal patient to examine herself and all of the good things she does bring to the table. It’s a powerful thought to give to a person who is going over the edge, feeling hopeless: “You have no choice; the choice comes after.” Kane’s play, an 85-minute long suicide note, offers a dark examination of the troubled mind. “There’s not a drug on earth can life meaningful,” one actor states. Another tells us to “embrace beautiful lies – the chronic insanity of the sane.” But it also contains doses of black humor:

Have you made any plans?
Take an overdose, slash my wrists then hang myself.
All those things together?
It couldn’t possibly be misconstrued as a cry for help.

I dreamt that I went to the doctor’s and she gave me eight minutes to live. I’d been sitting in the fucking waiting room for half an hour.

There are also lines, though, that show the sheer hopelessness that depression can cause:

It is myself I have never met, whose face is pasted on the underside of my mind

I should also mention that the language here is often obscene. I lost track of the number of times the word “fuck” was used. One speech alone uses it ten times, followed by “fuck you” individually to every other cast member…twice. If this sort of thing bothers you, don’t see this play.

The play’s ensemble is uniformly excellent, and their work as an ensemble is powerful and focused. Alli Braun, Dane Van Brocklin, Carly Crawford, Lauren Demerath, Gavin Farrow, Kevin Garrett, Brian Bengtson, Allison Call, Anne Ogden, Lauren Partch, Bryce Saxon, and Ryan Smetana work together like a well-lubricated machine. Fruits clearly had them working hard to achieve these results. And Jonathan Hadley’s music and sound design, along with some lovely lighting by Kara Grimm-Denholm, emphasize various moments beautifully. This is a show with strong production values despite being played on a black stage.

Despite all of this, I felt the need to give it a Yellow Light status because it is clearly not a show for everyone. I’ll recommend it to anyone who has an interest in inventive, avant-garde staging as long as you are also interested in dark, difficult material. If either of these two criteria does not prevail, I’d suggest you stay away, as you might feel that it is the first 85-minute show in history that is too long. If you go, though, you’ll witness something singular and powerful. It will undoubtedly stay with you for a very long time.

4:48 Psychosis is now playing at Stage 773 (presented by Saltbox Theatre Collective), 1225 W. Belmont Ave, Chicago through March 11. Tickets are $15-20 and are available at saltboxtheatre.org. For more information about this and other shows, see theatreinChicago.com.