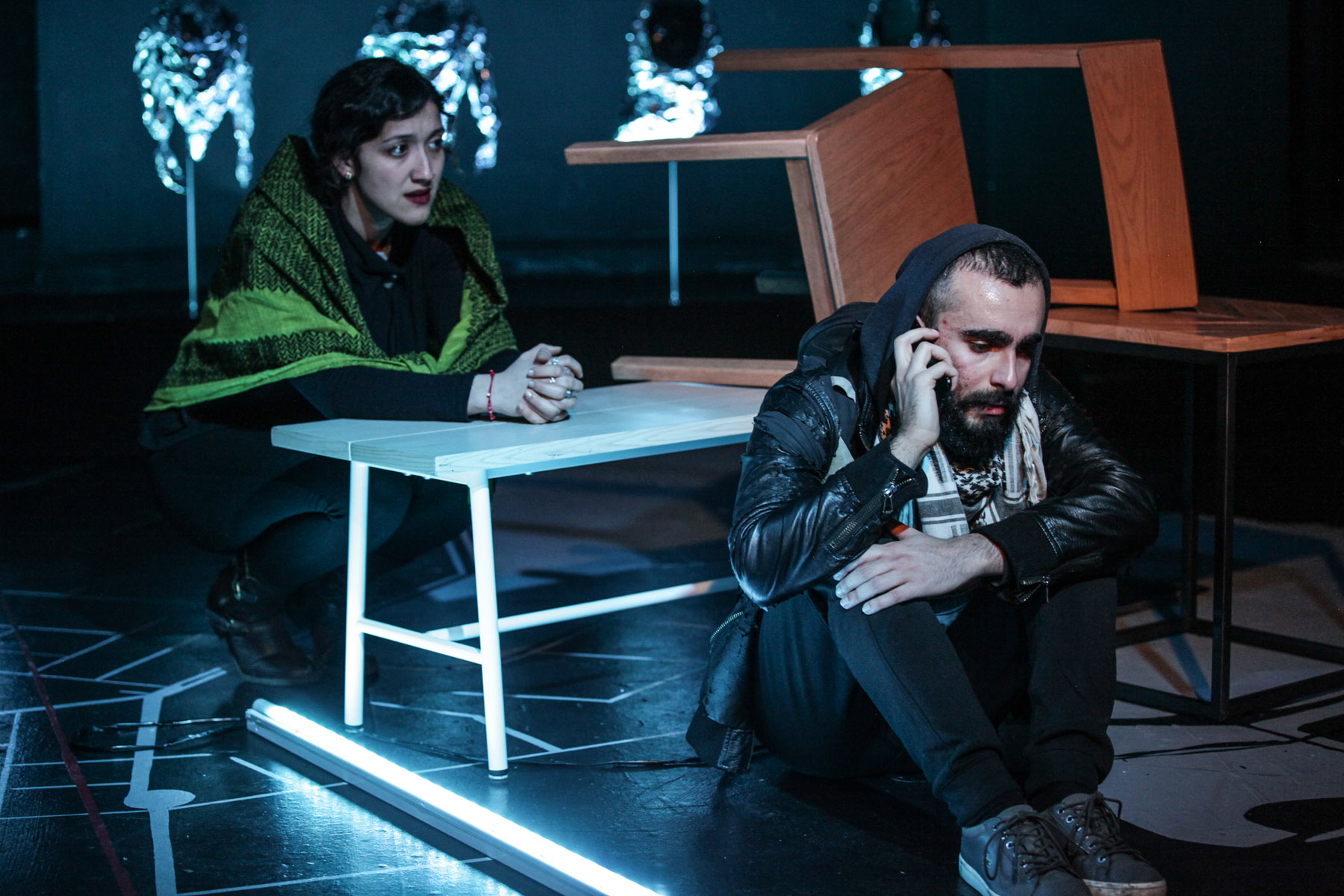 As I left the Rivendell Theatre after watching the premiere of Jonas Hassen Khemiri’s I Call My Brothers, a powerful look at the way our society rushes to judge all people of the same color, religion, or ethnicity (in this case Muslim) when something goes wrong and how those targeted people can internalize their fear of those reactions, my thoughts turned to, of all things, Cody Parkey.

Bear with me here (no pun intended). A missed field goal is hardly the same as a terrorist attack, but Parkey has been personally vilified on Twitter for what turns out to be a blocked field goal on Sunday, as if his leg is the only thing that lost the game. Imagine being Parkey, on the receiving end of all of that abuse: what could it do to your psyche? And the hatred and vehemence of those tweets is nothing at all compared to the way society treats Muslims whenever there is a terrorist attack, when anyone with a thick beard and a keffiyeh is instantly viewed as a potential bomber or what-have-you.

I Call My Brothers takes place in Sweden, but the levels of intolerance and xenophobia fueling it could come right out of American headlines. In this play, a car bomb explodes in downtown Stockholm and, instantly, the city’s population of Muslims knows to go underground: don’t leave the apartment, don’t wear the keffiyeh or the hijab, shave if you can. “Blend in” is the message they tell each other. But Amor (Salar Ardebili) is caught in a bind: he has an important errand to run for family that necessitates his going out, and he has promised to do it. So out he goes.

Khemiri’s script, directed by Abhi Shrestha, takes us along on Amor’s journey through the city, but it also takes us deep into his mind as he begins to imagine that everyone is looking at him and everyone is judging him. We listen to what appears to be a policeman watching his every move. We see him interact with a Muslim store clerk who is clearly trying to assimilate and wants nothing to do with him. We follow along as he runs into a Muslim man in a dark park who is apparently being harassed by two policemen. And all the while we venture in and out of his deep psyche, his memories, and his fears.

Amor is already an unstable person when these specific tribulations begin. He has a history of stalking a long-time friend named Valeria (Gloria Imseih Petrelli). He has only one current friend, Shavi (Chris Koshaba), who annoys him by speaking all the time about his new baby. When the bombing happens, he is actually drunk, alone, at a nightclub, emblematic of his borderline personality. As he navigates the city the next day, we are immersed in his mental turmoil, his emotional breakdown because of a kind of institutionalized guilt for a thing he had no control over at all. He imagines himself doing all sorts of things, only some of which are actually happening. An extended scene finds him talking to his dead grandmother (Tina El Gamal). His pain and fear are clear and obvious. And Shrestha assures that we understand it by shrewd use of her ensemble, all of whom play multiple roles.

That ensemble is wonderful, but it is Shrestha and Ardebili who make the show as intense and powerful as it is. Building on what is already a heightened sense of internalized fear present in the script, Shrestha stages even the chaos of the bombing itself through imaginative use of slow motion and the sparse furniture on the set. They also create stage pictures that continually reinforce how alone Amor feels. And Ardebili’s provocative performance shows us a man falling apart as he just tries to go through his day, allowing us to get inside and experience his emotional turmoil with him.

The set design, by Eleanor Khan, includes a wall of foil keffiyehs and hijabs, brightly reflecting the reality that a Muslim is instantly recognizable, and lighting designer Michelle E. Benda adds some lovely shadowing and emphasis by the use of a single LED light bar that the actors manipulate. Jeffrey Levin’s sound design is mostly subtle but includes an amplifier with a sampler, allowing us to hear the feedback loops in Amor’s mind. This is a carefully thought-out production.

Khan’s set design also includes a question from the script: “What do you do when the wind howls?” For Amor, the wind is howling viciously, but the power of the direction and acting help the audience to empathize with the person that is instantly vilified and blamed when things like this go down. You know it is true: think the word “terrorist” and the word “Muslim” is somewhere close by, even though statistics prove that the vast majority of all American terrorist acts are actually perpetrated by white males. And even in cases, such as the one in this play, in which the perpetrator is Muslim, all Muslims are not the perpetrator. For ninety minutes, we are able to get inside the head of someone who is persecuted not only by the outer world but by his own reactions to it, and it is harrowing.

Fortunately for Cody Parkey, by all accounts he has been able to tune out the howling wind of vitriol swirling about him. But he is a football player, a member of an elite class of Americans, and he knows that, ultimately, it’s just a game. Amor has no such knowledge, for anti-immigrant, anti-Muslim anger has run deep in the western world ever since 9/11. And though he should feel safety in his home city, safety is not going to come. I Call My Brothers is an unusual, compelling, emotionally wrenching play that is, unfortunately, unlikely to be seen by the audience that needs it the most. This is not a perfect play, but those who do see it will know they have witnessed something unique and memorable.

I Call My Brothers is an Interrobang Theatre Project production now playing at Rivendell Theatre, 5779 Ridge, Chicago until Feb 2. Check the website for specific dates, times, and tickets. Find more information about current plays in our front page recs and at theatreinchicago.com.