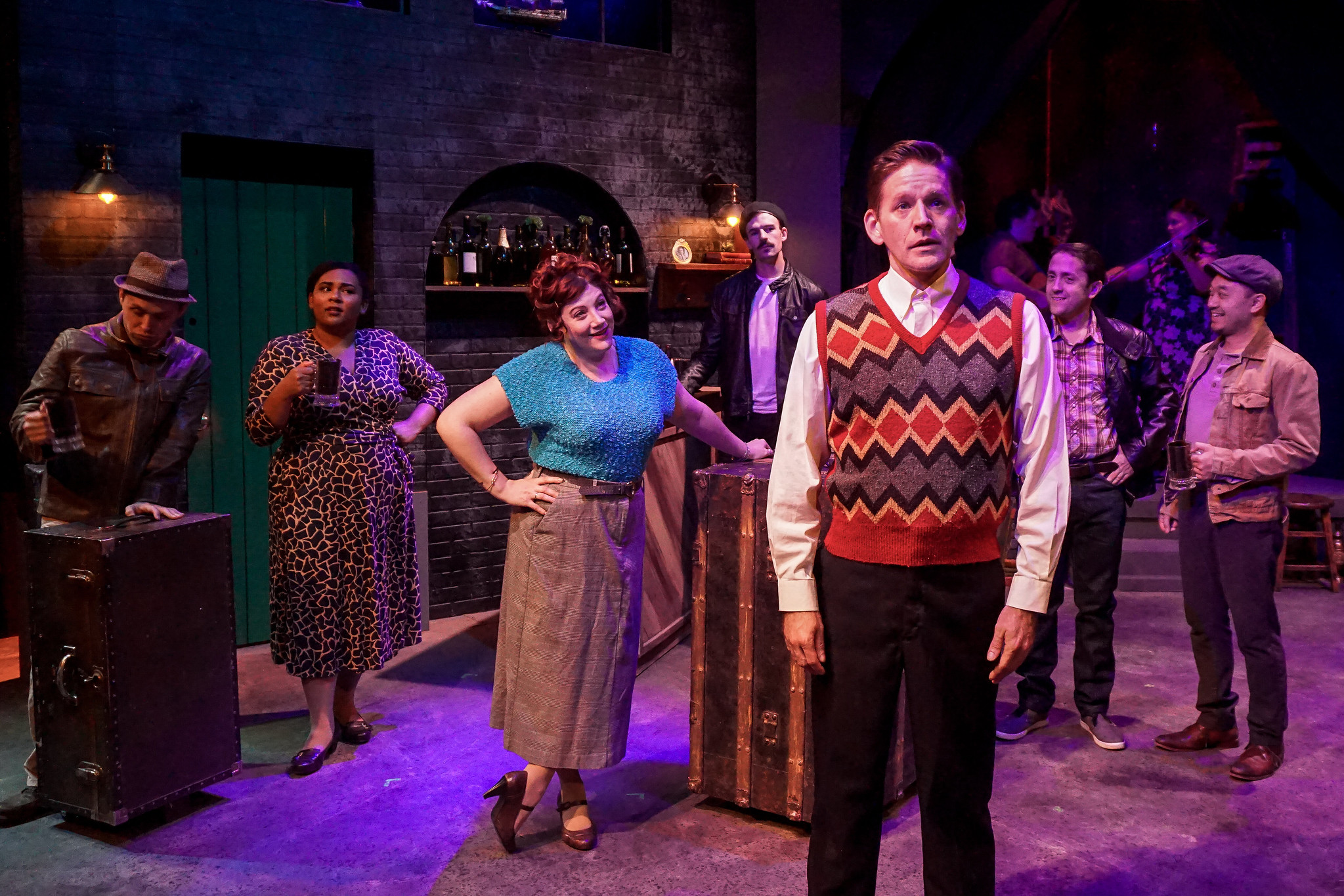 Dublin. 1964. A deeply closeted gay man, Alfie, works as a bus conductor by day while by night he tries to run a ragtag little theatre in a hall at his church, St. Imelda’s, directing plays by Oscar Wilde for tiny audiences. As A Man of No Importance begins, it appears that Alfie has seriously overreached: his current production of Wilde’s Salome has been deemed salacious by the church leadership, and the theatre is being closed down. Bereft of his beloved theatrical refuge—his only social life—Alfie feels alone, broken, persecuted.

The musical, written by Lynn Ahrens, Stephen Flaherty, and Terrence McNally, shows us how this man has found himself in this position. Told mostly in flashback, it is partly an indictment of archaic and homophobic hierarchies, partly a highly personal journey of one man vainly attempting to find love, and partly an homage to the healing power of theatre. It is a promising concept, but unlike, say, the threesome’s vibrant, beautiful and painful adaptation of Ragtime, it pulls too many punches (once quite literally) to be fully successful.

I’m a huge fan of Ahrens and Flaherty. Ragtime and Once on This Island are two of my all-time favorite shows, and I also thoroughly enjoyed Seussical and Anastasia. Thus I was definitely looking forward to seeing this one. With a book by gay icon McNally and direction by the talented Donterrio Johnson, it was right near the top of my fall “must-see” list. And that opening scene, which also contains a visual that includes the dreamlike figure of Wilde himself, certainly draws us into a show that focuses on the role that the theatre plays in helping this one gay man dealing with the “love that dare not speak its name.” Ultimately, though, neither element ends up feeling as powerful as it might have.

Let’s face it: we’re in the Pride Arts Center watching this play, so it is not at all surprising that Ryan Lanning’s quiet and unassuming Alfie is gay, nor that he is struggling with that fact in this time and place. He lives modestly with his sister Lily (wonderfully portrayed by Sarah Beth Tanner), who doesn’t understand how it is that her brother has never had a girlfriend. Along with her own boyfriend, local butcher Carney, played by Tommy Bullington, she thinks it might be due to his spending too much time locked up in his room with piles of books. Carney, unlike Alfie, is a very vocal part of the community: not only is he the lead in all of the plays, but he is also a very religious man, president of the church sodality. (And the audience, warned by the opening, sees the problem right away, especially when it is revealed the Carney’s part in this play is much smaller than he is used to.)

One of the issues with this play is that McNally’s book simply juggles too many minor characters. Johnson does an admirable job of moving them around on what is often a crowded stage and of giving each of them a moment in the spotlight, but their one-dimensional roles get in the way of developing the most important characters. This isn’t the expansive Ragtime, in which seemingly dozens of characters all are fleshed out brilliantly in several interwoven plotlines. This one follows only one narrow plot and just doesn’t make it interesting enough.

Lanning, who is certainly doing more with Alfie than the script gives him to work with, does have two ballads (largely unmemorable), in which he can explore his character’s inner world, the first wishfully declaring his philosophy (“Love Who You Love”) and the other sadly giving in to the reality of being gay in 1964 Dublin (“Man in the Mirror”). However, his abrupt decision to risk everything by testing the waters of Dublin’s gay underground seems to go against everything we know about him, and it isn’t enough that he is prodded on by the ghost of Wilde telling him that “the only way to get rid of temptation is to yield to it.” Alfie has spent his life paralyzed by his fear; if he would finally dare to act, it wouldn’t be in his back yard.

Also lacking development are the characters of Adele Rice (Ciera Dawn) and Robbie Fay (Nick Arceo). Alfie sees Adele as a perfect Salome but, though she is possessed of a secret of her own, the only song she gets is an early number shared with Alfie that helps her get over the notion that a small-town girl like her could never play a princess. Arceo doesn’t even get that much to flesh out Robbie. Oddly, we are given a deeper look into the St. Imelda’s Players stage manager, Baldy (Christopher Davis), a much less significant character than either of them.

More important than all of this, though, are two major problems, one with the play itself and one with Pride Films and Plays’ production. First is that the always-dependable tunesmiths Ahrens and Flaherty just don’t do their best work here. Unlike anything else of theirs I have ever seen, I couldn’t manage to recall a single song as I walked out of the theatre. There is nothing here that lives up to the standard of “Wheels of a Dream,” “Waiting for Life,” or even “Once Upon a December.”

The second problem is that the show (and this production), having presented us with the issue of someone forced out of the closet in this unforgiving time and place, just doesn’t go far enough. McNally’s book tries to find a way to bring everything to a sort of happy ending that seems unlikely and out of place. Johnson’s direction, fine elsewhere, downplays the horror of what happens to Alfie during his ill-fated night out, putting the harsh action offstage, and adds a pretty ridiculous final moment that utterly alters the very nature of one of the characters. This all makes for a tepid “feel-good” ending that denies what has happened before.

In the end, though I did enjoy parts of this musical and I had nothing but admiration for its very talented cast and musicians, it just didn’t work for me, and the blame lies with the banal score and wishy-washy script. This play is not even close to the standards set by Ahrens, Flaherty, and McNally. These actors—and for that matter these characters—deserved more.

A Man of No Importance is a Pride Films and Plays production now playing at 4139 N. Broadway, Chicago through Nov 10. Check the website for specific dates, times, and tickets. Find more information about current plays in our front page recs and at theatreinchicago.com.