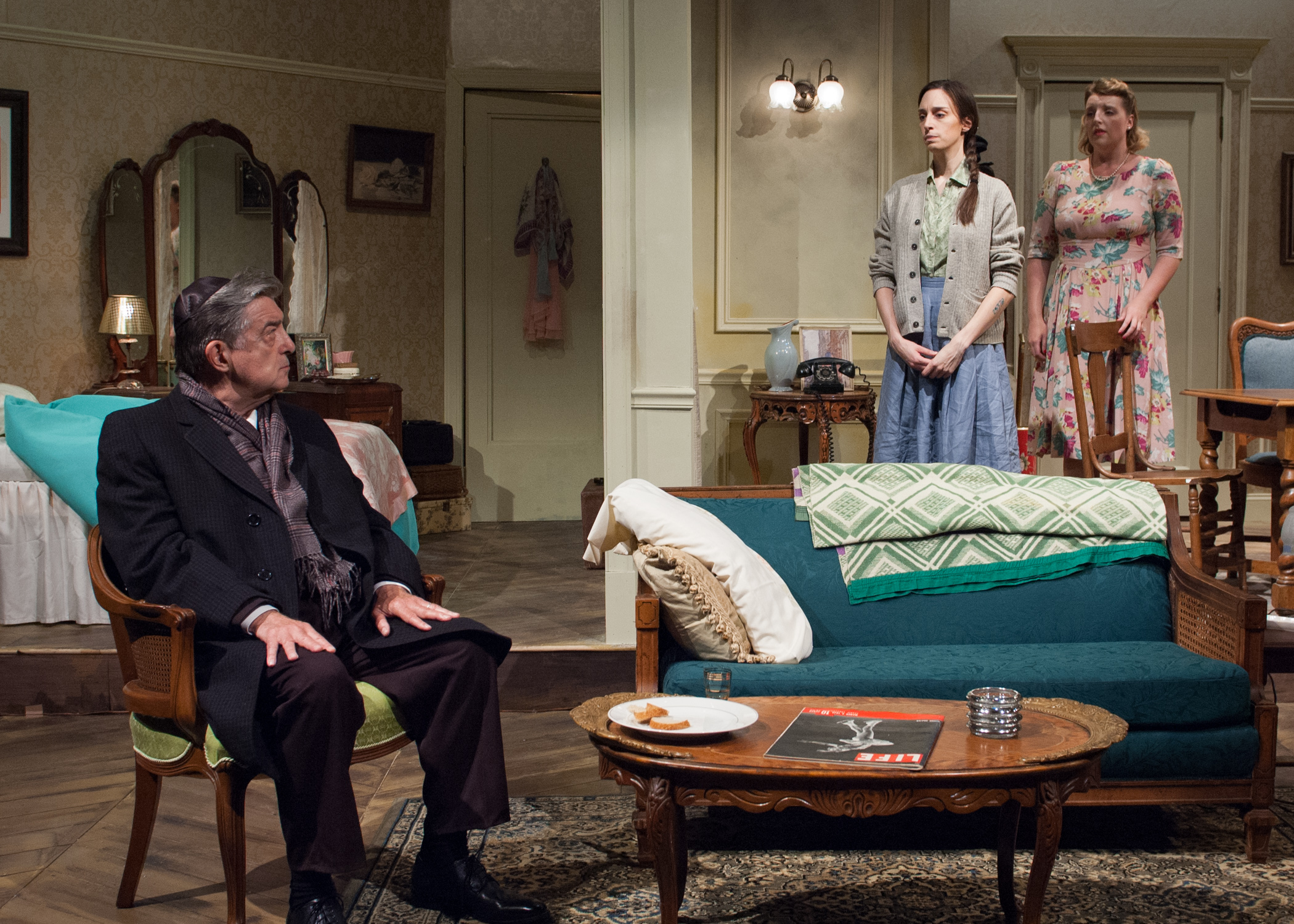 In an era when Nazis and white supremacists have gained influence in American culture and politics, when more than 20% of Millennials have no clue what the Holocaust was and a not insignificant number deny it ever happened, when we are adopting a hard-line policy on immigration that targets specific groups of people and even rips children from their mothers’ arms, it seems on the surface that the lessons learned from World War II have faded from the forefront of our joint understanding. How fitting, then, that Timeline Theatre has chosen to revive the 1984 drama A Shayna Maidel, which serves as a reminder both of the devastation that faced European Jews in the 30s and 40s and that these horrors did not happen to faceless people; they happened to families. 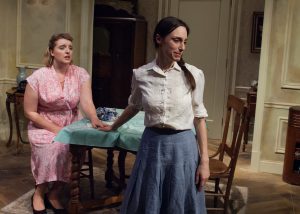 A Shayna Maidel (A Lovely Girl) is the story of one such family, a Polish Jewish family that was torn in half by the Nazis. It focuses on two sisters, Rose and Lusia Weiss, who have been apart most of their lives. Rose (Bri Sudia) was taken to America before the Depression by her father while Lusia (Emily Berman), ill at the time, couldn’t go, stayed behind with her mother, and ended up in a concentration camp. Now, after the war and the liberation of the camps, Lusia comes to America and ends up staying in New York with the stranger that is her sister. The play follows them as they slowly slip into each other’s lives, becoming the siblings that time and circumstance had prevented them from being and dealing with a conservative, demanding father (Charles Stransky) that one hasn’t seen in years.

It also focuses, using flashbacks and Lusia’s imagination, on the life Lusia had before the war: her relationship with her mother (Carin Schapiro Silkaitis), her best friend Hanna (Sarah Wisterman) and, most of all, her husband Duvid (Alex Stein). With her mother murdered by the Nazis, it is Duvid that Lusia is most focused on; her powerful belief (substantiated by almost nothing) that he not only survived but will find her keeps her going as she slowly assimilates into her new life. 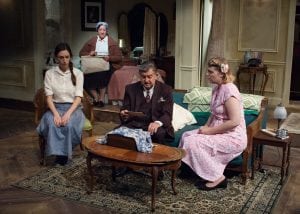 Director Vanessa Stalling has chosen her actors well. Sudia is outstanding as a woman whose life is suddenly all about her sister. Until now, Rose’s greatest concerns have centered on her overbearing father: can she continue to hide from him that she no longer even tries to keep kosher (and even that she has Americanized her name) and when will he pound on the door next with some demand. But when that demand is to put her life on hold to take care of a sister she has no memory of, Rose does as she is asked. Sudia’s portrayal of Rose’s rambling, quick-paced nervousness around a person who has suffered so much is a perfect counterpoint to the quiet, internalized performance delivered by Berman, who arrives in America speaking some English but reluctant to talk about the things she has witnessed. She is also overwhelmed by the “luxury” of the tiny one-bedroom flat in which Rose lives. Playwright Barbara Lebow gives Sudia and Berman each powerful solo moments during the play, and Stalling has drawn deeply emotional performances from both of them.

Stalling’s staging also helps as these women learn more about each other, as Rose begins to comprehend the immensity of what has happened to Lusia. A powerful scene has Lusia and her father Mordecai comparing notes about what has happened to (basically) everyone they have ever known. As more names come out and we are told that almost all of them have been murdered, Rose (standing silently upstage) is stunned; her father has never even mentioned most of these names to her. She learns of their existence in the same moment she learns that they exist no longer. 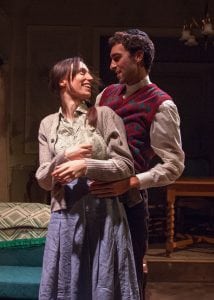 This same kind of staging within the confines of the intimate Timeline stage lets us see clearly when the play slips out of its central tale into a dream past. In these sequences, we meet Duvid, Hanna, and Mama, but the majority of them concern the deep love Lusia bears for her husband. Aided by some lovely lighting by Rachel K. Levy and a brilliant sound design by Jeffrey Levin, past and present—and present and dream—intermingle seamlessly. Levin’s use of sound to connect these expressionistic moments begins immediately, in the play’s prologue scene with the birth of a child who will become Mordecai, as the roar of the Cossacks’ horses as they stage a pogrom morphs into the sound of the door banging loudly in the middle of the night.

This is the second consecutive play I have seen (after Writers Theatre’s Vietgone) that explores the difficulties immigrants have with the English language. Both treat the “foreign” language—in this case Yiddish—as the natural tongue when its speakers talk to each other, using no accents at all. Playwright Lebow uses this as yet another means of sliding in and out of past and dreams.

A Shayna Maidel is not the kind of play that can have a traditional “happy ending.” (There is that outrageous matter of six million Jews murdered, after all.) But by focusing less on the overwhelming horror and more on the emotional reunions of people who have been apart for too long, Lebow allows us to feel the pain while at the same time occasionally laughing with Rose and Lusia as they fuse their connections. Because Timeline’s audience is within a few feet of the actors, we are placed right in the room with them, letting us share in their joys and pains. Stalling and scenic designer Collette Pollard bring us deeply into these lives and let the actors do the rest. The depth of our sympathy (or perhaps empathy) for these people is expanded because of it, and the power of an already potent script is multiplied. You will feel a wide range of emotions in this play—affection, concern, grief, love, sorrow—but what Lebow and Stalling clearly want us also to feel anger that this ever happened and hope that the moments of light in our lives can lift us up. With what is happening in our country and the world right now, we need that hope. This provocative play serves as a reminder and a warning, and seems more timely now than ever.

A Shayna Maidel is now playing at Timeline Theatre, 615 W. Wellington, Chicago, until November 4. Performance times vary; check the website at Timeline Theatre for tickets, schedule and times. Find more information about current plays on our Current Shows page and at theatreinchicago.com.