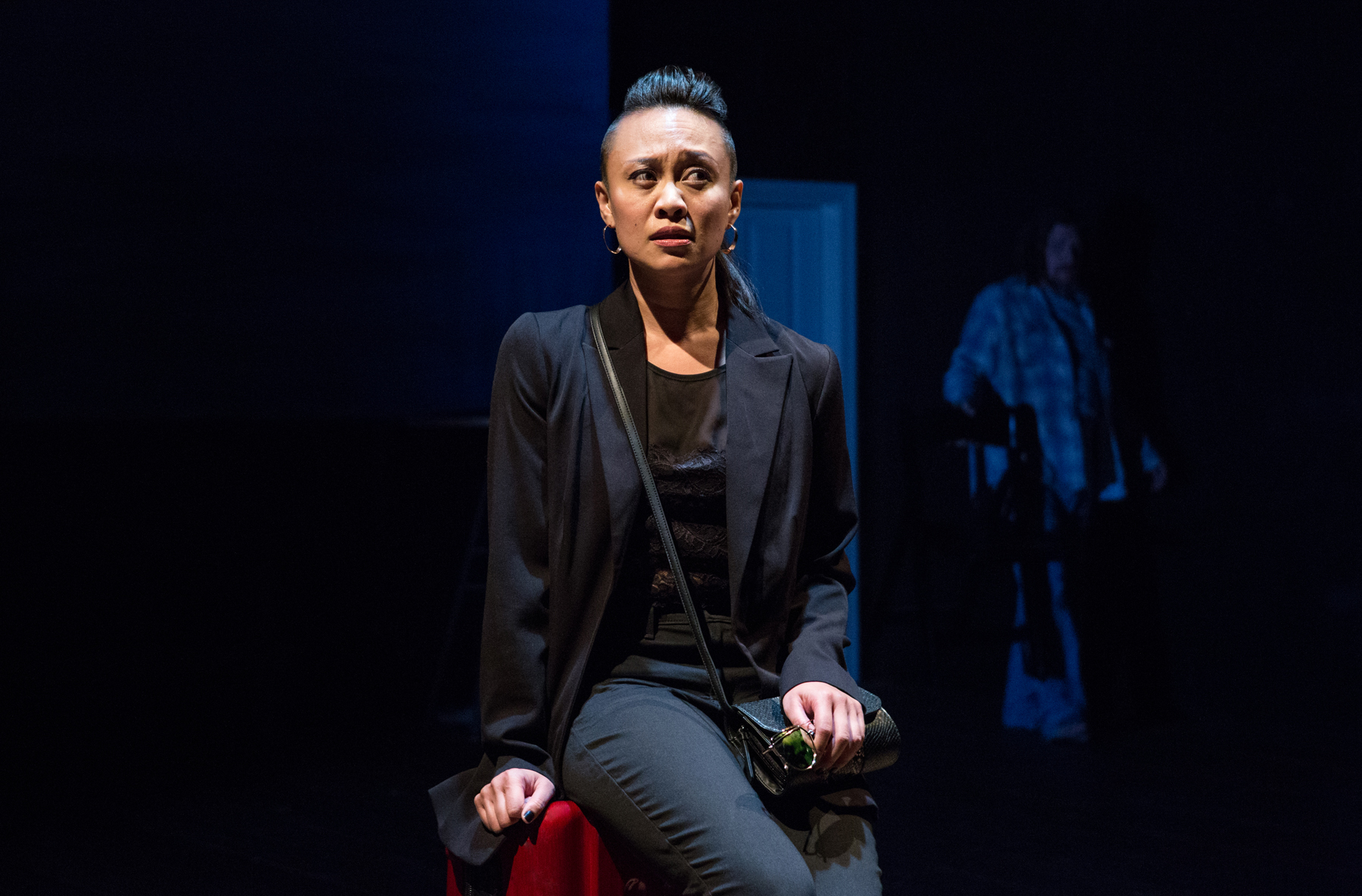 Leah Nanako Winkler’s Kentucky, now playing at Theater Wit in a production by The Gift Theatre, is a remarkable meditation on the nature of happiness and success: what does it mean? who gets to determine it? is it the same for everyone? In this sometimes funny and often poignant play punctuated by music, Winkler makes the argument that no one’s definition is universal through a focus on an event that most people would describe as happy: a wedding.

“Most people” does not include the play’s main character, Hiro (Emjoy Gavino), a nearly thirty New Yorker who is coming home to the Kentucky town she hates and the family she gratefully escaped from, against the advice of her therapist, to try to stop the wedding of her estranged 22-year-old sister Sophie (Hannah Toriumi). Despite not having seen her for seven years, Hiro is convinced that Sophie is throwing her life away by allowing herself to be trapped so young in a marriage to someone she has known for only six months. She believes that, like her, Sophie would be much better off discovering who she is in the Big Apple, and that her sister’s newfound devotion to born-again Christianity is proof that she is desperately trying to connect to something in a place where there are not enough options.

Popping pills and drinking bourbon to deaden the anxiety of being back in a place she dreads, Hiro finds that, as she had feared, time has pretty much stopped in a town she calls Bumfuck, Kentucky. Her father (Paul D’Addario) is still the drunken, volatile, profane redneck he always was. Her mother (Helen Joo Lee), a quiet Japanese woman who has done her best in a marriage to someone who verbally abuses her, is still perpetually in tears and always one small misstep away from a complete breakdown. Her old high school friends—the ones who remain alive after drugs and motorcycle accidents have claimed several of them—still hang out, get drunk, and talk about guys at the same bar.

The only solace that she can find comes from two very different sources, both played by the same actor (Martel Manning): Adam, a young man she vaguely knew in high school who has always had a crush on her and, in a whimsical touch by Winkler, an old cat named Sylvie. Martel has a lot of fun playing this anthropomorphic feline who is also the sole consistent source of affection for Hiro’s mother Masako, who feels that she has been abandoned by Hiro and now Sophie. It’s a brilliantly comic turn that couldn’t be more different from sincere lover Adam, who wants Hiro to remain and build a life with him.

Hiro, who seems to define her own success in terms of money (she is forever reminding people that she has a great job and makes $60K per year, though that doesn’t go as far in NY as she might like it to), is an emotional disaster. Conversations with her therapist Larry (played by Ana Silva who, along with Maryam Abdi, also plays Sophie’s bridesmaids and a kind of miniature Greek chorus) reveal that she is enough of a wreck back in the city that, though he cares for her, Larry is rather sick of her too. Now, surrounded by memories she’d like to have left in the past, she is determined to save Sophie by convincing her to return with her to New York, not even considering her sister’s own ideas and desires.

Director Chika Ike has done a wonderful job both with movement on this large, bare stage and with her talented cast in developing their characters. That includes a touching performance by Emilie Modaff as a high school friend of Hiro’s who remains hopeful that their friendship can survive despite the fact that Hiro never returns calls or texts. (An unrecognizable Modaff also has some fun as Hiro’s gruff, chain-smoking grandmother.) In addition, the actors portraying Sophie’s fiancé (Ian Voltaire Deanes) and his parents (Michael E. Martin and Jessica Vann) are able to forge a family of likable, non-stereotypical, and sincere born-again Christians, making it pretty easy to see why Sophie wants to marry into them.  The contrast between this loving family and Sophie’s highly dysfunctional one could not be clearer.

But despite an entire ensemble’s worth of excellent performances, the play belongs to Gavino’s Hiro. Unable to put up whatever façade of strength and self-confidence allows her to survive in New York, her hometown Hiro is a hot mess. Not only does she display all sorts of self-destructive behaviors (the pills, the alcohol, the sleeping with casual male friends), but—while she focuses on the familiar emotional issues wrought by her parents—she completely fails to see the composure and growth within what had once been her equally self-destructive sister. The contrast between the sisters is driven home by a nice touch by Winkler: giving them the exact same speech to highlight the moment that they became aware of themselves as fully realized women. Sophie’s version is impassioned and joyful, but Hiro’s is more plaintive, an attempt to convince herself that it is true.

Kentucky is a well-crafted, cleverly-directed, and powerfully-acted play that is built upon the old bromide that “you can’t go home again” but reveals itself to be something more. It’s a play about happiness and success, the fact that we each must determine these things for ourselves, and the reality that we do not always get what we want in our lives. Hiro manages to symbolize both of these latter notions as she struggles with her less than satisfactory ideas about the first. This is a thoroughly unexpected piece, and one trip to the Bluegrass State well worth taking.

Kentucky is a The Gift Theatre production now playing at Theater Wit, 1229 W. Belmont, Chicago, through Nov 16. Check the website for specific dates, times, and tickets. Find more information about current plays in our front page recs and attheatreinchicago.com.