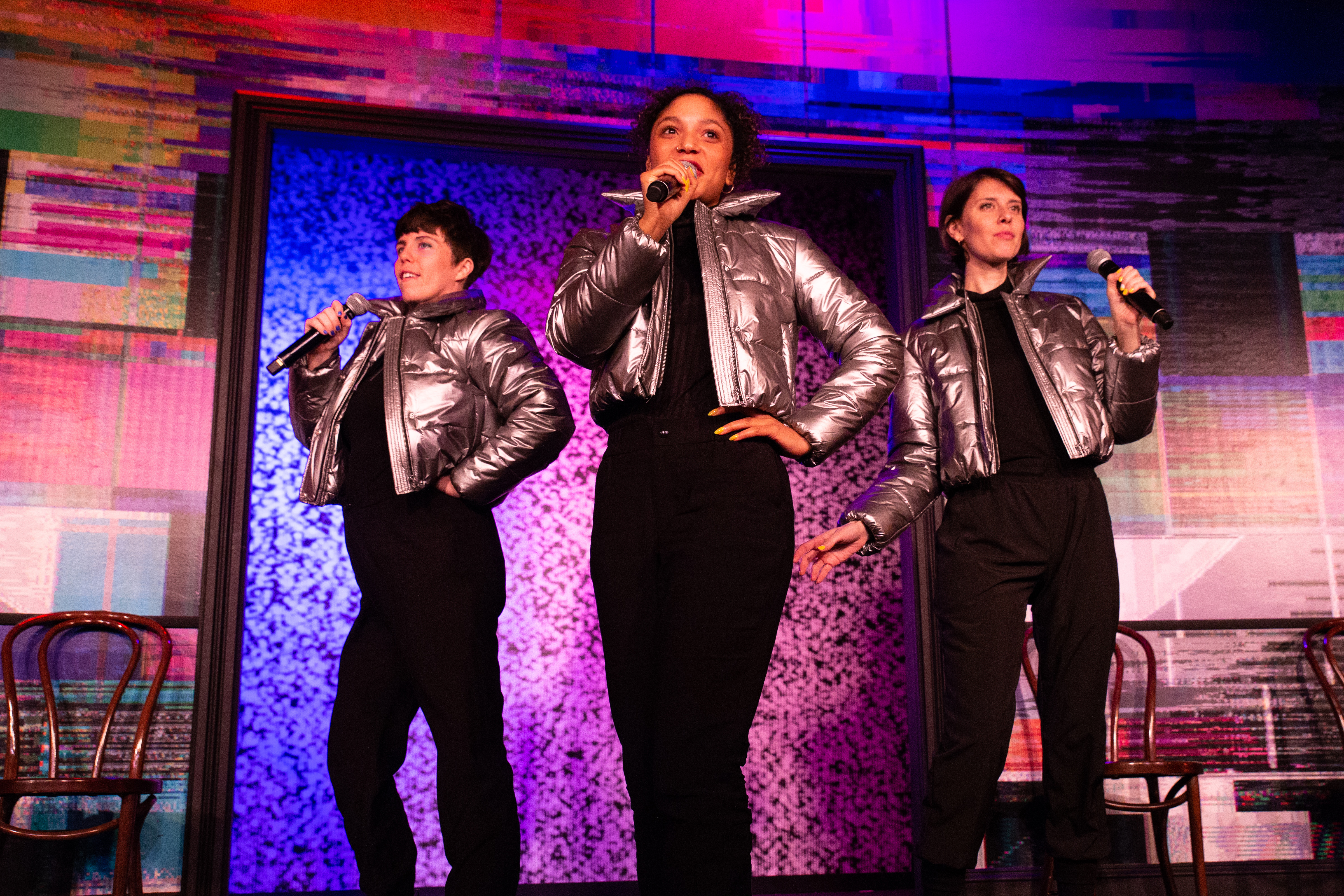 If you’re looking for uproarious laughter around the holidays in Chicago, you could go to see the touring company of The Play That Goes Wrong. Or you could opt for something homegrown, spend a lot less money and be thoroughly entertained by going to see Second City’s 107th revue, Algorithm Nation or The Static Quo. This show may not be Second City at its very best, but it contains enough A-list material to leave the opening night audience very happy.

The conceit of Algorithm Nation is that Second City has collected data on all of its audience members, fed it into a comedy algorithm, and come up with the perfect show to entertain that night’s particular audience. The algorithm, in fact, functions as a seventh ensemble member at times, represented by a bare light bulb that flashes as it “talks.” The whole thing is a send-up of the algorithms that foist ads on us through our computers, allegedly because they think we will have an interest, though why mine believes I am interested in sweatshirts made to look like a guy’s hairy beer belly I have no idea. Actually, that is the message of this uneven but still very funny show: the programs that are meant to serve us may actually be dictating our lives. Not a super original thought, but one that the talented members of this cast (mostly first-timers to the mainstage) can mine for whatever it is worth.

The show opens with the very funny Jeffrey Murdoch tied to a chair and gagged like a hostage while Nate Varrone sets up the show. The bit, which features Varrone “beating” Murdoch with a foam noodle, is indicative of the unevenness of the entire show: Varrone is hilarious returning to his “scripted” words to the audience after having been interrupted by Murdoch, but beatings just aren’t funny. Neither are guns, and there are lots of guns in this show. Apparently, the algorithm felt that last night’s crowd was really interested in senseless acts of violence.

Fortunately, the show settles down quickly after that, lampooning well-meaning white liberals in a sketch in which they try too hard to prove how “woke” they are to a new black couple who have just moved in (Tyler Davis and Kimberly Michelle Vaughn, both of whom are wonderful all night long). Then the Equal Time clause of the algorithm must kick in, for the very next sketch makes fun of Trumpian conservatives trapped in an Escape Room. The revue isn’t through making fun of Trumpies, either: the hilarious Ryan Asher takes the stage for a view of a “Women for Trump” rally. She is solid and energized, but the sketch doesn’t know when to end, a common problem during this revue, as many sketches just fizzle at the end and some, like this one, go on too long.

Technology is roasted within sketches as well as in the overall algorithm device. (“Back in the day, if you had twelve followers you were the son of God.”) But some of the evening’s most successful sketches stem from simple or familiar moments: a father wanting to bond with his fourth grade daughter while she is concerned about being the only black girl in an all-white class, a couple coming home from a movie fearing there is someone in the basement, a Palestinian Uber driver attempting to find the right music for his Jewish passenger, a couple of talk show hosts looking back on their years together with “Best of” clips that violate every principle of #metoo and even make them cringe, Emma Pope’s “romance writing class” that takes the book’s setting from the audience, a long scene at the end interviewing a random “hostage” taken from the audience. (In fact, that reminds me: Second City is at its best when it utilizes audience involvement, but this show, though it really gives that one audience member a chance to shine, mostly doesn’t use the audience at all.)

Even if it is not the best revue they have ever had, though, this is Second City, and uneven Second City is still more hits than misses: I suspect it will highly please its audiences over the coming months, even if, as Davis tells us before kidnapping the audience member, the algorithm is broken.

Algorithm Nation or The Static Quo is a Second City production now playing at the Second City, 1616 N. Wells, Chicago in an open run. Check the website for specific dates, times, and tickets. Find more information about current plays in our front page recs and at theatreinchicago.com.