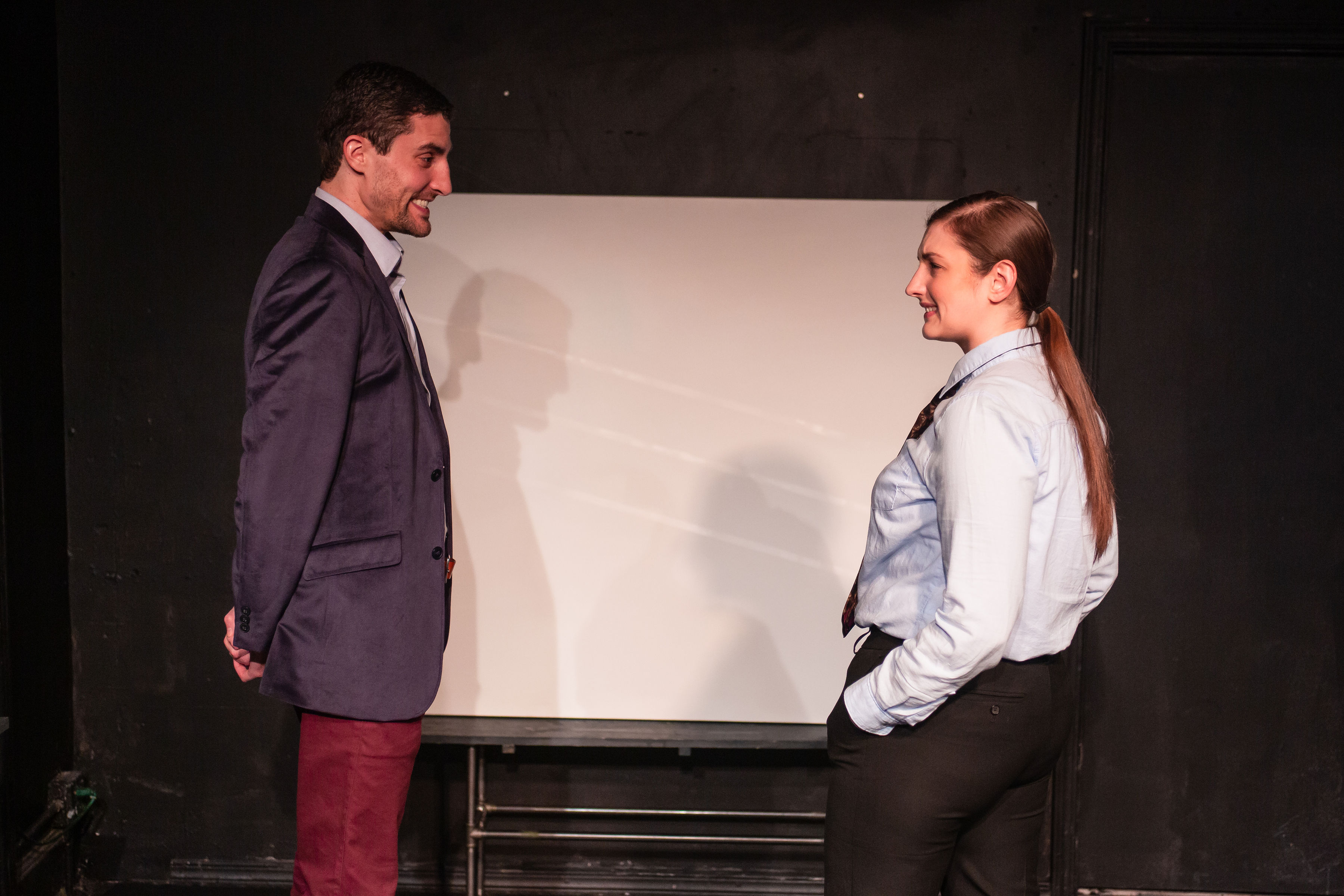 The first time I ever saw Yasmina Reza’s Art (translated by Christopher Hampton) it blew me away. The complications that arise when one of three best friends buys a piece of expensive art that consists of a white canvass made for compelling theatre, especially once you realized that the play says as much (or more) about friendships than it does about art. The dynamics of a long-term relationship are complicated, even more so than what makes good art, and Reza’s play explores them without pulling any punches.

That’s what makes Theatre Above the Law’s production of the play unusual. Director Tony Lawry chose to cast the three male friends without regard to gender in an effort to find the right kind of chemistry among them. The result (one of them is played by a woman, Brittany Vogel) is one that puts the group’s dynamics front and center. Even with the presence of that large white painting (which its buyer insists, contrary to the report of our eyes, is not white but composed of other colors as well), our focus goes to the people around it.

It isn’t a wholly successful experiment, but it is interesting. With her long ponytail and a costuming decision that does nothing to hide the fact that she is a woman, Vogel is fighting against the current from the first moments. Ten minutes into the play, the woman in front of me leaned over to ask her friend why they kept referring to her as “he.” I had to acknowledge that I was having a similar problem: I knew why, but it was a distraction I didn’t need as I tried to immerse myself into the show. Still, Vogel’s performance (as Marc, the least empathetic of the friends) is fine: if she can’t make us forget that she is a woman, she does at least embody the caustic streak that compels Marc to laugh at his friend’s purchase without caring about his reaction.

The other friends are played by Jeremy Schaye (Serge, who buys the painting) and Dan Sauer (Yvan, who is clearly the third friend in this dynamic, a man who simply refuses to make his own opinions known for fear of hurting his friends’ feelings—the opposite of Marc). Schaye is solid as a man who has spent a fortune on an avant-garde piece of art and finds himself attacked for it by his friends, and Sauer has a wonderful time with his character, who is very me-centered (his impending wedding is nothing but problems and he’d like his friends’ sympathy) and afraid to risk the bonds of friendship by making his opinion of the painting known (which would risk losing what he feels are the two things in the world that calm him down).

Still, it is Vogel that must supply the energy in this trio, and she does. Marc’s sharp disdain for the notion of buying into the whole pseudo-intellectual realm of stereotypical art connoisseurs who think they know more than others because they appreciate the avant-garde is the catalyst for the play’s nearly non-stop arguments. Vogel builds to a crescendo of frustrated anger that threatens the stability of a fifteen-year friendship and allows for the blow-up that occurs. But there is something artificial about that anger: the art alone doesn’t warrant it, and many times it seems that Vogel is just seething for the sake of seething. It becomes clear that, despite his claims, it is Marc himself who is the “superior” one: he is highly judgmental and abrasive and not at all willing, at least in the scope of the play, to mediate his emotions.

The question of just how we measure friendship is at the core of Art. Several times characters ask why, if they hate each other so much, they stay together, and the answer is simple: each of them needs the other two. Serge needs the validation of two of his best and longest-term friends. Yvan needs to be around people who don’t (usually) drive him crazy. And Marc needs to feel that his friends look up to him as an arbiter of taste. And that is why he gets so bent out of shape about the art: not because it is a white canvass but because he can’t believe that Serge would spend so recklessly without consulting him.

As I said, the experiment of gender-blind casting here works to a degree, but could have worked better. Vogel is up to the challenge, but a wig and better costuming might have helped the audience’s suspension of disbelief. This is a tiny storefront operation with no real budget, but if you’re going to do something interesting, do it all the way. I appreciated what Lawry was attempting more than I accepted it, and that is a problem. Still, this cast does a very nice job of conveying the intertwining characteristics that create (and can break) friendships, and the play, whether it works for you completely or not, never fails to be interesting. I didn’t regret the trip out on a wintry day to see it, and that in itself says something.

Art is a Theatre Above the Law production now playing at 1439 W Jarvis, Chicago, until Mar 3. Check the website for specific dates, times, and tickets. Find more information about current plays in our front page recs and at theatreinchicago.com.