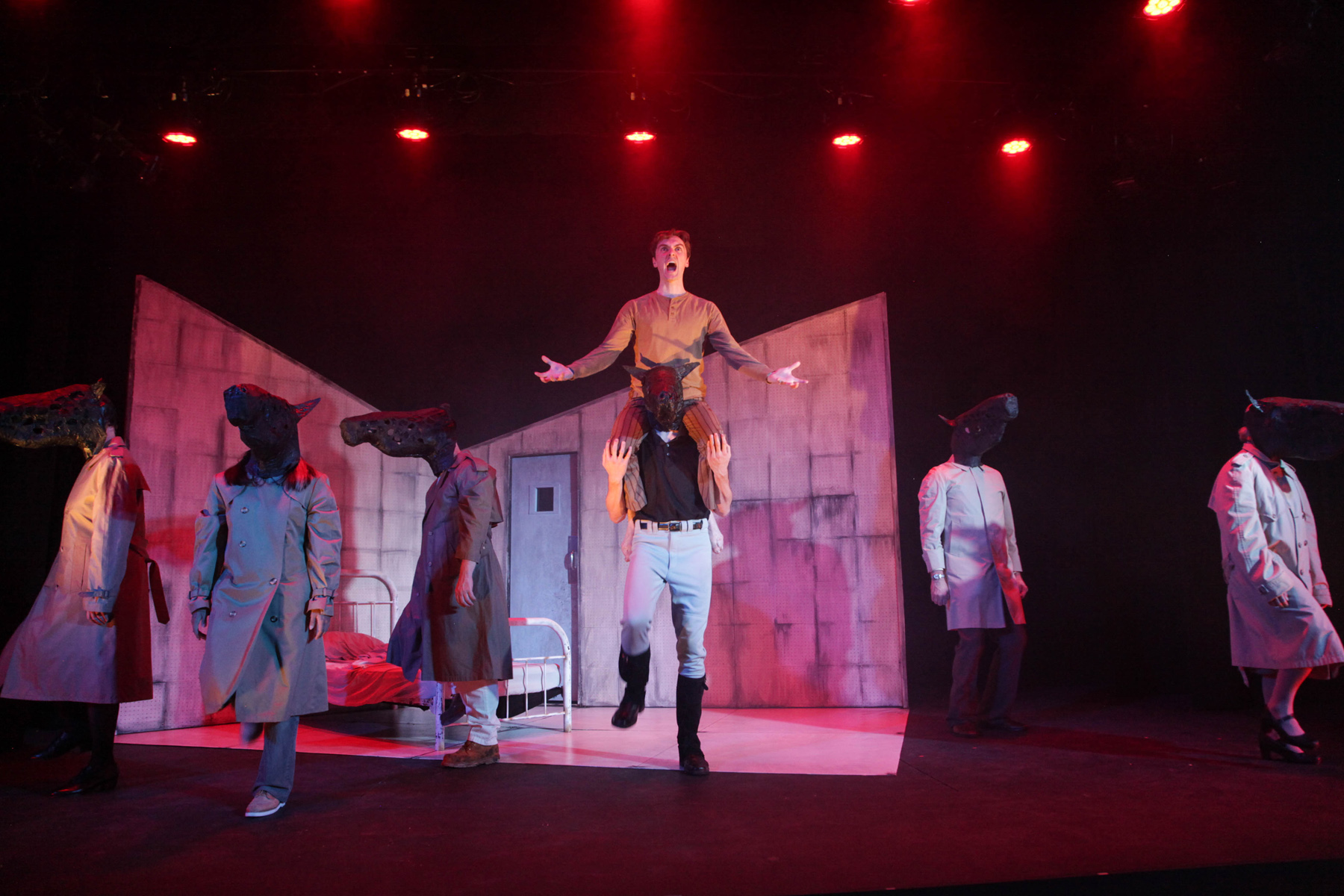 The first time I saw Peter Shaffer’s award-winning psychological drama Equus was in its initial production in Chicago back in the late 70s, not long after its 1974 Broadway premiere. If memory serves, Ken Howard of TV’s “The White Shadow” played the starring role of troubled psychiatrist Martin Dysart. As a college student, I was given tickets in bleachers right on the stage for this intense, devastating play, which created an indelible up-close-and-personal experience the likes of which I have rarely felt since. Those frightening wired-faced horses were mere feet from me, as was the actor playing Alan Strang, the sexually and religiously confused young man who sees them as his gods but blinds them in a fit of rage with a metal spike.

Both his love for the horses and his inconceivable action toward them are clear from the outset of Shaffer’s play, which itself derived from a news story that a friend had shared with him in 1971. Equus takes off from the bare bones of that incident and imagines, as Dysart tries to figure out why Alan did such a horrible thing, what twisted and contorted mental state would make it possible. Now playing in an AstonRep production at the Edge Theatre, the play and its psychology may seem a bit outdated, but it has lost none of its inherent drama.

AstonRep co-Artistic Director Derek Bertelsen (who did a fine job on last year’s The Laramie Project) directs a very game ensemble in a show you don’t see revived that often partly because it calls for a lengthy nude scene in the second act. (Shaffer, who knew he was doing something revolutionary, felt that the nudity is critical for the powerful climactic moment to work. Daniel Radcliffe, seeking to get past any possible post-Harry Potter typecasting, famously played Alan in Broadway’s 2009 revival, about the most anti-Potter role he might have found.) Bertelsen’s treatment of the scene powerfully strips both the body and the psyche of the character, ripping him raw right in front of us.

Of course, that would not be possible without a strong actor in the role of Alan, and Sean William Kelly unabashedly throws himself into the disturbed young man’s internal chaos. His intensity is palpable even when he is simply staring down Dysart (Rian Jairell) or his mother (Julie Partyka) in utter silence, and when he explodes with incredible passion in scenes at the end of both acts, he leaves nothing behind. It is exactly what the role requires: the complete sacrifice of self-consciousness. More than most roles in the theatre, this one requires an actor to inhabit his character in both body and mind, and Kelly is up to the task.

On the other side of the psychiatrist’s couch (or in this case office) is Martin Dysart, a man who has come to understand the deep sacrifices we all make to the god of Normalcy. Dysart, assigned to help this boy to deal with the forces in his life that led him to blind the horses, discovers in his patient a monumental capacity for passion that the Normal world takes away from almost all of us. Using his own dull and repetitive life as a standard, he begins to believe that we each end up losing touch with the essence of our souls as we strive to fit into society. In his sessions with this boy who has created extremes within his mind and acted upon them, he starts to feel something unexpected: jealousy. Dysart is a man who finds the life he lives to be a sedentary lie that he cannot do anything about other than take an annual jaunt to the Mediterranean to explore vicariously the far more raw world of the ancients.

This is part of the problem I had with Jairell’s portrayal. There is no doubt that he gives a powerful performance, but his version of the character is so openly frustrated with his existence from the start that he has nowhere to go. Example: there should be a significant distinction between his facial reaction to Alan’s mother’s exposure of the depth of her religious fanaticism (while Dysart ought to be in his most professional mode) and the one he shows when Alan is acting out his final scene, but Jairell wears his heart on his sleeve in both instances. (If anything, his reaction to the Partyka’s sharp, forceful outburst is actually stronger.) There needs to be more evidence of the man we see actually questioning Alan, the doctor who understands that, though this boy before him has achieved an emotional high that he will never be able to duplicate in his own mundane life, he still must remain as his sacrifice to the Normal has limited him to be: the focused, professional watcher. Constantly on edge both facially and vocally, Jairell’s Dysart never quite seems, despite what he tells us, capable of subverting himself to what society demands of him.

The rest of the ensemble is very strong. Robert Tobin, who plays Alan’s atheist father, a man who has made his own sacrifices to the Normal, shows us the complexity of the home life that has played a role in confusing the boy. Alexandra Bennett is excellent as Dysart’s friend and confidante Hesther, a magistrate whose pity for Alan begins all of this. Malia Hu is open and genuine as Jill, the girl who introduces Alan to the stables and with whom he has an ill-conceived tryst. Jordan Pokorney and Andrew Whatley round out the fine cast in multiple roles.

Bertelsen’s depiction of the horse scenes highlights their importance and the frightening power that overwhelms Alan. Why, the boy wonders at one point, do these giant, magnificent beasts not crush us instead of bearing us on their backs? Between Bertelsen’s staging and Kelly’s performance, we can see both Alan’s powerful fervor and the profound anger and frustration that undoes him.

AstonRep’s Equus is well worth seeing. Despite its too-simple psychology, the play still works as an intense, heightened drama, and this company, led by a director who clearly loves exploring the twisting, muddled pathways through his characters’ minds, really delivers. And, despite my reservations, Jairell’s lead performance is certainly enthusiastic and compelling. But this production ends up as a true showcase for Kelly, a young actor I hope to see a lot in the future.