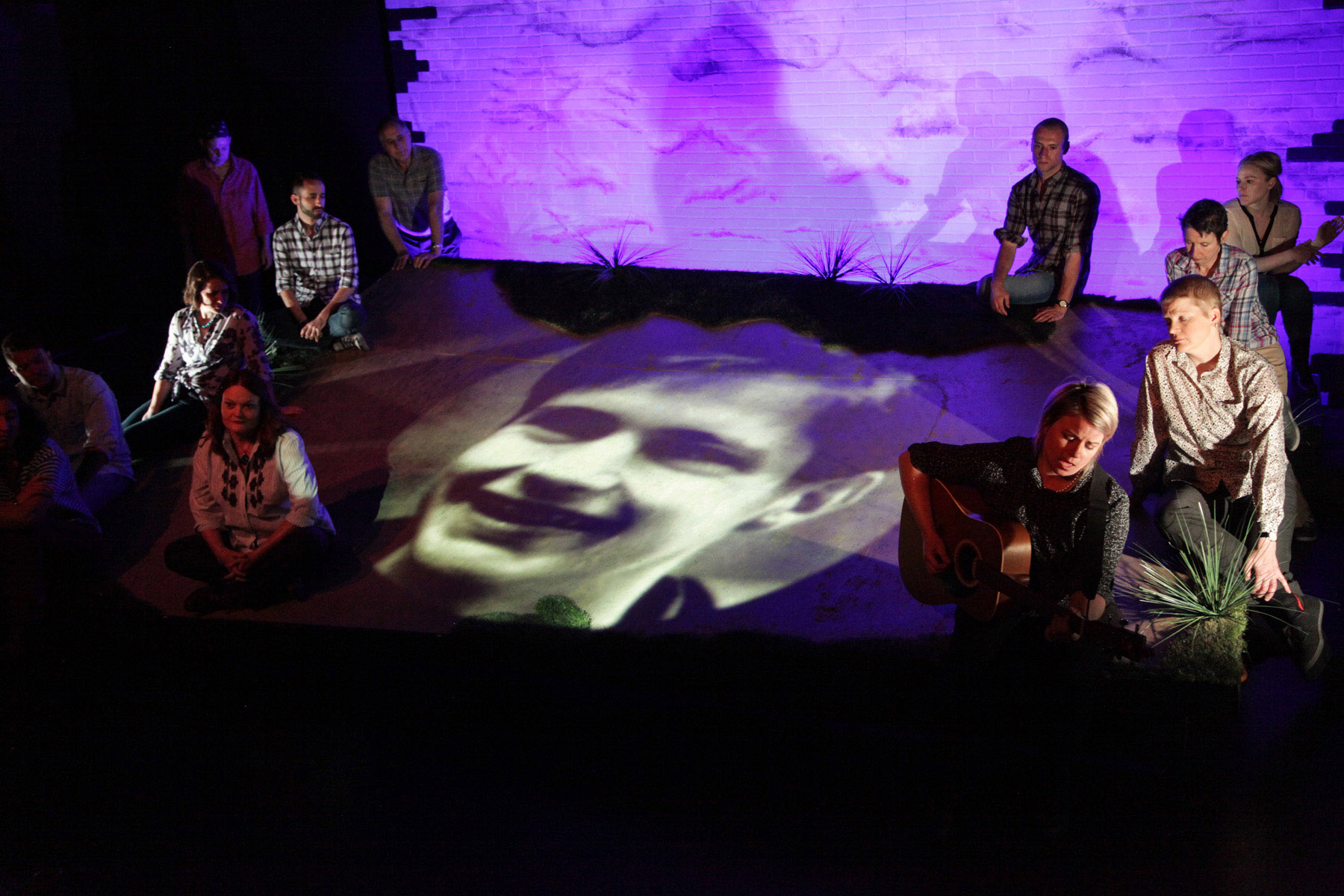 I’m not altogether certain that, given good actors and a good director, it is possible to do The Laramie Project poorly. It is a play whose very subject and structure pull at the heartstrings, eliciting all sorts of emotional reactions before it is through. Even a bare-bones production is likely to do the source material justice, and any embellishment is not really necessary. That being said, though, there are some productions that manage to move beyond the norm in provocative ways. AstonRep’s Theatre Company’s version, now playing at Raven Theatre, is one: with brilliant performances, the addition of music and some nifty visual elements, it pushes the play about as far as it can go. It is a powerful, beautiful production.

Laramie, for the uninitiated, tells the (true) story of the brutal murder of Matthew Shepard, a gay University of Wyoming student who, in 1998, was beaten severely and left, tied to a fence, to die in a case that ultimately led to the adoption of hate crime laws. Members of Tectonic Theatre Company, a New York based troupe, traveled to Laramie several times in order to interview its residents about how the case had changed their community. The play is a compilation of those interviews; its characters are the townspeople of Laramie and the members of Tectonic Theatre. Each actor plays multiple roles, and by the time it is finished we have a portrait of a town rocked by and (sadly) defined by a tragedy. Like Columbine and Waco, the mere mention of the town’s name evokes a kind of nightmare that lingers far beyond the actual event. 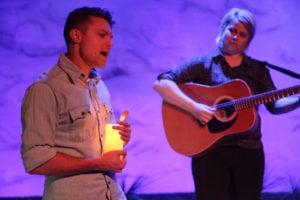 Director Derek Bertelsen’s vision for the show adds music played by several different ensemble members. Songs we know (“Rocky Mountain High,” “Take Me Home Country Roads,” “Leaving on a Jet Plane” mix with some we may not know (“Kansas Summer Sky”) as the music adds poignant commentary to the proceedings. There are other elements too, such as a projected image of Shepard himself and a couple of surprises in the lighting design by Samantha Barr, that add to the compelling story being told. Shepard’s story doesn’t need these additions, but they work perfectly in a production already marked by solid performances by the entire ensemble.

With a total of 62 roles played by the twelve-member cast, The Laramie Project is a challenging actors’ show. Among the most remarkable characterizations: 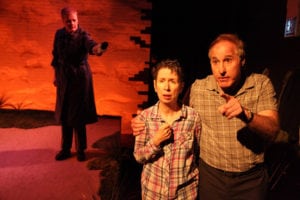 Rob Frankel takes on all of the older male roles, including the extremely powerful final monologue by Shepard’s father in which he grants clemency instead of death to Aaron McKinney, one of the murderers, who never showed or even feigned any kind of remorse. Frankel’s breaking voice combines with the solid stance of a man wanting to be strong for a dead son to create a stellar portrait. Matthew Harris plays, among other roles, Jedadiah Schultz, a young actor whose decision to play a scene from Angels in America causes a rift with his conservative parents. Alexandra Bennett plays the head of the hospital where Shepard was taken and where he died; her medical updates sporadically interrupt the show, and her response to the death itself is a brilliant piece of acting. (She also plays both a Baptist minister and his wife: fun casting!) Roberto Jay plays a young gay man who thinks nothing at all has changed after the killing as well as the owner of the Fireside. Sara Pavlak Maguire similarly inhabits the role of Reggie Fluty, a police officer who, in responding to the 911 call for Shepard, exposes herself to HIV, and Amy Kasper (who also excels as a Unitarian Minister) plays her very concerned mother. 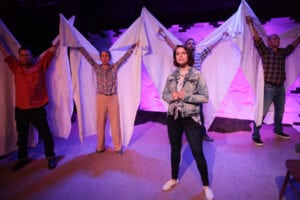 The entire ensemble offers such compelling performances. Chelsea Turner plays several roles including a Muslim woman who understands the realities of acceptance of differences in Laramie. Dana Anderson’s defiant take on Romaine Patterson, a lesbian university student who arranges a protest against Fred Phelps (Frankel again), is wonderful. Peter Surma plays both Aaron McKinney (whose hateful personality he captures well) and, more enjoyably, a bartender at the Fireside Bar who was one of the last people to see Shepard alive. Among Erin O’Brien’s several roles is a concerned lesbian professor at the university who feels threatened by the violence done to a member of the LGBTQ community. Liz Cloud plays many of the older roles including the grandmother of Russell Henderson, the other killer. Her silent shaking when the sentencing comes down (consecutive life terms) reminds us of how the actions of these monsters affected those closest to them. And Ray Kasper has one of the most memorable roles as “Doc” O’Conner, a congenial local limo driver.

To their credit, through all of the various characters and accents and demeanors portrayed in this show, I don’t think any member of the ensemble plays anything even close to the same characterizations with different roles. After just one or two appearances, the distinctions between the characters (aided by minor changes by costumer Uriel Gomez) are uniformly clear . Director Bertelsen’s efforts with them shines through every word of this play, and the final image as “Doc” describes the physical beauty of Laramie is a lovely effect.

The Laramie Project is one of those shows where the script alone almost assures a strong production, but this is one of the finest you could see. Every element comes together in perfect harmony to make the horrifying and emotional tale stay with you long after the play ends. It is a moving example of what theatre can be.

The Laramie Project is an AstonRep Theatre production now playing at Raven Theatre, 6157 N Clark Street, Chicago, until July 8. Performance times may vary; check the website at Aston Rep. Find more information about current plays on our Current Shows page and at theatreinchicago.com.