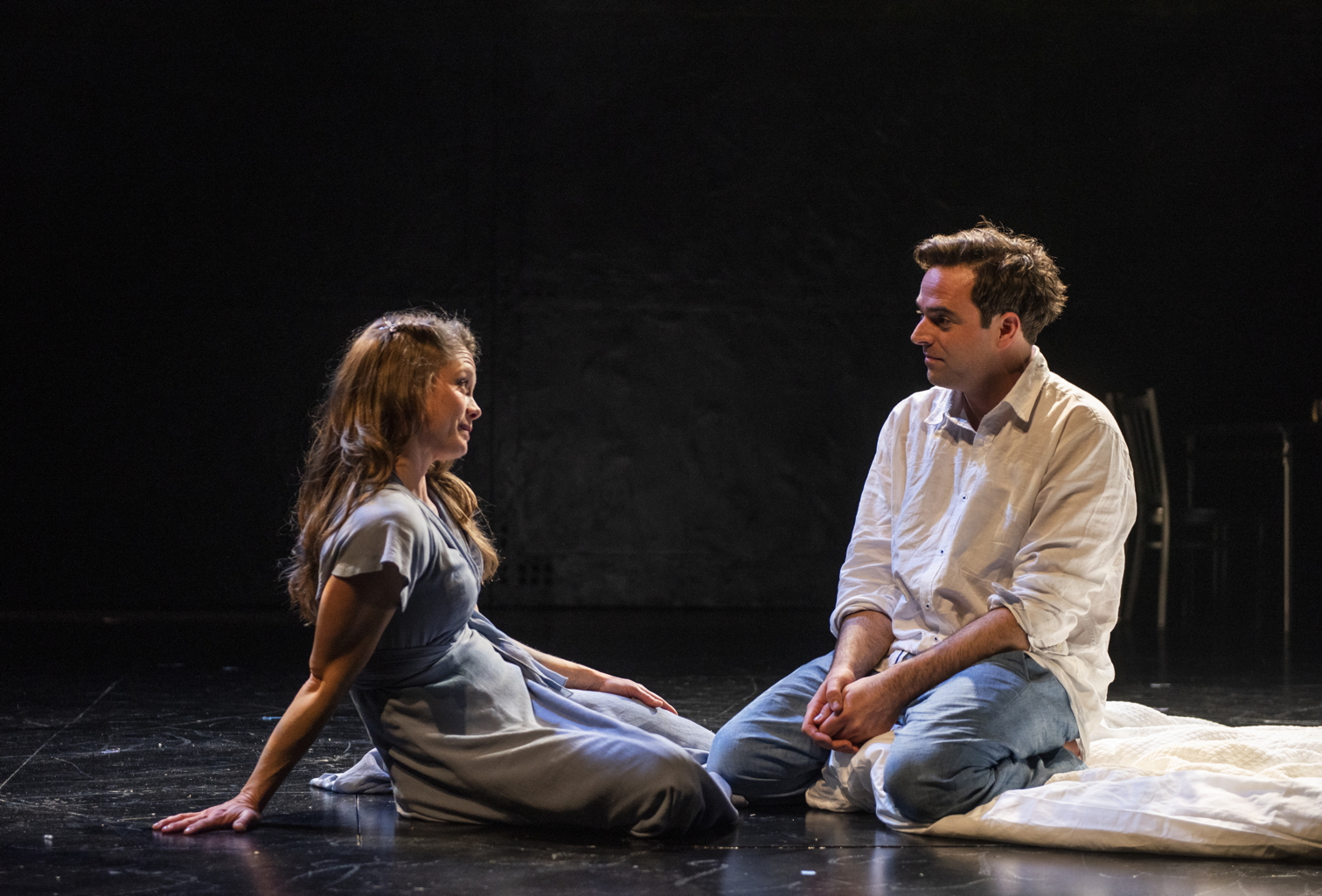 “I am an American, Chicago born – Chicago, that somber city – and go at things as I have taught myself, free-style, and will make the record in my own way: first to knock, first admitted; sometimes an innocent knock, sometimes a not so innocent.”

With these words, Saul Bellow began his 1953 masterpiece The Adventures of Augie March, a picaresque examination of the life of a kind of everyman who spends his life searching for something he can’t quite name, despite having read just about every book of philosophy ever written. Pulitzer Prize-winning playwright David Auburn (Proof) has adapted Bellow’s work into a play, now enjoying its world premiere at Court Theatre under the direction of Charles Newell. The drama, though three-hours-long, can’t fit in even half of the adventures in the novel, but Auburn has still created a piece that captures the imagination, retains a lot of Bellow’s poetic language, and manages to have a bit of fun along the way.

Patrick Mulvey plays the title character both as a teenager and an adult at various ages in this production that endeavors to provide a straightforward throughline to a narrative told by a man recapping his life without regard for any kind of narrative arc: Bellows’ Augie is simply telling his story, moving from event to event with no attempt to bring order to the whole, the cumulative effect of his adventures creating an unforgettable character. Because that would not work onstage, Auburn instead chooses to create that order, selecting representative sequences from Augie’s desultory life that manage to flow logically and mimic more expected character development. After opening with Augie having survived the torpedoing of his merchant marine vessel in WWII, establishing a moment from which the story can be a flashback, Auburn dives back into Augie’s early family life, which shaped him into the kind of person he becomes.

The play’s somewhat slow first act shows us his life in a rough part of Chicago, living with a nearly blind mother, an older brother who may love him but is not always fair to him, a younger brother who is extremely developmentally disabled, and a demanding older woman who is not related to him but whom everyone calls “Grandma” (Marilyn Dodds Frank). His father has left some time earlier, leaving brother Simon (Luigi Sottile in an aggressive and powerful performance) to try to bring home enough money to make ends meet. Simon has big, specific dreams: he wants to marry a rich girl, work for her father, and become wealthy himself. In pursuit of these goals, he will not get bogged down by such inconsequential matters as love; he just inexorably heads down the path to lead him where he wants to go.

Augie, however, is unable to set simple and uncomplicated goals; instead, he rolls from one experience to another in search of whatever life is supposed to bring to him, following others without a real life plan of his own, in the spirit of picaresque heroes before him. He briefly lets himself get talked into being a robber; he manages to get a job with a very rich man who treats him like family; he follows a friend to Michigan to work with a boxer; back in Chicago, he meets up with an old high school friend who teaches him how to make money stealing books; he follows his brother to the North Shore, where Simon is indeed engaged to a rich girl, hoping to glom onto this success by marrying her sister; he ends up in Mexico following another girl who has a dream of using an eagle to hunt lizards (which incites one of the best sequences in the play); he joins the aforementioned merchant marines.

Through all of this, Mulvey brings enough humanity into this human chameleon to keep us caring what happens to him. It’s an excellent performance, especially because Augie by his very nature tends to go along with whatever is happening with a bemused look that suggests he is just perfectly content ingesting life as it happens, no matter how it happens. It’s really only with his family that he shows real and deep emotions. His scenes with his disabled brother Georgie (Travis Turner) show a kind of tenderness he rarely displays otherwise, and his scenes with Simon, as their volatile relationship ebbs and flows, allow Mulvey to play a much more complex series of emotions. Outside of the family, though, he tries to hold a steady keel. Even his lover Thea (Chaon Cross in an even better performance than her last Court appearance in Photograph 51), is really a girl he follows to Mexico mostly because she says she loves him and he can’t think of anything better to do.

Newell’s direction is brilliant here: Auburn did him no favors by having actors, even in the middle of playing characters, break with what they are doing to regale Augie with some of Bellows’ philosophical wisdom, yet every time it happens it is clear and it works. The eagle scenes also asked for some adventures in directing, and Newell’s staging of them is a real highlight. Even Newell’s stage transitions happen so naturally that they simply seem a part of the ongoing action. Add to that the multitude of roles that the ensemble has to assume, and the director clearly had to work some magic to keep them all clear and distinct. And the performances he gets from members of the ensemble (especially Aurora Real de Asua as Augie’s platonic friend Mimi) are completely wonderful.

Though Bellows just lets Augie continue to drift through his life, Auburn’s adaptation—following the character arc he has been working from the start—allows him to grow from his experiences and learn to take control of his decisions, making the ending more satisfying and (yes) theatrical, and bringing real closure to the story. If Bellows’ original is indeed the “Great American Novel,” as Martin Amis called it, does that make Auburn’s adaptation the great American play? I wouldn’t go that far: there are far too many excellent contenders that would make that list first. But there is no doubt that The Adventures of Augie March is a play that will linger with its audience for a long time. It may not be perfect—it does take a while to warm up at the start and it asks a lot of its audience—but is nonetheless a stunning achievement.

The Adventures of Augie March is now playing at the Court Theatre, 5535 S. Ellis Ave, Chicago through June 9. Check the website for specific dates, times, and tickets. Find more information about current plays in our front page recs and at theatreinchicago.com.