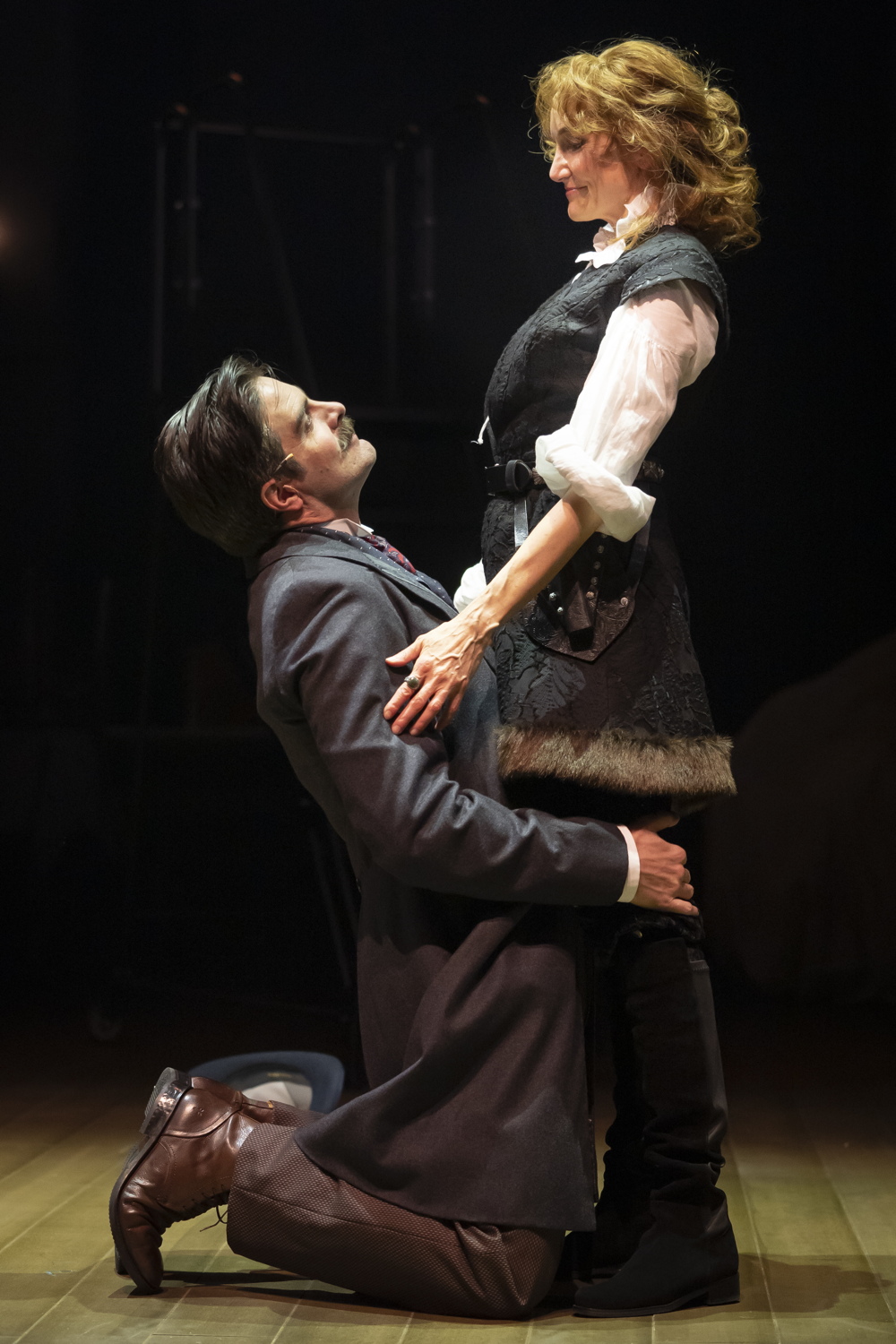 19th Century French actress Sarah Bernhardt was a powerful woman calling her own shots at a time when few women anywhere got to do so. As such, she is a perfect subject for a feminist play. Theresa Rebeck’s Bernhardt/Hamlet certainly has feminist leanings, but it is not at all political. It does not seek to change the world, though its tale of such a forceful and dynamic woman certainly seems timely in our modern, retrograde era. And this very funny and entertaining play, populated by many well-played characters and wonderfully directed by Canadian Donna Feore, certainly allows us to get to know its fascinating subject. Ultimately, though, it feels as if Rebeck didn’t quite believe that she had enough story to tell: her script takes a sharp second act turn that destabilizes its focus so much that (though it is never less than enjoyable) it ends up being more about a secondary character than the titular one.

Bernhardt, the most well-known actress of her time, reached the pinnacle of her profession: she could pretty much choose the parts she wished to play, and she even owned her own 1700-seat theatre in Paris. But in 1899, Bernhardt decided that she was not being challenged enough and determined to take on the greatest acting test in all of theatre: the melancholy Dane, Shakespeare’s Hamlet.

She was not the first woman ever to assay this most famous of all roles—it had been done 100 years earlier in England by Sarah Siddons—nor was this the first time she had taken on what were then referred to as “breeches roles” in which women played men onstage. But she was the only 19th Century woman with the chutzpah to try to play this role against all of the conventions of her era. She was adored by the public and critics alike, but this decision was still an enormous risk. Rebeck has Bernhardt acknowledge the difficulty of the part: “Actors play Hamlet all the time. Not all actors. Only the insane ones, you truly have to be mad as a hatter to take this on.” (In the end, her Hamlet was a huge success).

The first act of Bernhardt/Hamlet shows us the depth of her risk. We watch as Bernhardt, played with all of the requisite fire, passion, and arrogance by Terri McMahon, works through scene after scene of the Bard’s greatest play with her self-selected cast (including the always-great Larry Yando as popular French actor Constant Coquelin). It is a joy, especially for a theatre nerd like me, to be present as she delves deeply into the complicated text (“‘Unpregnant’? Now you’re just making up words”), questioning whether Shakespeare might have been a bit too infatuated with his brilliant poetry while crafting what she feels is a decidedly unpoetic character. Of the “To be or not to be” speech, she says: “All I’m saying is it’s a bit formal and well argued. If you’re thinking of killing yourself a little more desperation might be in order. It can begin as a well-reasoned argument but doesn’t utter terror have a place?” Shakespeare’s “gift for poetry,” she feels, “at times overwhelms the power of his playwriting.”

All of this struggle makes for a compelling and delightful opening act, even if you are not a theatre nerd, but it is not the play’s entire focus. Rebeck spends a lot of time fixating on an entirely invented affair with Edmond Rostand (John Tufts in a strong and varied portrayal), the French playwright of Cyrano de Bergerac who wrote several roles expressly for Bernhardt. [There is also a minor symbolic subplot involving the Czech artist Alphonse Mucha (played by Gregory Linington) who created posters for her show.] Though Bernhardt was well-known to have had many affairs during her life, often with quite famous people, Rostand was not one of them, and unfortunately this subplot ends up derailing the play.

This occurs because Rebeck has Bernhardt request that Rostand re-write Hamlet in French and in prose, eliminating the excess of poetry that was getting in her way. (In fact, Berhardt did use such a translation, but it was written by two other playwrights.) The result is that her Rostand is side-tracked from working on Cyrano. His deep frustration fuels too much of Act Two, though it does impel an appearance by Rostand’s wife Rosamond, creating a powerful if brief turn for Jennifer Latimore. The rest of Act Two focuses so much on that play that it might have been called Rostand/Cyrano and, though it remains engaging right through the last minute, the play doesn’t say as much about Bernhardt’s ultimate portrayal of Hamlet as it does about her early preparations for the role.

It’s still easy to recommend this play because, no matter what its focus, it is an absorbing, captivating piece of theatre. Director Beore’s love for the material shines through every decision she makes, and even her minor characters are thoughtfully rounded. Narelle Sissons’ flexible backstage setting allows for quick and often lovely scene changes, and Dana Osborne’s costumes evoke the era beautifully. There are also some absolutely lovely moments in Robert Wierzel’s lighting, and Joanna Lynne Staub’s sound design and original music are nothing short of perfection. Despite the issues I have with the second act, this is one impressive play both in front of and behind the scenes. I wish, though, that it had remained more true to its focus.

Bernhardt/Hamlet is now playing at the Goodman Theatre, 170 N. Dearborn St, Chicago through Oct 20. Check the website for specific dates, times, and tickets. Find more information about current plays in our front page recs and at theatreinchicago.com.