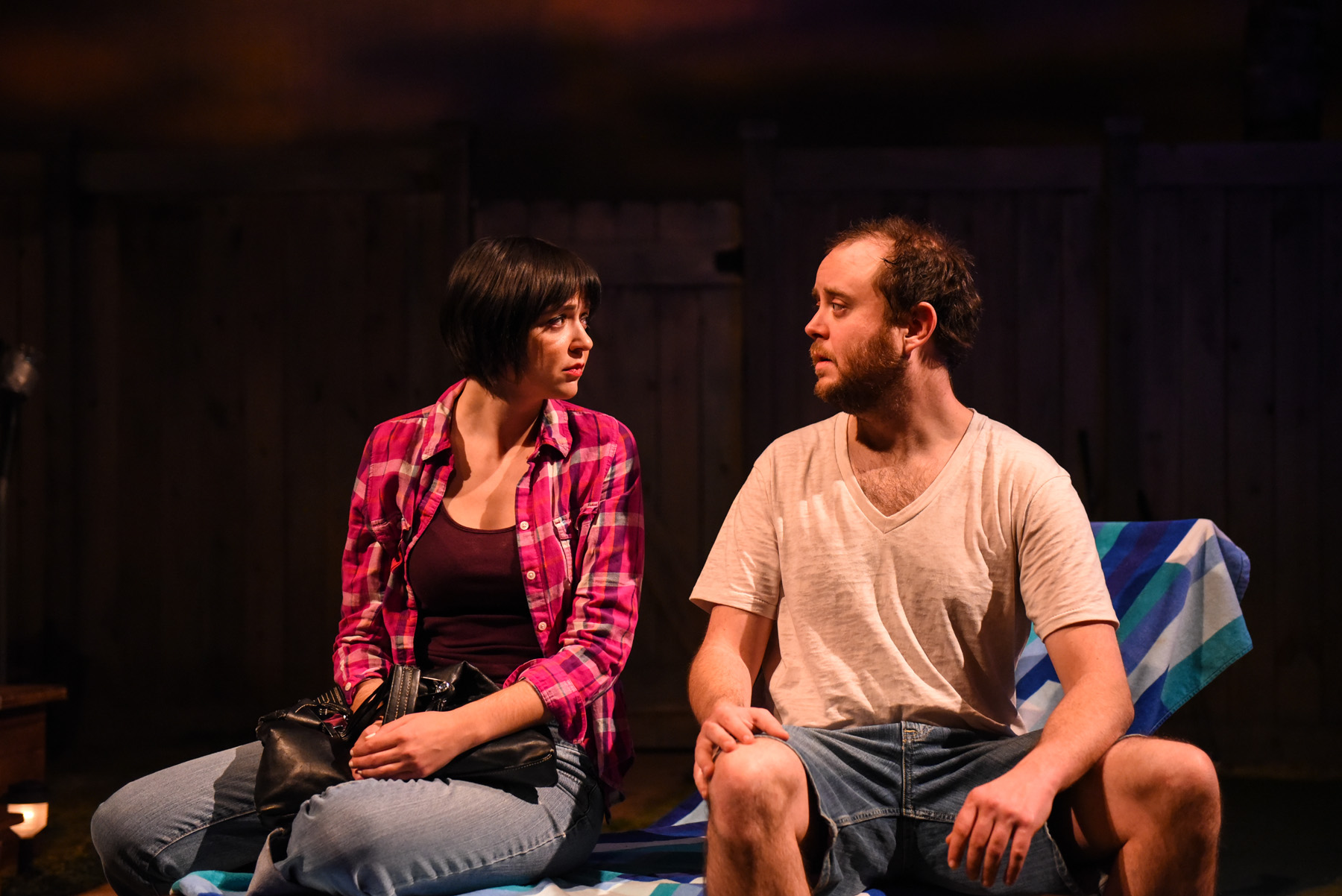 “Flamingo and Decatur,” a new play by Todd Taylor that Fayetteville, Arkansas’ Block St. Theatre is world premiering at Chicago’s Theatre Wit, immerses the theatre-goer in a world of professional gamblers in Las Vegas. Taylor, who also produces, brought the play to Chicago in order to take advantage of the great store-front opportunities here and to open what he calls a “two-way pipeline between Fayetteville and Chicago.” The great news is that his move has paid off in spades.

The play focuses on a couple of gamblers who are trying to ride out the recession of 2008. Jackson (Jason Shipman), a sports better currently riding a losing streak, is hoping for a significant payoff from a proposition bet he’s made with another gambler about who can go the longest without eating meat or drinking. Ben (Drew Johnson), his roommate, is an online poker player whose nearly $15,000 in assets have just been frozen (along with everyone else’s) by the Justice Department. 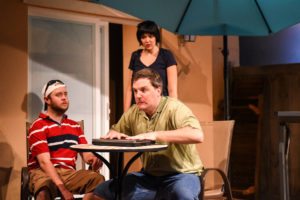 Together, they hit upon the notion of squatting in an abandoned house foreclosed as a result of the recession as an easy way to save some money and, as Jackson says, “stick it to the man.” This plan seems to be a good one until a nosy neighbor (Simon, played by Nathaniel Stahlke) becomes involved and, upon discovering the truth, threatens to go to the police unless they pay him $500 each month. This is the basic dynamic of the play, and maybe the dynamic of Las Vegas as well: everyone is trying to hustle everyone else. Even the two friends/roommates can only count on each other so far.

To this hot mess Taylor adds professional poker player Nicole ( Stephanie Bignault), whom the roommates take in (without telling her of the squatting, of course) to cover this new debt. Nicole may be a professional gambler, but she is honest and sincere: poker playing to her is an eight-hour-a-day job, not a lifestyle. As we get to know more about these characters, we are struck by this contrast, especially with the main character, Jackson.

Jackson sees the world of Vegas as divided into two types of people: “tree frogs” (those who are too timid to place large bets and thus are never able to get ahead in any gambling scenario) and “pumas,” who “pounce” on an opportunity when they see it. His greatest achievement was realizing before anyone else in Vegas that the Boston Celtics’ acquisitions of Kevin Garnett and Ray Allen would instantly make then NBA favorites and getting down $5000 in bets at 10-1 before the odds changed to 3-1. Of course, being a “puma,” he immediately pounced on the next opportunity and lost the entire amount.

Nicole, on the other hand, sees Vegas differently. To her, Jackson belongs to the losers, the gamblers who are always betting against the house instead of other gamblers and, as everyone knows, the house always wins. He’s a nice enough guy, but she’ll take action against him on the prop bet, thank you.

Taylor, who spent time in Las Vegas as a sports writer and poker professional, has written a brilliant script. In the same way that “Star Trek” or other science fiction programs use technospeak to create verisimilitude, Taylor uses conversations infused with gamblers’ vernacular to heighten the reality of the people we are watching. You don’t always know exactly what they mean, but you get the gist, and I doubt there was anyone in the audience who left feeling confused. The result is a much more honest portrayal of the gamblers’ world than we are used to seeing, with all of the negatives left intact. 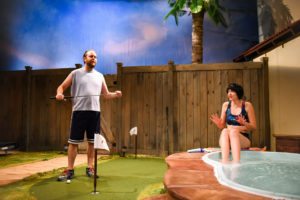 Shipman is outstanding as a man who is in complete denial about his state of existence. He’s the guy who makes small bets so he can get the nut for one more large bet, a score that he dreams will get back that $50K he lost. Maybe if I had it back…he dreams, he’d act differently, but you know that, if he did, he’d simply turn it around and bet the whole thing on another losing prop bet. Deep inside, he probably knows this too, which may be why Jackson can’t lie to Nicole for very long in the play, especially after he starts falling for her. Bignault, too, turns in a brilliant performance: a scene in which she explains a “bad beat” that happened to her at a game that night (a truly awful and emotional betting loss precipitated by rotten luck) takes us right into the middle of the moment despite the vernacular. Nicole is also the character with the widest emotional swings, and Bignault handles all of that range with aplomb. Ben is at times a comic relief role, almost always a foil to his roommate, and Johnson is a perfect actor for the role: physically unlike Shipman, he comes across as the “clean” one, the bettor who plays by the rules, probably the “tree frog” to Jackson’s “puma.” That Ben has $15K, even if it is currently untouchable, to Jackson’s nada, says volumes about them. That Ben is willing to take a real world job to pay the bills while Jackson lazily focuses on his prop bet tells us even more. Stalhke’s Simon is the one character in whom we can detect any real change, but even in him the change is rather pathetic and comes as a result of our learning more about his past. The actor is excellent both at the “nasty neighbor” version of the character and at the later “lost soul” version, making both come across as real and—for those who are paying close attention—telegraphing the latter in the former.

Joe Schermoly’s set design here is absolutely fabulous. We are in the back yard of an upper middle class Vegas home complete with putting green and hot tub. The set’s verisimilitude matches that of the script, and I’m sure Schermoly and Taylor had conversations about that. Original music by Christopher Kriz is also excellent between scenes, as is his sound design in general and the lighting by Alexander Ridgers that effortlessly takes us back and forth between daylight and nighttime scenes. And Chloe Patten’s costumes—love Ben’s suit and everything worn by Simon—once again add to the reality of the scene. Kevin Christopher Fox directed this show, bringing together an out of state group under unusual circumstances and pulling out these dynamite performances, along with some outstanding staging. (One scene between Nicole and Jackson has so many great stage pictures in it I couldn’t believe it was a two person scene in a backyard set.)

Taylor’s title, Flamingo and Decatur, refers to an intersection at which another gambler abandons a difficult prop bet because he has won a much bigger one and doesn’t need the score anymore. During the play we see our four players faced with problems stemming from their gambling. Whether each of them would make a similar decision becomes a question looming large over the story. As Nicole notes at one point, it is in the puma’s nature to hunt alone. Whether Jackson can really change his stripes (mixed big cat metaphor there) will determine his future. Whether any habitual gambler can might be part of the message of this truly outstanding play. The acting, scenic design, and direction come together to present the world of the gambler as only a writer intimately acquainted with it could show us. Flamingo and Decatur should be on your January “must see” list.

Flamingo and Decatur is now playing at Theatre Wit, 1229 W. Belmont in Chicago, until February 18. W-Sat 8 PM; Sundays vary. Tickets are $22-32 and are available from Theatre Wit. No half-price tickets are available. Find more information about current plays on our Current Shows page and at theatreinchicago.com.