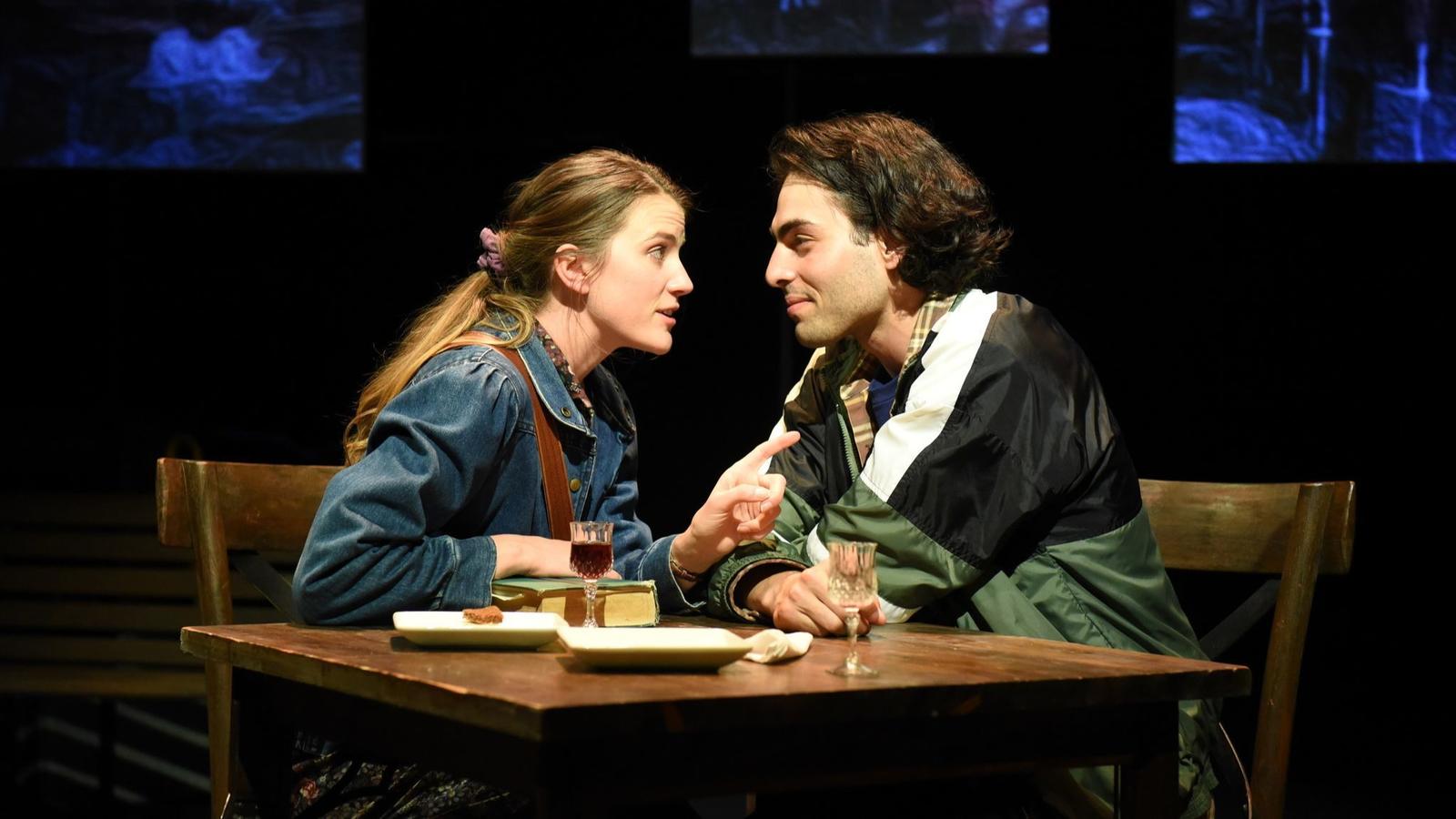 Bloomsday is the name given to June 16, when many Dubliners dress in early 20th Century clothing and celebrate the legacy of James Joyce, who created the memorable character of Leopold Bloom in Ulysses, a book that takes place on that one single day. Bloomsday is also the name of a play by Steven Dietz that Remy Bumppo Theatre is now putting on at Theater Wit. Although Bloomsday’s title, its Dublin settings, and its soul are from Joyce, there is no need to have read his magnum opus in order to enjoy it. (Full disclosure: I have.) All you need to bring with you is an open mind, a sense of Irish magic, and a human heart, and you can’t help falling in love with this play.

Scenic designer Jack Magaw and director J.R. Sullivan have opted for a clean, lean structure for this production, which allows Dietz’s wonderful characters and fascinatingly playful structure to assume the forefront. The play is something like a dream. It’s the story of two people who met on one fateful day 35 years ago and then have not crossed paths since until the man, Robert (Shawn Douglas) decides to seek out the girl he has never been able to get out of his mind, Caithleen (now known as Cait and played by Annabel Armour). Discovering her whereabouts in Dublin, he writes to her, and they decide to meet. We watch that meeting intertwined with the story of their only previous day together, but it is not that alone that makes Bloomsday stand out. On that first day, Caithleen had told young Robbie that, like her mother who went mad, she sees past, present and future all at once, a “chord” instead of a sequence of notes. That chord forms the core of the play, in which the now middle-aged couple interact with and observe their younger selves (Jack DeCesare and Bryce Gangel) as time periods blend together like Caithleen’s chord.

Dietz has said that the play is “the story of a man who tries to go to a city but instead he goes to a time,” and Robert’s journey back to Dublin begins with the vision of young Caithleen as she invites him to go along on her “Joyce’s Dublin” tour of the spots that Leopold Bloom visits in the book. (This is a real thing; it’s one of several literary tours you can take in Dublin.) As he was when he was young, the older Robert is infatuated with the girl, demanding that the audience just stop and look at her for a moment and really see her. On that tour, Robbie certainly saw her, taking well over a hundred pictures of the girl and none of the Dublin he was wandering through. He was in love at first sight, and wanted nothing more than to take this unusual beauty back to America with him but, as we come to learn, he can’t seal the deal. (His older self berates him for being an “idiot.”)

The four actors playing these two characters are uniformly excellent. Gangel and DeCesare have excellent chemistry together; it’s easy to see that, in a better world, they’d be meant for each other. Gangel’s youthful, enthusiastic approach for the subject of the tour is infectious, and DeCesare, whose character knows nothing of Ulysses, only has eyes for her. Still, they don’t manage to connect, and now, so many decades later, Robert is trying once again to make it happen. Douglas makes a strong story-teller and a sympathetic character, surrounded as Robert is by the might-have-been. She has been so under his skin that he has spent his life teaching Ulysses to college sophomores who don’t get it at all—Robert himself says it is mostly crap—and each time he explores Bloom’s one day in Dublin he thinks of his own. Armour, less serious and less stressed out by the turns Cait’s life has taken, gives the older woman, who still experiences time as a chord, a kind of inner peace that Robert has yet to find.

There are, of course, many allusions to the novel, but they are carefully explained. Caithleen especially focuses on the parts of the story involving Bloom’s wife, Molly, as she experiences a powerful sexual encounter while her husband wanders the city. To her, Molly is the real “hero” of the novel, and her explosive “Yes…oh yes” at its end is the desire that both Robert and Cait wish could have been. Cait, ironically the more realistic one despite (or perhaps because of) the fact that she exists out of time, suffering from her mother’s malady, is more sanguine about their relationship and the future than Robert is. She doesn’t chide her young self for her mistakes; instead, she speaks to her calmly about the life she will live, both the good and the not so good, and Caithleen absorbs it all. Women, Cait tells us, can imagine their futures better than men can; how much easier must it be when you can see all moments at once. How much sweeter and deeper the enjoyment when, instead of time as a sequence you can’t control or revisit, it plays as a harmonious chord that encompasses a lifetime?

Bloomsday is a kind of a love story. It celebrates a could-have-been love between two people and a tender connection to a complex piece of poetic Irish prose, as well as an embrace of Ireland and an Irish way of thinking. It’s a beautiful play that Remy Bumppo produces with sensitivity, empathy and a little touch of magic. And it’s one of the finest plays so far this year.

Bloomsday is a Remy Bumppo production now playing at the Theater Wit, 1229 W. Belmont, Chicago through June 22. Check the website for specific dates, times, and tickets. Find more information about current plays in our front page recs and at theatreinchicago.com.