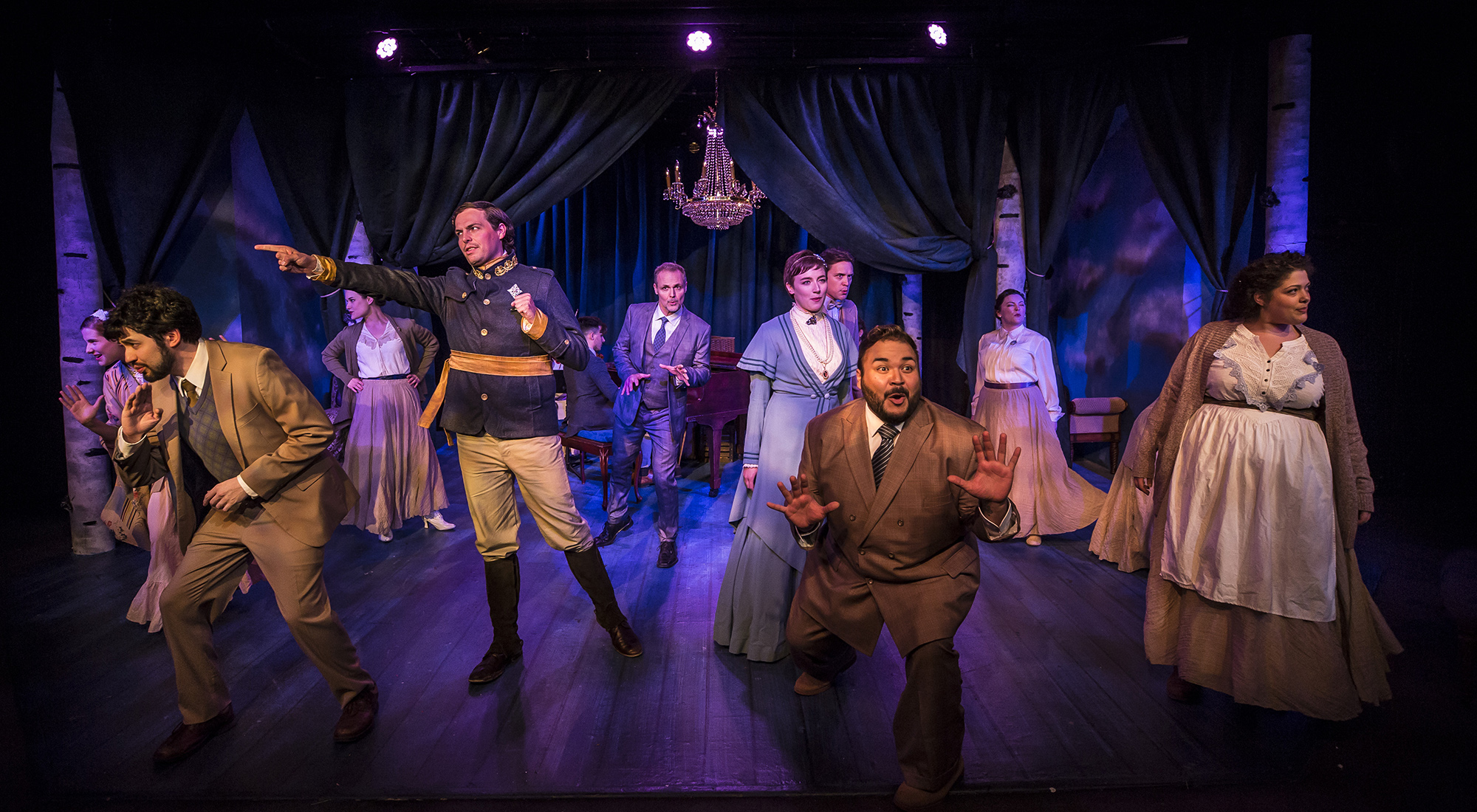 Like most theatre people, I have a huge passion for the shows of Stephen Sondheim. (No pun intended, Sondheim-philes out there enjoying holiday company. OK, I intended that one, and I’ll stop now.) Whether it is Sweeney Todd, Into the Woods, Assassins, or whatever, I try not to miss one of his musicals if it is at all possible. Done well, they are among the best that the theatre world has to offer. And Boho Theatre Company, with its excellent new production of one of Sondheim’s masterworks, A Little Night Music, certainly does it right.

A Little Night Music, a beautifully crafted musical comedy with a book by Hugh Wheeler, is one of the playwright’s finest tributes to love in its many forms. It takes place in early 20th Century Scandinavia during one of those high-latitude summers when the sun simply never sets, leaving plenty of time each day for…whatever might happen. And plenty happens in the endless day that comprises the play’s second act that changes almost all of the relationships that the first act sets up. A philandering husband rediscovers his wife, unrequited love is requited, and a couple who seemed to have missed their chance gets a second one. 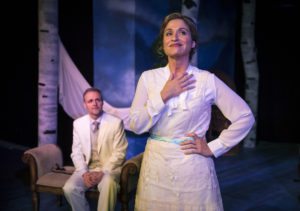 The most significant of these relationships belongs to Fredrik Egerman (Peter Robel) and Desiree Armfeldt (Kelli Harrington). Fredrik has recently become married to Anne (Rachel Guth), who is much younger than he. (In fact, his son Henrik (Jordan Dell Harris), an overly pious person, is in love with her.) Anne has a problem: in eleven months of marriage, she still has not been able to bring herself to sleep with Fredrick. This has driven him into the accommodating arms of Desiree, an actress who once was his lover. Desiree, meanwhile, has been carrying on an affair with a married man, Count Carl-Magnus (Christopher Davis), a proud, pretentious, highly jealous man of dubious intelligence, who takes his wife Charlotte (Stephanie Stockstill) for granted. All of these intertwining pieces come together at the chateau that Desiree’s mother (Marguerite Mariama) and daughter Fredrika (Isabelle Roberts) call home when they all show up for a “Weekend in the Country” along with Anne’s maid, Petra (Teressa LaGamba). (The company’s rendition of this song, like their work throughout the evening, is wonderful.)

Robel is a strong choice for Fredrik, as he captures both the middle-aged infatuation with youth (“You Must Meet My Wife”) and the confusion that it causes (“It Would Have Been Wonderful”) with equal aplomb. He also handles some of Sondheim’s best rhymes and tricky patter rhythms beautifully, as he shows us in his opening number, “Now” (part of an opening triptych with “Later” and “Soon”):

Now, as the sweet imbecilities tumble so lavishly onto her lap… Now, there are two possibilities: A, I could ravish her; B, I could nap.

As for Harrington, she embodies Desiree, whose exhausting schedule with her touring company has long prevented her from developing any lasting relationships (even her daughter lives with her mother). Unlike some other Desirees I’ve seen, Harrington really punches the frustrations of her difficult life while allowing her character to maintain the happy appearance she displays to the world. Harrington’s “Send In the Clowns,” the show’s signature number, is heartbreaking in its world-weariness. 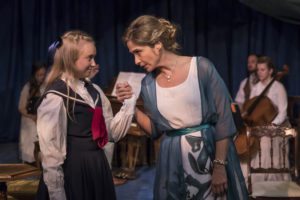 Robel and Harrington, though, are merely at the front of a group of performers that shines throughout the evening. Not only the various lovers, but the five-person chorus as well (Nicole Besa, Rachel Klippel, Emily Goldberg, Lazaro Estrada, and Ross Matsuda) sing some of Sondheim’s most beautiful songs with subtlety and nuance, thanks to music director Tom Vendafreddo. The chorus especially shines in “Night Waltz” and “The Sun Won’t Set,” and Goldberg and Besa have some of the most expressive moments in the show. 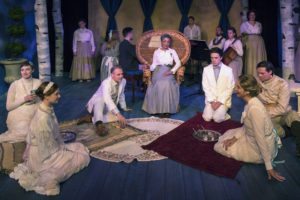 Guth’s energy and upbeat attitude is a perfect contrast and complement to Harris’s moody, angry Henrik. Like the cello that he plays, (and director Linda Fortunato handles that in a clever way), Henrik can be very expressive and deeply disturbing, and his emotional instability challenges any actor playing the role. Harris handles Henrik beautifully. And Guth’s Anne is all youthful enthusiasm and insecurity. Both actors also have lovely voices; in fact there isn’t a dissonant note in the whole ensemble. Davis (having great fun playing the buffoon) and Stockwell too are brilliant in their own numbers, and Stockwell’s “Every Day a Little Death” is, in its way, as powerful and compelling as “Send In the Clowns.” Madame Armfeldt’s “Liaisons,” too, is an homage to the past tinged with regret, and Mariama is perfect as the regal matriarch reminiscing. Finally, Petra, the production’s embodiment of pure bisexual passion, has a glorious opportunity to shine in “The Miller’s Song,” and La Gamba nails it.

I had my doubts about how this show could fit on the small Greenhouse Theatre Center stage, but it works effectively thanks to a simple, versatile Evan Frank set that the chorus alters theatrically several times during the show. Fortunato delivers an A Little Night Music that compares well to versions done by much larger theatres and companies, and there is even something about the more intimate production that helps the characters to come more alive. The onstage musicians (Vendafreddo, Mike Matlock, Sarah Kim and Magdalena Sustere) work magnificently together and not only handle the score outstandingly but allow Fortunato a way to vary her stage pictures on a small stage. She uses them in many ways, from creating an unobtrusive upstage crossing path for the actors to allowing Sustere to stand-in for Henrik’s cello.

Boho’s A Little Night Music is a stellar show. I went in hoping it would be and I wasn’t disappointed in any way. It’s one of Sondheim’s finest works, and this company delivers with one of the best ensemble performances I’ve seen this year. Don’t miss it.