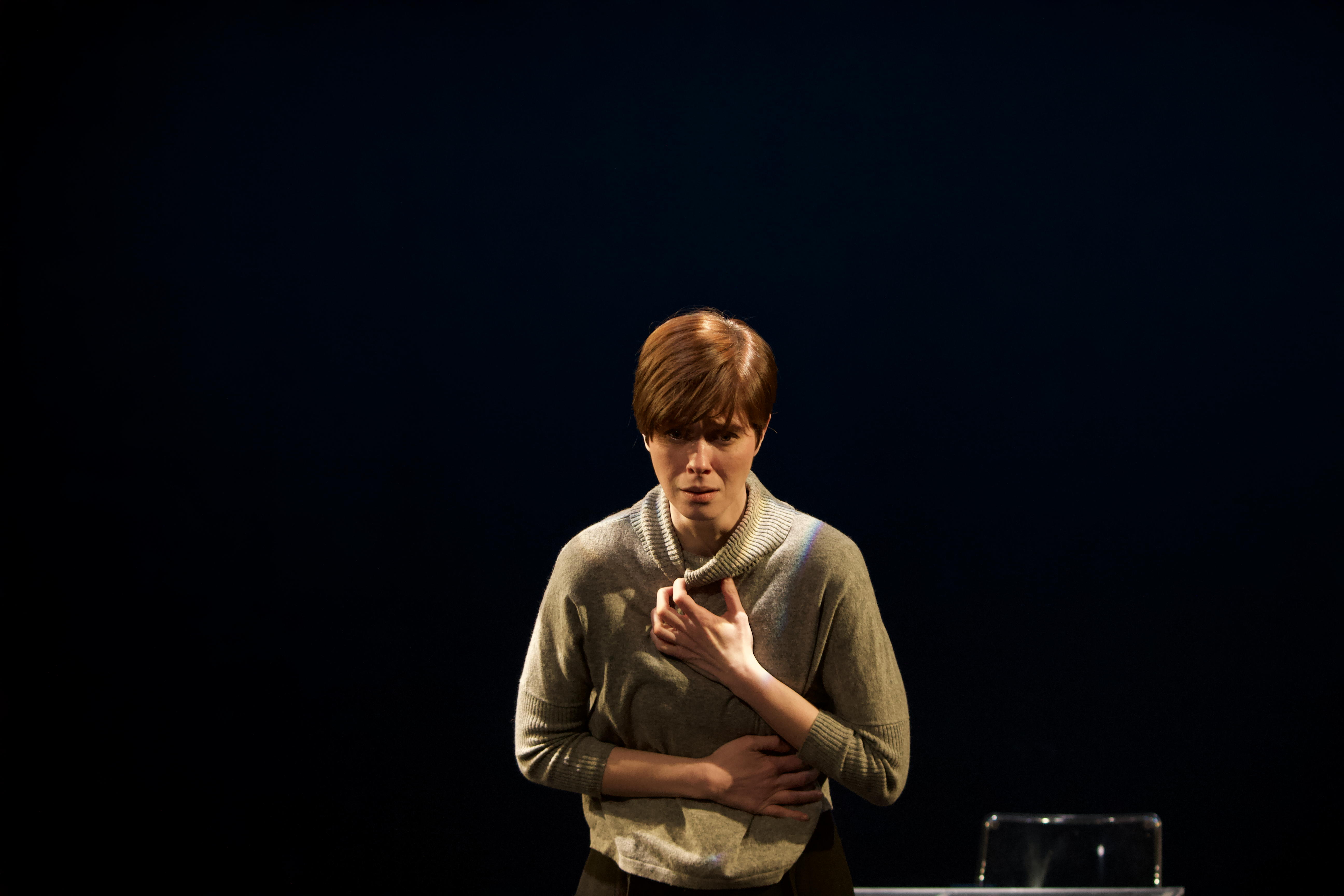 A young man meets a young woman on a blind date. Though it is clear that they share little in common and that she is not that into him, he manages to get her to commit for a second date. Now if this were a Hollywood film, there would be some complication that causes her to say she’s not interested, but he’d ignore that and set out to win her. He’d send her flowers. He’d make a grand gesture. And in the end, despite everything, he would get the girl.

But that’s Hollywood. Rebecca Gilman’s play Boy Gets Girl, now playing at the Edge Off Broadway in a Saltbox Theatre Collective production, is anything but a cute romantic comedy. No, this plays much more like how such tributes and attention would probably be viewed in real life: as stalking. No New Year’s Eve kisses, no falling in love, just a bothered (or frightened) woman and maybe a restraining order. And as the boy in this scenario becomes more and more obsessed, things spiral completely out of control in an intense and scary manner. Flowers become threatening letters. Phone calls come at all hours of the night. She doesn’t feel safe even in her own house.

Boy Meets Girl is a look into the disturbing world of stalking, and it doesn’t pull any punches. Director Brian Fruits uses only a few tables and chairs as his set, which keeps the attention firmly where it belongs: on what this is doing to the victim. Magazine writer Theresa (Katie Zisson) isn’t really interested in her blind date with Tony (Ryan Smetana), but she distrusts her own motivation enough to agree to a second meeting. It’s there that Tony’s true nature begins to manifest. Though she tells him in no uncertain terms that she is not interested, he keeps pushing her until she nearly blows up completely. It’s a sign of what is to come.

Smetana gives Tony a character that could best be labeled “desperate.” He needs a friend; he wants a lover. But his overreaching is quickly clear and, after he appears in Theresa’s office, she starts to fear what has been unleashed. As the focus shifts to Theresa alone, Zisson’s increasing intensity is the outward sign of a woman who herself is becoming desperate. She tries to talk it over with her boss Howard (Jason James Thompson) and a colleague, Mercer (Brian Bengtson), but there isn’t much they can do about it, so she finally turns to the police (a very sympathetic turn by Tomica S. Jenkins). Though she gets her restraining order, even the detective tells her it doesn’t mean much because they can do nothing unless he violates it, which he will most likely do. And then…

“What’s the worst that you’ve ever seen happen?” Theresa asks the detective.

The answer, pointed and forceful, is “You don’t want to know.”

The issue of how society objectifies women is played out by an interview Theresa has with a movie director (Scott Jones) who freely acknowledges that he chooses his actresses by boob size. An unabashed fan of “voluminous breasts,” he makes exploitative films that not only highlight mammary glands, but also manage to make the women seem the aggressors, potentially adding fuel to the arrested adolescent fire of men like Tony, who perceive themselves as wronged by the women in their lives. Gilman’s script, though, continuously opts to forego the easy answer: the director, we come to understand, is actually a pretty decent guy, at least for a self-proclaimed “jerk.” Mercer and Howard pick up this thread as well, discussing the ways men view women and blatantly objectifying Harriet, the secretary (Alexandria Rust). Gilman again chooses not to make conclusions easy by making sure that both we and Theresa know that these are good men, no matter their private indiscretions.

Fruits ups the ante on the stalking by employing closed-circuit cameras. We see displayed on the wall, in real time, various views of the set and even the audience: a secret spy in their midst. It’s an unnerving device designed both to make the stalking even creepier and to place us somewhat into the action.

Boy Gets Girl turns the familiar Hollywood formula upside down, and we are left to join with Theresa in her harrowing nightmare. It’s extremely disquieting, but also sadly real in a way those Hollywood endings are not, because we know that this time, if boy “gets” girl, it probably won’t be a joyous moonlight meeting. We’ve been conditioned by cheesy romantic comedies to expect the boy to fight his way to the girl despite her objections, for that way lies the happy ending. But real life isn’t about happy endings, and this play isn’t either. It’s full of excellent performances, strong direction, and taut writing, but in the name of the demon on the other shoulder. And it shows that even the most innocuous beginning can degenerate into darkness. It’s a harsh reality, but this powerful play brings it home.

Boy Gets Girl is a Saltbox Theatre Collective production now playing at The Edge Off Broadway, 1133 W Catalpa, Chicago until Jan 27. Check the website for specific dates, times, and tickets. Find more information about current plays in our front page recs and at theatreinchicago.com.