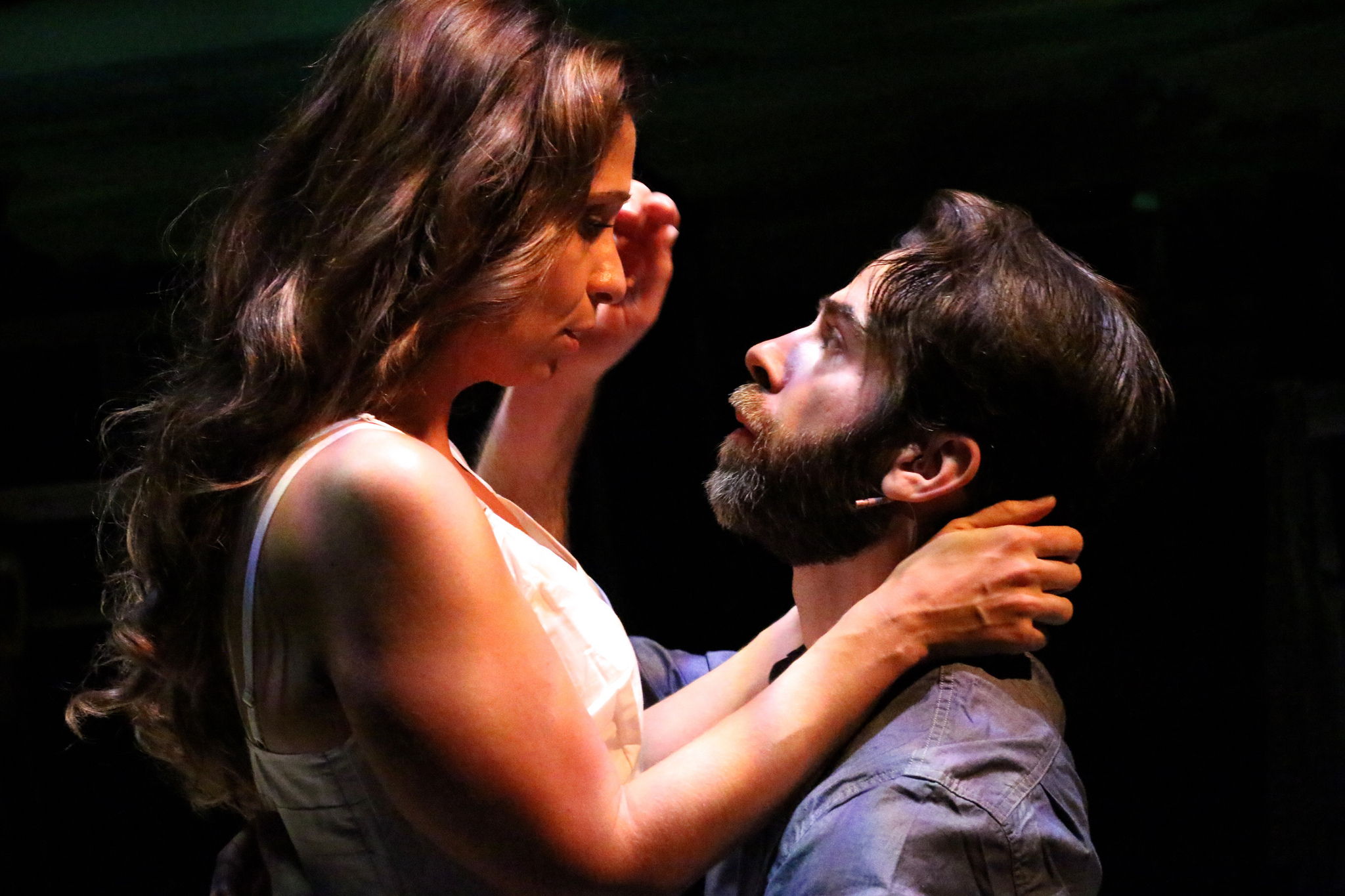 What do we do when true love comes too late? This is the question that is faced by Francesca (Kelli Harrington) and Robert (Tommy Thurston) in Theo Ubique’s beautiful new production of Marsha Norman and Jason Robert Brown’s The Bridges of Madison County. Based on the Robert James Waller book of the same name, Bridges explores four days in the life of a lonely Italian immigrant/Iowa housewife and what happens when her soulmate literally comes to her door. Can she resist the temptation? (No.) But can she uproot herself from the life she has known for eighteen years?

Robert is a photographer from National Geographic who has been tasked with shooting the famed covered bridges in this Iowa county. A bit lost, he stops at a small farmhouse for directions and finds Francesca, who is getting ready to enjoy a few days to herself while her husband and children are taking their prize steer to the national competition in Indiana. The attraction the two feel is nearly instant, and they find themselves quickly and, against all odds, falling in love.

Any production of this lovely and personal musical is going to be heavily dependent on the chemistry between its main characters, and Theo Ubique is lucky to have Harrington and Thurston, two extremely likable actors (and very strong singers) who propel their characters’ accidental meeting into something much more. From the start, you can sense the tension between them, and as they give into it you can’t fault either one. Francesca is a war bride who has been living an unfulfilling life. She loves her husband and children, but has a hole in her heart the size of her home city of Naples, which she misses. Robert, a globe-trotting photographer who has just visited Naples, offers her a chance to escape into a more exciting life. And as the sparks slowly begin to fly between them, their brief affair blossoms into something that changes them both forever.

Director Fred Anzevino oversees a tight production on a rustic set designed by Colt Frank and lit beautifully by James Kolditz. Anzevino gets excellent performances not only from his leads but also from the rest of his cast, which includes Molly LeCaptain as Robert’s ex-wife, who sings the lovely “Another Life,” and Carl Herzog as Bud Johnson, Francesca’s husband. Herzog is as likable as Thurston, and though Bud is prone to temper connected to his tense relationship with his son, Herzog makes it clear that he is very much in love with his wife in a song called “Something From a Dream.” Musical director Jeremy Ramey leads a strong five-piece orchestra through Brown’s Tony-winning score with its mixture of country, pop, and operatic flourishes in songs like Francesca’s opening “To Build a Home,” Bud’s “You’re Never Alone” and Robert and Francesca’s “Wondering” and “Before and After You/One Second and a Million Miles,” as well as the bluegrass-flavored “State Road 21/The Real World,” sung by the company along with Peyton Shaffer and Christopher Ratliff as the Johnson children. Kate Harris and Randolph Johnson play Bud and Francesca’s neighbors, and Johnson and Herzog have a powerful duet together, “When I’m Gone.” The musical is full of beautiful and memorable music, and the actors, especially Harrington and Thurston, bring it home.

But the real center of the musical is the question of whether Francesca will ultimately leave Iowa to be with the man she knows is the love of her life. The passionate power of their affair leaves her confused and desperate to continue to know the joys of real love, but she is also keenly aware of the nature of commitment to the home and family she has built. From the outset, it’s clear that there can be no purely happy ending to this love story; Francesca may leave or stay, but something in her will die either way. The whirlwind of the romance shows her that both sexual and romantic ardor can still exist for her, and that her relationship with Bud doesn’t satisfy her, but he’s a good man and she does love him and the children.

This musical was not really a success on Broadway, but I honestly think it works better in the compact Theo Ubique space, where this small show can be as intensely personal as it is meant to be. The emotional fervor of the affair can get lost in larger theatres, and here it seems to blossom. It’s a much better fit than last fall’s The Full Monty was in the same space, though that show worked pretty well anyway. As Theo Ubique continues to play with its new facility, though, it is learning how best to use it. This summer’s Hedwig and the Angry Inch should be a wonderful challenge, and I’m looking forward to seeing what they do with it. But for they seem to have found a perfect show to showcase both their theatre’s size and its flexibility, not to mention Harrington’s amazing voice. The Bridges of Madison County is an intimate production that feels right at home here, and Theo Ubique looks to have yet another hit on their hands.

The Bridges of Madison now playing at Theo Ubique, 721 Howard Evanston, until Apr 21. Check the website for specific dates, times, and tickets. Find more information about current plays in our front page recs and attheatreinchicago.com.