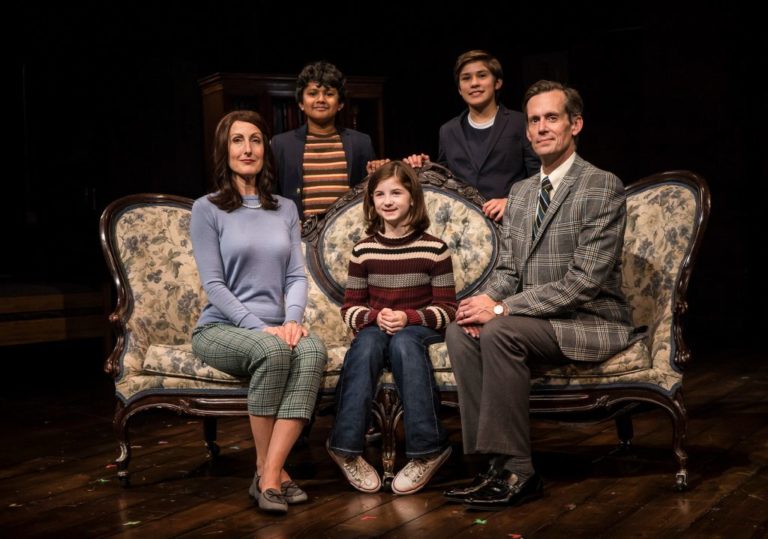 There is nothing really “fun” about the home portrayed in the musical version of Alison Bechdel’s graphic novel memoir. The “fun” derives from the Bechdel children’s playful realization that it is the first three letters of the most significant word in Bechdel Funeral Home. From that simple piece of information Bechdel (and musical book writer Lisa Kron, sticking for the most part to the path of the novel) bleeds the first of many, many painful ironies uncovered in this powerful piece of theatre.

Bechdel’s memoir centers on her secretly gay father’s death (from suicide? she is never certain) at the age of 43 after losing his teaching job in a scandal involving a young boy. It is also about how she, now that age herself, has never reconciled her loss of a father who, all of her young life, was distant, cold, and even violent. And the fact that she came out to him as gay only a month before his death has also weighed on her: did her announcement somehow cause his death?

This is a play that cannot work without strong acting at the core, for Kron’s book shows us three “Alisons” simultaneously. In addition to the 43-year-old version, played by Danni Smith in an emotionally charged performance of a complex role written to reflect deeply-seated conflicts within the author, there are two younger versions. College freshman Alison is performed here by Hannah Starr, playing the newly out lesbian with the newly revealed parental secret as a post-teen roller coaster younger version a completely open book. In addition, the amazingly talented Stella Rose Hoyt (sharing the role with Sage Elliot Harper) plays “Small Alison,” a version of Bechdel who probably ranges in age from around seven to ten in the years we see her in the play. Despite being “small,” Hoyt delivers a performance easily equal to the others and at times steals the stage for herself so completely that you feel lost in her preternaturally expressive face.

The parental roles in this play, perhaps less completely understood by Bechdel herself, are not as fully revealed. As Alison’s mother, the put-upon wife of a closeted gay man obsessed with home redecorating and having affairs with students who realizes the truth that they are living as if “chaos never happens if it’s never seen,” McKinley Carter carefully does what her character does: she essentially becomes part of the furniture for the majority of the time, a piece of her husband’s life that is easy to discard, eventually losing herself to alcohol. Her intense, understated performance seems almost always on the edge of a breakdown, and the power of what she is feeling comes out in her signature song, “Days and Days,” in which for the first time she voices all of her anger and frustration over her life:

It can be argued that “Fun Home” as a musical is a set-up for confessional songs like this by all five of its main characters. Alison’s father is played by Rob Lindley a bit too desperately. His character is not warm, but he ought to show some sign of inherent warmth if he is successful at all in his three careers. How can one be a teacher, a funeral home director, and show expensive homes if one lacks any personality or hides it all the time? But Lindley pretty much keeps it under wraps, the warmth not ever surfacing, even while he is showing the home or trying to seduce a young man in his living room: rather than seductive or (better) clumsy, he comes off as a bit creepy. It’s a wonder the young man (Joe Lino, playing several roles) sticks around. But if Lindley struggles a bit to show a man who cannot allow himself joy or connection, he excels when it comes to his own confessional song, “Edges of the World.” Likening himself to the dilapidated farm he’s trying to rehab, all he sees are

So much damage, Broken windows, Pipes are shit, Crap veneer.

And though there are times “when the sunlight hits the parlor wall” that he can actually still see “so damn clear” what he tries to tell himself several times throughout the play (that he still has got what it takes), the anguish Lindley portrays is real, and it justifies the power of the song’s final moment.

All of the Allisons get their confessionals as well. Small Alison, who has struggled to get her father to see her as she wishes to be seen all of her life or even pay much attention to her, sees a butch dyke in a diner and sings an ode to the woman’s

swagger and your bearing/ and the just right clothes you’re wearing/ your short hair and your dungarees/and your lace up boots… and your keys, oh, your ring of keys.

In this epiphany that Bechdel in her novel says happened when she was only five, the physical accoutrements of the lesbianism she won’t even allow herself to admit for a dozen more years strike her deeply. Hoyt, standing front and center, goes through about twenty different emotions during the song before arriving at the epiphany of “I know you,” and we can see every single one of them in her eyes and on her face. It’s as strong a bit of acting as you’ll want to see, and Hoyt is only in 5th grade.

As to Starr, her confessional is the most lovely, uplifting, fun one, as it comes when she has just discovered her sexuality. Starr makes the most of “Changing My Major,” drawing the audience in with the sheer unremitting joy of her performance. She sings such silly lines as

I am writing a thesis on Joan. It’s a cutting edge field, and my mind is blown. I would gladly stay up every night/ and hone my compulsory skills with Joan.

with so much pleasure that they sound completely reasonable.

The contrast between her powerfully positive epiphany and later Alison’s is stark and devastating. Smith, who has the thankless task for a great deal of the play of standing in the background and watching as Alison’s “drawings” play out before her, is finally allowed to join them herself for the climactic song “Telephone Wire,” a desperate plea by the 43-year-old daughter to her dead father to make the memory of their last conversation different from the empty farce it was.

This is where it has to happen! There must be some other chances. There’s a moment I’m forgetting/ where you tell me you see me.

Smith allows herself to lose all semblance of emotional control as her character grows more and more desperate. Left alone in the car at the song’s end, she is a broken person, knowing exactly what comes next for her father and herself.

“Fun Home” isn’t all depressing, of course. In addition to “Changing My Major,” one of the early highlights is the Bechdel children’s “commercial” for their father’s side job (he’s primarily an English teacher) with a rousing song called “Come to the Fun Home” in which they sing, “we take dead bodies every day of the week, so you’ve got no reason to roam” and point out that their clients “like our formaldehyde.” And there are plenty of laughs elsewhere as well to sustain the audience through the box-of-tissues parts. But this is not any kind of traditional musical “comedy.”

Unlike the grand sets employed on Broadway and in the touring company that played here last year, Victory Gardens and set designer Yu Shibagaki opt here for a minimalist approach, allowing a few select pieces of furniture, for instance, to stand for the grand “home on Maple Avenue” that makes everyone who visits gawk. It’s disarmingly simple, and we don’t miss the bigger sets at all. Accomplished director Gary Griffin (“Hand to God,” London’s “Pacific Overtures”) put together a strong cast and milked them for everything he could. It’s always hard with child actors, but not only is Hoyt completely on point, but her stage “brothers,” played by Preetish Chakraborty and Leo Gonzalez, each has shining moments as well. And if Danielle Davis’ Joan doesn’t make us see right away why Alison falls for her, she makes it up in the moment of passion when she throws herself at her lover after their first kiss and is charming later in the Bechdel house. The small orchestra conducted by Doug Peck wrings every last bit of pathos and joy and whimsy and pain from Jeanine Tesori’s music, and by the time you leave the theatre you have experienced this brilliant play in as good hands as you could possibly want.