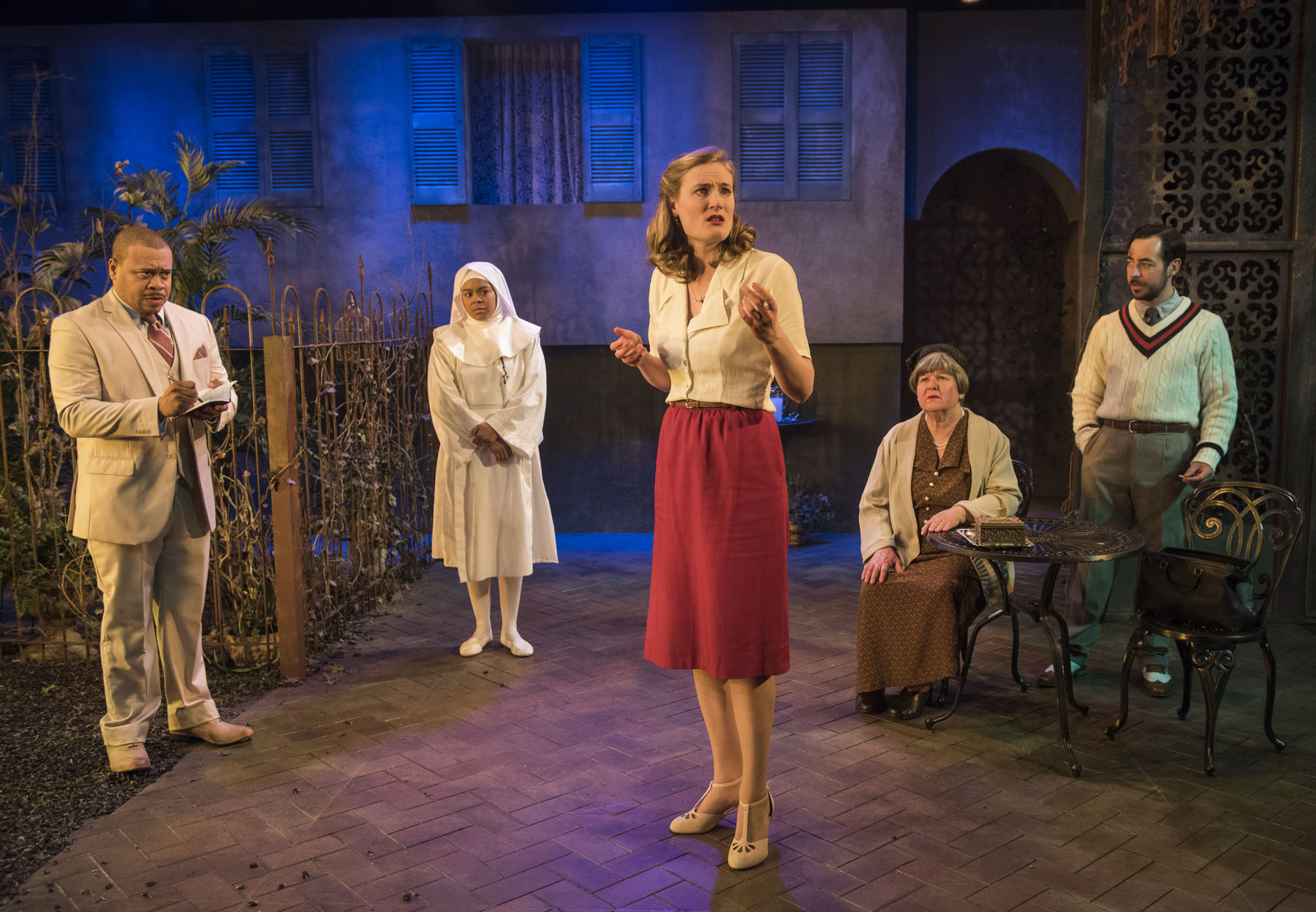 What is truth? That seems to be a question that has increasing relevance in an era in which we cannot believe what our media or our government tells us, and it is a question at the core of Tennessee Williams’ one-act play Suddenly Last Summer, now playing at the Raven Theatre. Though the play may show a bit of wear around the edges and is certainly far less than politically correct, Raven’s production is compelling and thoughtful and features two standout performances that make it well worth seeing. 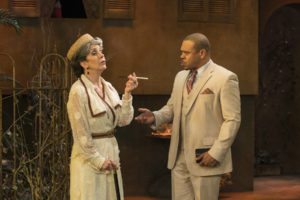 Mary K. Nigohosian is Mrs. Venable, the very wealthy mother of a recently-deceased son, with whom she had traveled every year of his adult life until last summer when he abruptly decided to take his cousin Catherine (Grayson Heyl) instead. Because Sebastian never returned from that vacation, having died in Cabeza de Lopo under less than clear circumstances, Mrs. Venable holds Catherine responsible. And because Catherine, who has been consigned to an institution because of the traumatic aspects of the experience, insists on a version of Sebastian’s death that her aunt considers to be “a hideous attack on my son’s moral character,” Mrs. Venable is threatening to hold her cousin’s bequest to her and her family in probate for years.

The play takes place in the gardens of Mrs. Venable’s home in the fashionable Garden District of New Orleans, in front of a jungle-like maze of plant life including ancient ferns and venus flytraps that Sebastian had planted and tended. (The set, by Joanna Iwanicka, is brilliant, as are Claire Chrzan’s lighting and Christopher Kriz’s sound and original music.) The elderly matron has called her niece in from the asylum to tell the story to her directly, and has invited a doctor (Wardell Julius Clark) to listen, in order to have him determine to treat Catherine with the then-new experimental surgery called a lobotomy, which the doctor had been pioneering. Also present for the gathering are Mrs. Venable’s housekeeper (played on opening night by Song Marshall), Catherine’s nurse from the home where she is staying, Sister Felicity (the excellent Ayanna Bria Bakari), and Catherine’s mother and brother (Ann James and Andrew Rathgeber), who stand to lose a fortune if she doesn’t change her story. It is a recipe for tension, and we certainly get it.

We also get some brilliant descriptive passages by one of America’s finest twentieth century playwrights. Nowhere is it more in evidence than in Mrs. Venable’s account of a trip she and Sebastian took to “the terrible Encantadas” in order to see the sea turtles laying their eggs and then, months later on their return, to see the babies hatch and desperately attempt to get to the sea.

The narrow beach, the color of caviar, was in motion, but the sky was in motion too…full of flesh-eating birds…and the sand all alive, all alive, as the hatched sea turtles made their dash for the sea while the birds hovered and swooped to attack.

The vicious assault on the sea turtles by the gulls is described with a mixture of revulsion and fascination, and it is later revealed to be somewhat symbolic as well. What stands out, though, is the power of the language. 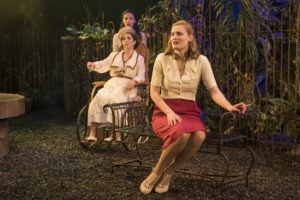 What stands out in this production are the performances of the leading ladies. Nigohosian is perfect as the old, asthmatic Mrs. Venable, who takes her daily daiquiri precisely at 5:00 and believed herself to be the only one who could make her son happy. Nigohosian adopts a matriarchal patrician disposition, voice, and speaking pace to indicate that this is a woman used to getting her way. Her deliberate slowness and regal temperament lead to a wonderful characterization. As to Heyl, she is all nerves, a blend of slow and manically fast paced speaking styles, flighty losses of thought, and desperation. When confronted by her family, especially her volatile younger brother (Rathgeber does his best but he really plays too old for the part of someone in his first year of college), Catherine is unsure how to react. But when she gets going on her story, Heyl commands our attention as she does everyone on stage as she paints the picture of the “vision” she has of what happened. The doctor elicits this information with a series of echoing questions that, frankly, I thought was a bit too frenetic: he had just told everyone to be quiet and let Catherine speak without interruption when Clark interrupts to ask questions that merely echo her statements. The text shows pauses and ellipses, indicating that Catherine trails off, which would be consistent with her character, but director Jason Gerace clearly wanted the pace up here, the result being that Clark’s character comes off as too anxious, not as professional at times.

The story of Sebastian’s death itself is intense as and as brilliantly described as the sea turtle story, but the question lingers at the end of which version of the truth—Catherine’s horrific tale or Mrs. Venable’s account of a quiet, obedient son who loved his mother and being with her until this girl stole him away—is real, if indeed either of them is. We are left, as is the doctor, in a state of shock, and it’s easy to understand why his mother wouldn’t want to believe what she is hearing. Catherine may be the voice of ugly reality sneaking into a carefully preserved facade of easeful perfection, but who can really say? As in today’s world, “truth” seems to be in the eyes of the beholder; there is much in both accounts that strains credulity. That something must be objectively true (Catherine tells us that God himself cannot change what has happened) is clear, but there are competing versions of what that truth is. Watching this powerful, fascinating play today makes for an interesting experience: part of it should make the viewer cringe, but philosophically it is much closer to our age than perhaps we would notice at first glance. That is what makes it a perfect show to cap Raven’s season.