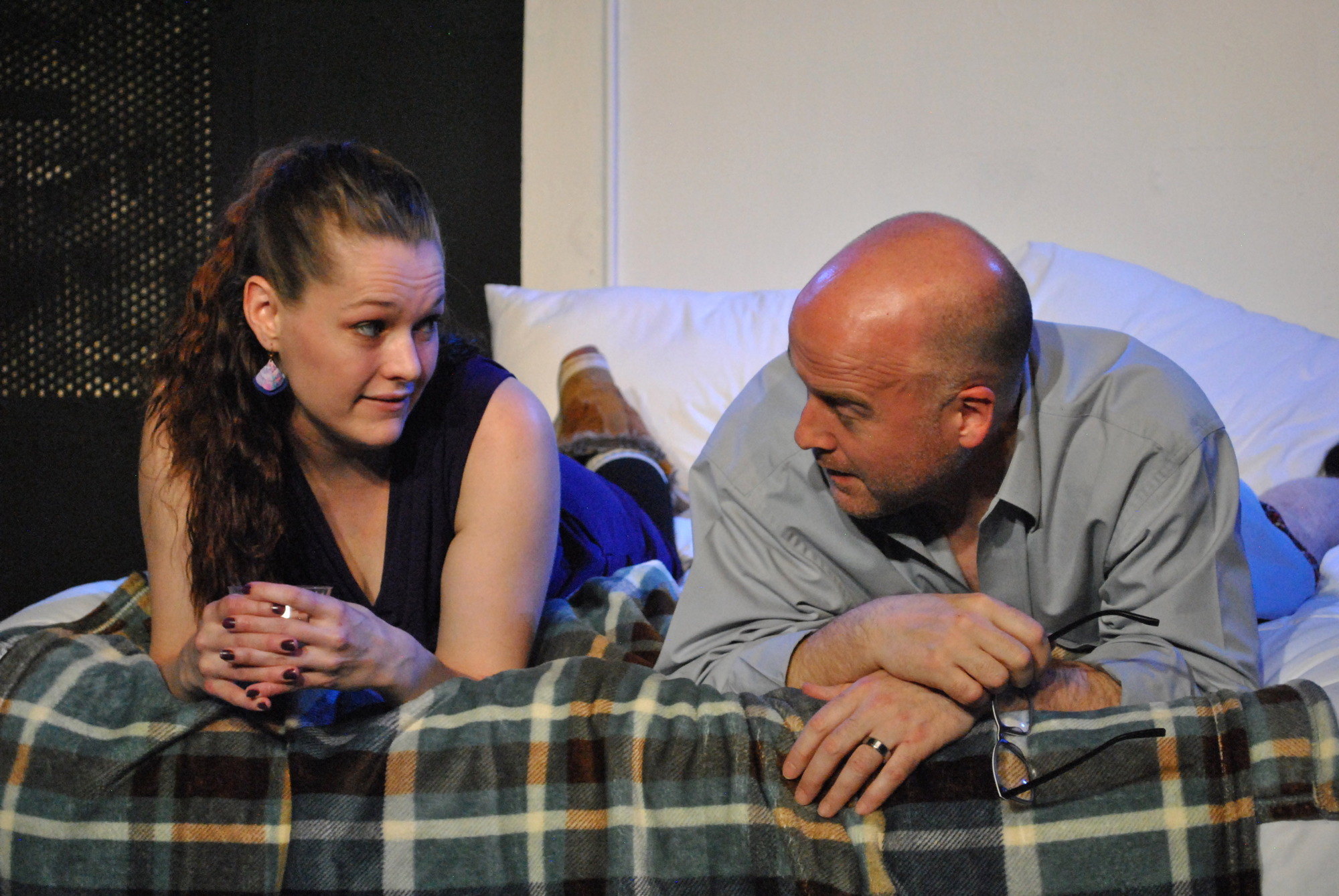 On the way home from seeing Come From Away at the Cadillac Palace Theatre on Wednesday night, my husband, knowing we were seeing an unknown play at a tiny northside venue the next day, asked (half-joking), “So what are our chances of being disappointed tomorrow night?” I laughed: if we went into International Falls expecting anything like a Broadway-level show, then the odds would be rather high. But this is a tiny black box theatre, the kind that is Chicago’s bread and butter; you never know when you’ll find something really worth your time. As it turns out, International Falls is a lovely, complex study of two people who pass through each other’s lives at one crucial juncture for each of them. Directed by Cody Lucas, it’s a small, quiet play—a far cry from a big musical—but no less able to leave its audience emotionally moved.

International Falls, written by Thomas Ward, introduces us to Tim (Sean Higgins), a failing stand-up comic who, after sixteen years, is pretty much ready to throw in the towel. He is estranged from his wife and far from his son, playing a Holiday Inn in the titular Minnesota town, and he hates it: he can’t even call up enough enthusiasm to deliver any kind of decent performance. The play toggles back and forth between his devastatingly unfunny routine and his hotel room later that evening, in which he finds himself in a one-night stand with Dee (Marie Weigle), the hotel’s desk clerk, herself an aspiring comic with some serious personal problems caused by a philandering husband.

You’d imagine that a play about two comics would be very funny, but—though it contains some brief moments of laughter—this one defies that expectation. The play isn’t about the comedy Tim and Dee would like to deliver, but rather the broken lives that many good comics understand can serve as fodder for their humor. Tim even advises Dee that, should she pursue this kind of life, she should be ruthlessly honest and hold nothing about her life back: it is human nature for audiences to laugh at other people’s misery. The Germans, who have a word for everything, call this schadenfreude. But Tim’s pain has crossed a threshold to a point at which he can no longer get past it to make it funny. And Dee’s has yet to reach a place where she has distance enough to laugh at it. Instead, amid some significant drinking, they seek temporary comfort in each other.

Higgins and Weigle are both excellent here. Higgins captures the emotional exhaustion of a man who knows he is facing an existential crisis in his career and his life. He makes no effort to hide this, spending the play clothed only in boxers and a semi-unbuttoned shirt, a disheveled condition that we even see when he is onstage (a reflection of his inner self-image, of course, rather than his actual stand-up attire). Weigle, equipped with a very passable and understated Minnesotan accent, is able to mine Dee for all of the inner confusion and pointed passion that a woman in her position would feel as she blatantly uses Tim as a kind of revenge on her husband while simultaneously attempting to see whether a career as a comic might work for her. Both of these flawed humans come together on this night to comfort each other as their lives fall apart.

This is not a play without its flaws. By the very nature of Ward’s structure, we are forced to sit through some “comedy” so painfully lacking in humor that we almost dread the scene switching back to the club. Ward and Lucas use these routines to highlight the breakdown of Tim’s character, but we still have to watch uncomfortably as he falls apart in front of us in the middle of a show, and frankly there is at least one stand-up scene too many here. Also, both the stand-up routine and the hotel room scene need to come to conclusions, which results in a play with a double ending. (Actually it is a triple ending, as there is an important coda grafted onto the end.) Despite these issues, though, International Falls is a poignant and powerful play. It does not shout loudly, but in its own quiet way it reflects the turmoil in people’s daily lives that form the basis for our more dramatic moments. It is a compelling character study of two people stuck in a frozen northern Minnesota winter at a bitter crossroad in their lives. Sadly, it mirrors life, in which happy endings are never guaranteed, in a much more familiar way than any uplifting musical could ever hope to.

International Falls is presented by Agency Theatre Collective and End of the Line Productions at the Nox Arca Theatre, 4001 N. Ravenswood Ave #405, Chicago through Aug 30. Check the website for specific dates, times, and tickets. Find more information about current plays in our front page recs and at theatreinchicago.com.