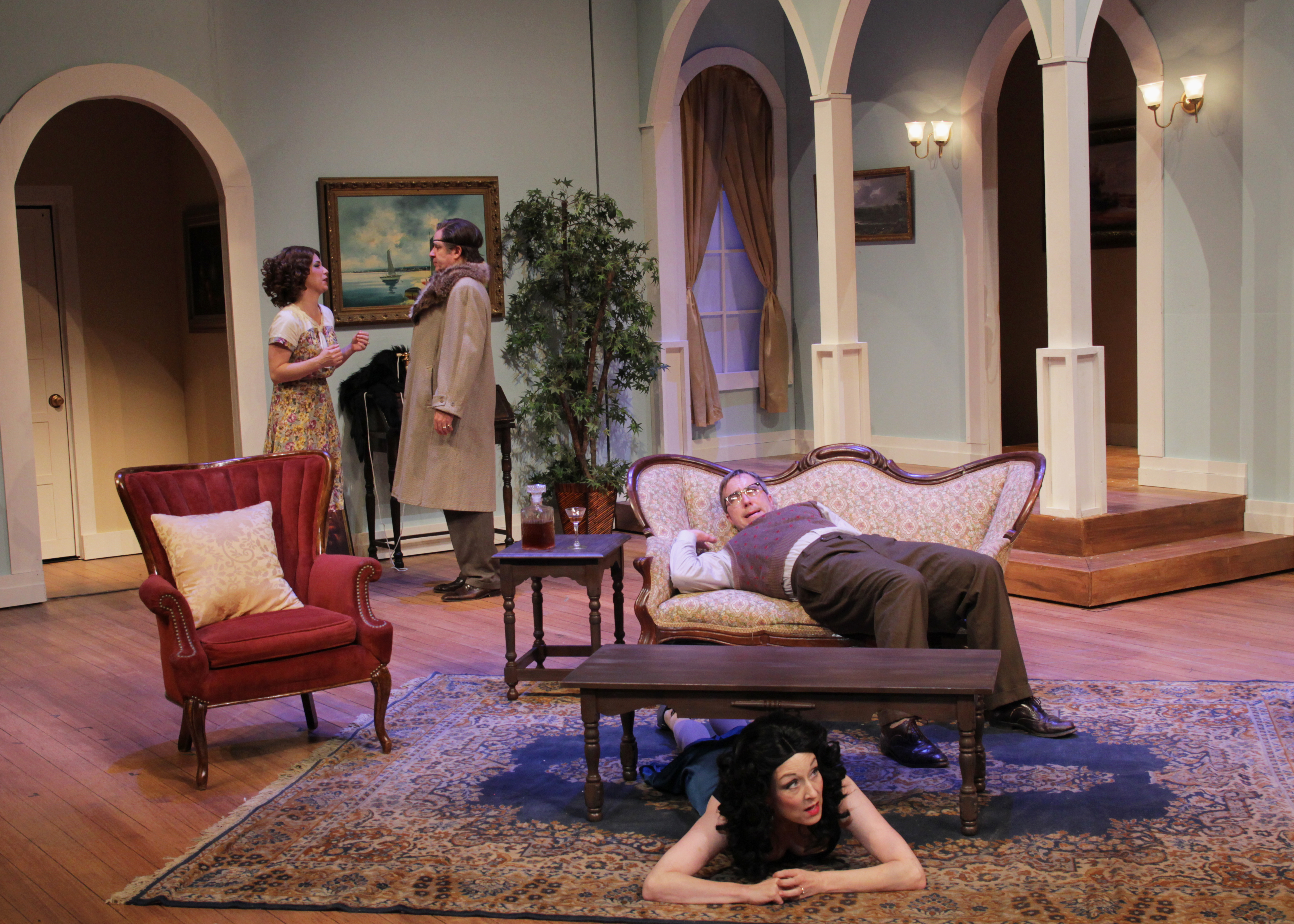 There are a few things you expect from a good French farce: lots of doors (of course), intertwining sexual relationships, mistaken identities, and tons of laughs. Buffalo Theatre Ensemble’s The DingDong or How the French Kiss, adapted by Mark Shanahan from Georges Feydeaux’s Le Dindon, fills the bill nicely, making it a fun, if frivolous late summer entertainment.

The plot of these affairs is normally secondary to the complications that the author can add into them, but for the record: Vatelin (Brad Lawrence) and his wife Lucy (Lisa Dawn) live in Paris in 1938, a time when (at least if you ignored the heated political climate in Europe, which this play does), anything seemed possible. He is a lawyer who collects paintings done by relatives of the Masters. They are happy in their marriage but the passion has left it behind. Enter Pontignac (Robert Jordan Bailey), a college friend of Vatelin who wants nothing more than to go to bed with Lucy, and Redillon (Quinn Bayola), Vatelin’s current best friend, who wants the same. (Vatelin is blithely unaware of all of this plotting against his marital bed.) At the same time, the woman with whom Vatelin had a brief sexual encounter on a business trip to Rome (Kelli Walker) shows up, demanding that he continue the affair or she will commit “sujicide.” From there, it’s a series of zany moments in two hotel rooms as couples (everyone but Lawrence plays multiple characters here) follow each other into the chambers in carefully choreographed near-misses until the inevitable happy ending as all of these characters learn something from their encounters.

Apparently, “how the French kiss” is very, very quickly as they are rushing through doors, if at all. But that’s OK: the point of a farce like this is to watch as five actors play thirteen characters with quick changes and quick entrances and exits, out one door and in another, until you are so lost in the silliness of it all that you no longer even care if it makes sense. And director Connie Canaday Howard sees to it that the action is fast-paced, that the characterizations (often actually caricatures of Hungarian, Italian, and French types) are clearly defined, and that the laughs come fast and furious. Pauline Olesky’s set is lovely and versatile (hats off to the set crew for one of the most impressive intermission set changes I’ve seen since Noises Off), and Christopher Kriz’s sound design allows for lots of fun with bells. (“Dingdong,” anyone?) Cat Wilson’s lights are very effective, and Rachel Lambert’s costumes…not only are they great at communicating character but also they’re totally wonderful at facilitating quick changes. (It feels odd to be especially commending costume design for a play in which all of the actors end up in their underwear, but what can you do?)

It’s a play designed in every way to make you laugh. All of the actors are wonderfully over the top and having a great time. Dawn, sparkling in her main role, is especially great as a dotty older deaf woman with extreme flatulence. Lawrence’s performance is all in overdrive, as his character goes through so many things in such a short time that it has to be overwhelming. Bailey, a BTE regular, brings several levels of self-destructive behavior to his three characters. Walker’s accents and caricatures are universally hilarious, and Bayolla’s sex-addict Redillon is tremendous fun. It’s the kind of play where, if the actors are not enjoying themselves, it just can’t work.

It’s also the kind of play where, if they do, it almost can’t fail to entertain. And although The Dingdong will never be mistaken for great literature, it definitely does entertain. It is a thoroughly engaging, thoroughly silly frolic, and just what you need as summer winds to a close.

The DingDong, or How the French Kiss is a Buffalo Theatre Ensemble production now playing at the McAninch Arts Center, 425 Fawell Blvd, Glen Ellyn, until Oct 7. Performance times vary; check the website at McAninch Arts Center for tickets, schedule and times. Find more information about current plays on our Current Shows page and at theatreinchicago.com