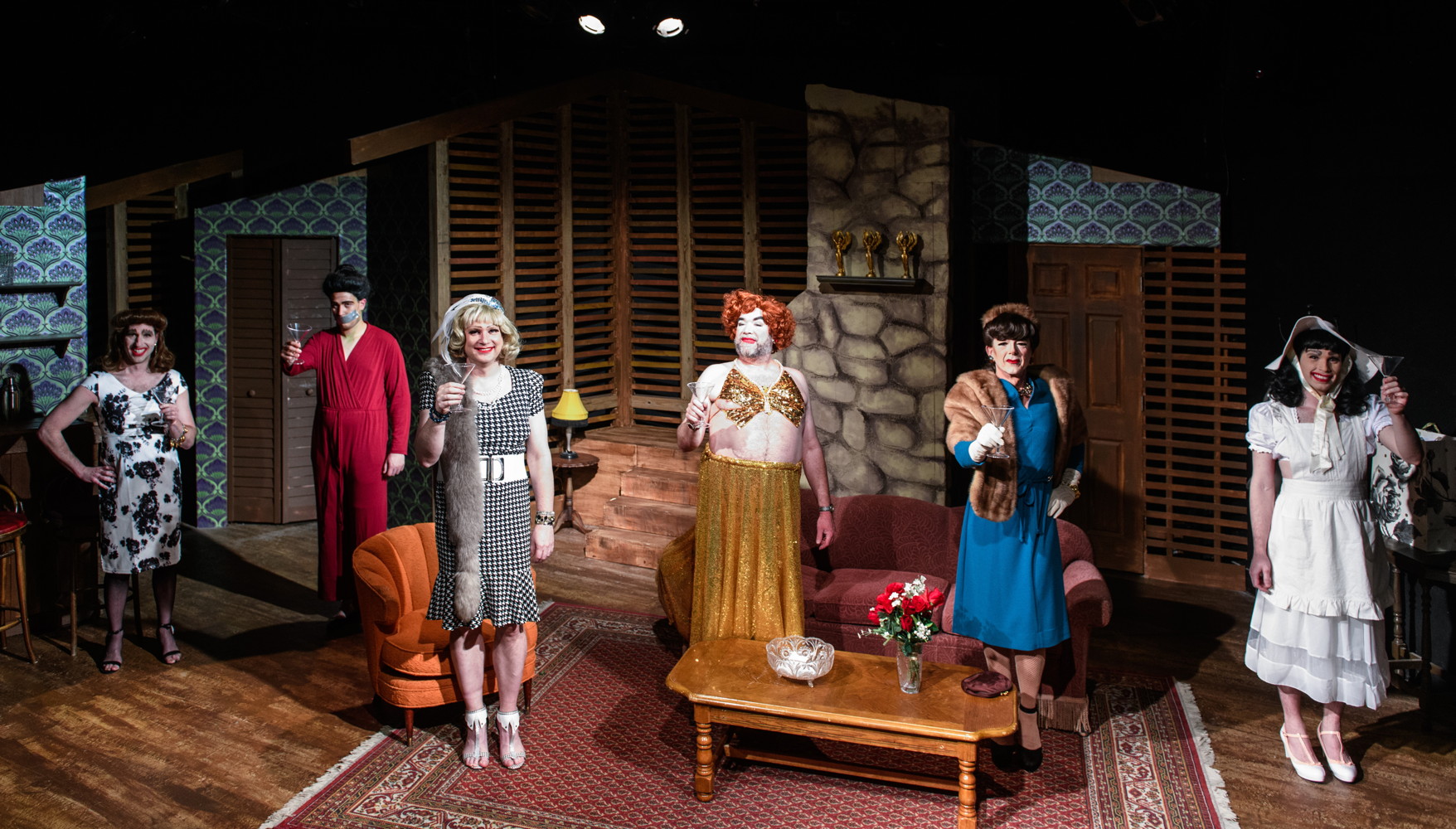 So you were hunting for a campy drag murder mystery comedy that pays tribute to old Hollywood stars? I don’t know why you have such specific needs, but look no further: Glitterati Productions has exactly what you seek in Who Killed Joan Crawford?, now playing at the Athenaeum Theatre. Michael Leeds’ play, directed here by John Nasca, is about as silly as they come: on a dark and stormy night, five men arrive at a birthday party dressed (as requested by their soap opera star host) as Joan Crawford in one of her iconic roles, only to discover that someone is killing them off one by one. This brisk seventy-minute play, which takes place during the 1993 Tony Awards and pokes fun at Hollywood, Broadway, and show business in general, is a well-done, surprisingly fun little farce.

Of course, having five gay guys dressed (with varying degrees of success) as Joan Crawford makes for a good start, but Leeds’ script has a lot of fun beyond the visual, and although it has a significant amount of insider humor, it is easily accessible by those who know nothing about the titular movie star. As to the mystery: these five men might have been brought here by a mutual friend, but they don’t all necessarily care for each other. And one of them has brought along the (much younger) ghostwriter of his memoir on his arm. Further, while they are all here, the birthday boy is oddly absent. And did I mention it’s a stormy night? The violent thunderstorm drenching the area has completely cut them off from all possible avenues of help. Red herrings abound as the bodies pile up, and Nasca’s generous direction allows the actors (and the audience) to have a grand time while the mystery and the comedy unwind.

The very talented ensemble is anchored by John Cardone as Gene Harlow (yep, that’s right), a wealthy man who has agreed to produce a musical called “Last Man Standing” so that Trick (Luis Jiménez), the soap star, can transition to Broadway. The musical will also mark a comeback chance for Leo (Patrick Rybarczyk), whose desperate (and vain) attempt to craft a memoir isn’t going to help him to regain his box office potential. Cardone, dressed impeccably as Crawford in “Mildred Pierce,” impresses with his droll line deliveries as the evening gets stranger and stranger.

Rybarczyk’s fawning Leo, who spends a significant amount of the evening upstairs watching the Tonys in the company of corpses, is so self-centered that he randomly breaks into song snippets from the new musical even though people are dying all around him. His companion, David (John Magaña), who seems at first to be merely a boy toy, is hiding something sinister behind his youthful face, and observant Harvey (Lee Wichman) makes it his business to find out what. Meanwhile, Michael Jack Hampton’s hapless Stewart spends the evening prancing about in an ill-fitting version of a dress from somewhere (“The Women?”) and being the butt of jokes.

Director Nasca, who also designed the costumes—and dressing five guys as Joan Crawford couldn’t have been easy—keeps the show moving briskly along and guides his cast to some fine work. He has also attracted a strong creative team. The show plays out on a set by Jonathan Berg-Einhorn that easily evokes the kind of woodsy cabin to which Trick invites his guests, while lighting designer Sam van Loon and sound designer Matthew R. Chase conspire to create a pretty realistic thunderstorm.

Who Killed Joan Crawford? won’t change your life (unless it gives you nightmares of masculine Joan Crawfords haunting your sleep), but it is a lot of fun, which is pretty much what you look for in a campy drag murder mystery comedy (which, by the way, really ought to be an actual genre). Who knows? You might just die laughing.

Who Killed Joan Crawford? is a Glitterati Production now playing at the Athenaeum Theatre, 2936 N. Southport, Chicago through Nov 10. Check the website for specific dates, times, and tickets. Find more information about current plays in our front page recs and at theatreinchicago.com.