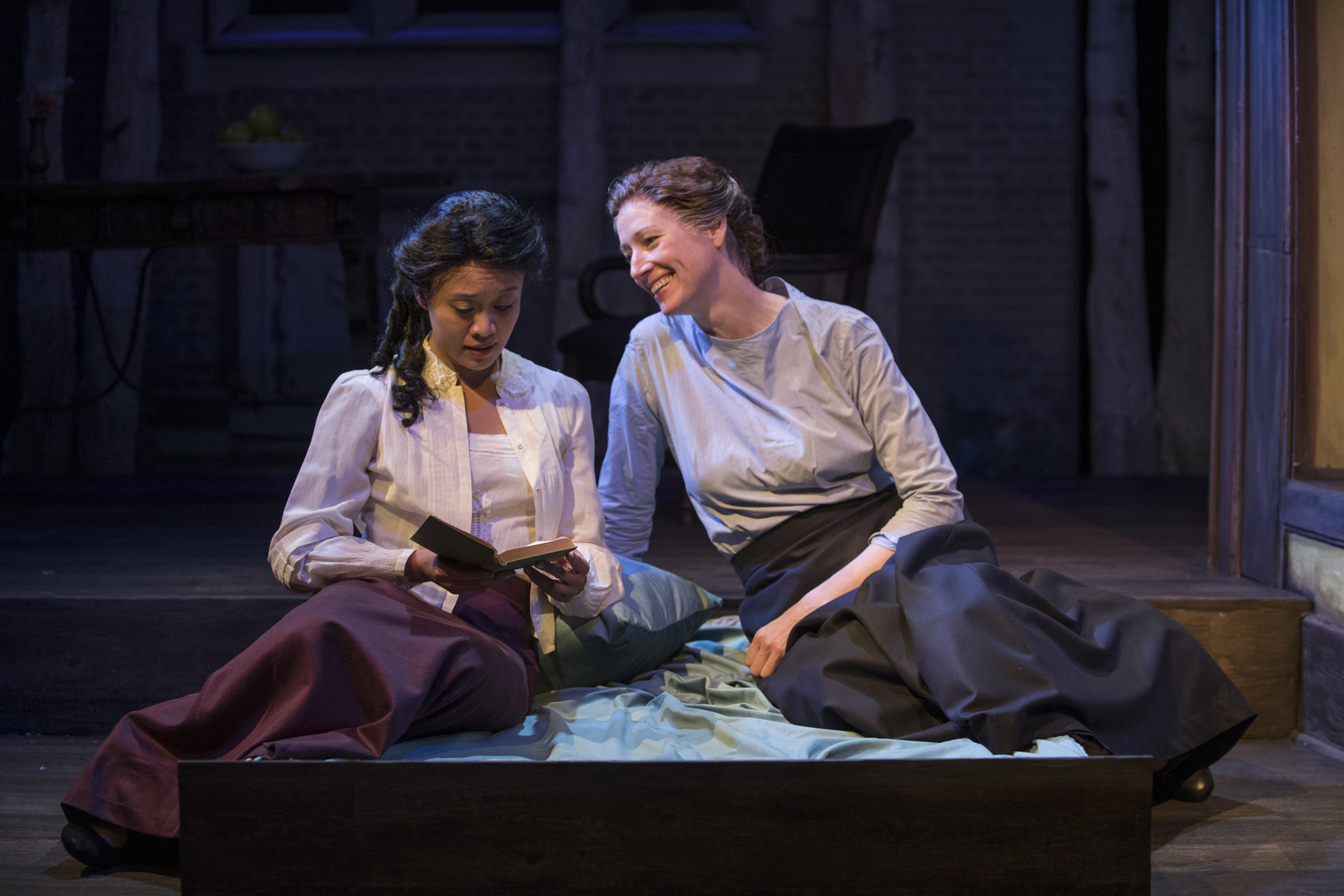 Both LGBT history and feminist history prior to the sixties are fairly murky territory, so perhaps it is not too surprising to discover, as we enter Pride month, that two women who were instrumental in both have been all but ignored by most historians. After all, the woman who authored the most iconic quote about women in history doesn’t even usually get credit for her own words. About Face Theatre’s Bull in a China Shop can’t do anything about Ulrich, but it seeks to rectify the first matter with the inventive, hilarious tale of Mary Wooley and Jeanette Marks, whose fifty-year love affair made them a part of everything from women’s education and suffrage to women’s rights in China to Adolf Hitler, all while Wooley served as president of Mount Holyoke College and brought the erstwhile seminary into the 20th Century with a bang. 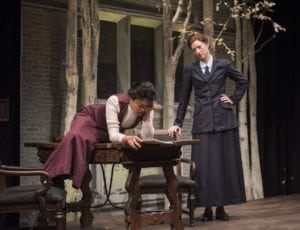 The brisk eighty-minute show (directed by Keira Fromm and played without an intermission) focuses on the Mount Holyoke years, during which Wooley led a self-styled “revolution” against schools (like the old seminary version of her own college) that sought to churn out well-behaved women to become suitable wives. As portrayed by Kelly Simpkins, Wooley is a fiery, complex woman who is way ahead of her time. In the opening line of the play she proudly refers to herself as a “bull in a china shop,” someone who is extremely unlikely to daintily march through without breaking things. It’s an apt metaphor: Wooley arrives at Mount Holyoke with an agenda (and her female lover) and utterly rocks the establishment. Simpkins plays her as a study in contrasts: she is all about her “revolution” and yet at the same time dresses in ultra-conservative, almost masculine clothing and is prone to miss the forest for the trees, focusing for example on the school’s donors’ concerns instead of the cause of women’s votes. Her staid control is evident in every scene she is in, shaken only in one lovely monologue that takes place while she is on a visit to China. It’s beautifully written, and Simpkins brings all of its emotions to light.

Marks, her lover and the woman who keeps her moral compass focused at times when Wooley’s successes threaten to overwhelm her, is played by Emjoy Gavino as a youthful (she once had been Wooley’s student) and unapologetically radical English professor. Her role as Wooley’s conscience kicks in on several occasions during the play in which the idealistic Marks finds the need to give her lover a kick in the rear on such issues as suffrage. (Wooley was very much in favor of it but, after a decade of school administration, was apparently also becoming too cautious, endangering her “revolution” by failing to lead it.) Without Marks, the play implies, Wooley’s well-behaved ambition might have ruined her chance to make history. Meanwhile, Marks was, despite her initial lack of interest in teaching, becoming a great one. In “lessons” about the Virginia Woolf novel Orlando (itself rather revolutionary for its time), Gavino shows us all of the exuberance and outlandish thinking that help Marks become a favorite instructor at the college and one of its highest-rated professors. 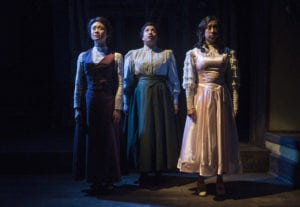 The rest of the five-woman cast are Mary Beth Fisher as Dean Welsh, an old-school matron and Wooley’s chief antagonist throughout her tenure; Aurora Adachi-Winter as Pearl, a student who blatantly “ships” the relationship between Wooley and Marks (yes, the script by Bryna Turner does blend modern terms and lots of f-words into this early 20th Century story) and yet wants nothing more than to enter into an affair with Marks herself; and Adithi Chandrashekar as Felicity, a philosophy professor who shares an apartment with Marks. Each of these actors enjoys showy moments. Fisher, playing the Dean as the quiet foil, gets a lot of droll one-line zingers in that whisk right past her mark. Felicity is a less rounded character but Chandrashekar gets a lot of laughs from several well-placed simple phrases and actions. However, the best moment for the three (and one of the best of the night) belongs to Adachi-Winter as Pearl screams out her unrequited love into the Holyoke night, threatening murder, self-harm, and anything else she can think of to get Marks’ attention. The scene goes on a bit too long, but that doesn’t diminish Adachi-Winter’s raw angst. All of these actors contribute considerably to the show’s success. 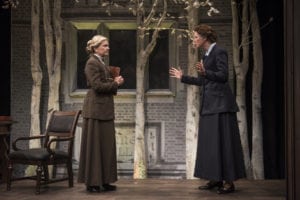 But of course it is ultimately about Wooley and Marks and their open lesbian relationship in an era long before anyone heard of gay rights. Like Gertrude Stein and Alice B. Toklas, the two educators defy the mores of their era and create such a warm model of what a relationship between women can be that Welsh complains that Mount Holyoke grads are no longer getting married at all. Simpkins and Gavino make us believe that this marriage of two minds, despite the impediments it does admit, not only completely makes sense but is pretty much inevitable. We can easily see what they see in each other, and—because they are such opposing types—that is a real tribute to fine acting.

The set, by William Boles, is a pastiche of indoor and outdoor settings and serves beautifully for director Fromm’s quick scene changes, being able to switch on a dime from an office, for example, to the leafy walkway outside a classroom. This is also aided by a creative and dynamic lighting design by Claire Chrzan (one scene in which both women are highlighted against nighttime shadows particularly stood out for me) and some excellent sound work and music provided by Eric Backus. This is one show in which the traditional nod from the cast to the tech booth during the bows is met with applause that just gets even louder.

Laurel Thatcher Ulrich would absolutely enjoy Bull in a China Shop. I hope she somehow gets to see it (though since she’s a professor at Harvard it probably would need to play Boston for that to happen). This is a play that, imaginatively written and remarkably timely, is as educational as it is entertaining. And that’s saying a lot, because Bull in a China Shop is a terrifically entertaining play. Full of excellent acting and very funny moments alongside some highly poignant ones as well, this play delivers. After a two-hour slog into the city, it was precisely the ticket I needed: a night of priceless mirth and powerful messages. It’s easily in my top ten for the first half of 2018.

Bull in a China Shop is an About Face Theatre production now playing at Theatre Wit, 1229 W. Belmont Ave, Chicago, until June 30. Performance times vary; check the website at About Face Theatre. Find more information about current plays on our Current Shows page and at theatreinchicago.com.