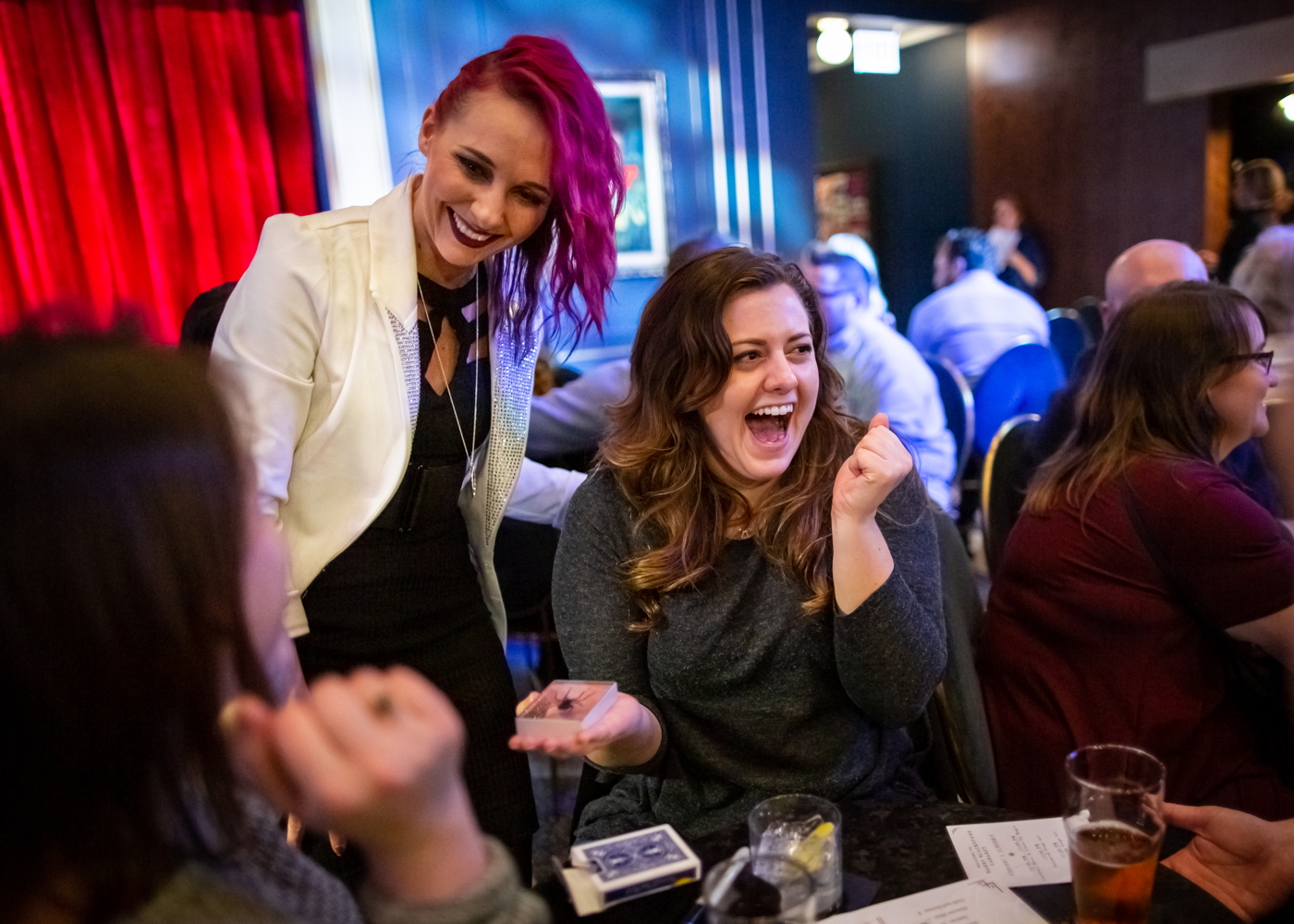 When Joey Cranford’s wife jokingly bought him a magic kit they had seen at Walgreens as a Christmas present, she had no idea what she had unleashed.

“There was an especially good trick in there,” he says, one that spurred the research-oriented Cranford to begin exploring what magic is and eventually led him to discover its unique history in the city of Chicago.

“What I fell in love with was this community of artists I had never met before,” he says. “There was this whole network of magicians who had no real home base. (In the improv world), there’s a whole roadmap for success, but there was nothing for magic.”

This had not always been the case. During much of the 20th Century, which Cranford calls the Golden Age, Chicago-style magic, where magicians moved from table to table doing card and coin illusions, thrived at various bars and clubs throughout the city. It was mostly associated with Schuliens, a family-owned northside restaurant but there were many other venues where you could watch performers like Eugene Berger, Jay Marshall, Ross Johnson, and Heba Huba Al Andrucci.

Sadly, by the 1980s, these clubs were closing down. Cranford theorizes that the rise of stand-up comedy displaced it, but he also wonders if “bad magic” killed it. With so many venues, he opines, there were bound to be second-rate performers who would turn people off to the scene. People who witnessed these poorly trained practitioners may have given up on magic for good. “When the contract is there for you to fool me and I see everything,” Cranford says, “you’re wasting my time.”

Eventually the last of these magic bars closed down, and what had been a golden age of Chicago magic faded into obscurity. Most people didn’t even realize it had ever existed. Then, several years ago, after mastering that one great trick, Cranford read a book on the history of magic.

As a Chicago historian, he knew a lot about the city’s past, but “had never heard this story.” At the end of the book, the author had placed what Cranford describes as a “call to action.” Maybe, he thought, “we could do it again.”

His vision of a new home base for magic began in 2015 when a friend was opening Uptown Underground and offered him one night to organize a magic show. Cranford made the decision to “tell the story” of Chicago magic in every show.

“I had never said the word ‘magic’ in a sentence and then I was saying it 30 times a day.”

Jan Rose, a magician who acts as frequent emcee for the shows and is responsible for telling that story to the audiences, feels that Cranford’s decision to incorporate it is responsible for a lot of the success of the club. “That excitement, that wonder, and that mystery of seeing magic closeup is all about Chicago magic: every magician (here) is a piece of that history.”

It didn’t take long before the shows became so successful that they needed their own space, and Cranford’s concept became the Chicago Magic Lounge, whose unusual Andersonville space opened in February 2018. He says that “form followed function” in the creation of the club, which is specially designed to give customers a true taste of Chicago-style magic, the up close and personal kind of magic performed right at the bar or your table, as well as a cabaret where they can see headline magicians.

The lounge itself is hidden behind what appears to be a laundromat at 5050 Clark St, which is intended as both an homage to the building’s past (history is everything) and a way that people will feel the pull of something unusual from the moment they walk through the door. But once they figure out how to get past the false front, many more surprises await inside that are not limited to sliding or hidden wall panels.

The entertainment begins at the fully stocked bar (a light food menu is also available), at which veteran Chicago magicians, many from the Golden Age—on any given night they include such performers as Al James or Jeff Bibik—draw audiences in with their banter and their illusions. Once inside the art deco cabaret itself, patrons are treated to magic performed at their tables by a band of roving and personable magicians before the main show even starts.

The Chicago Magic Lounge has developed quite a stable of entertainers to populate both the table magic and the stage shows, and Entertainment Director Benjamin Barnes is responsible for finding them.

“Our job is to expose people to how rich magic is as a creative form and then to give them variety,” Barnes says. He understands that the best magicians are those who have strong social skills and are completely comfortable in front of an audience. “The magic is a given; the tricky thing is everything else.”

As to variety, Barnes says he realizes that the profession of magic has long been a male-dominated one, but he strives to change that. “You’ll see yourself” reflected on the stage, he assures. “Every night at Chicago Magic Lounge there will be at least one woman, one Person of Color; all are bad-ass magicians.”

One of these women is Rose, a longtime veteran of the Chicago and national magic scenes who says that, when she got into magic, “I was so excited about the job that I didn’t even notice that it was a male-dominated industry.” Still, she says that, even after she started to understand that, “I was embraced by the magic (community); I never felt any kind of discrimination at all. Today, young women entering the industry want to take the stage in a strong way in order to be taken seriously, but if you work hard and are a professional it doesn’t matter what race you are, what sex you are.”

Paige Thompson is one such young female performer. Thompson was given a magic kit by her grandmother when she was just six years old and became obsessed: “I started doing birthday parties. I was making money in high school and started wondering, why can’t I do this forever?” She acknowledges that most magicians are men but feels it is due to the fact that “girls just don’t see other girls doing it.” But she agrees with Rose that “guys (in magic) are always very welcoming. There are ways to work around things like lack of pockets (a magician’s favorite place to hide things like palmed cards): I don’t care what I have to do to make it work.”

Ryan Plunkett, the Chicago Magic Lounge’s Production Manager as well as one of its frequent performers, loves the fact that “everything we do is tied to the roots of Chicago-style magic; doing this has made me appreciate it more.” He says that performing magic is a joy. “I love watching people not be able to cope with their thoughts as they see things they’ve never seen before. When you see a good act, it’s the best thing in the world.”

Everyone agrees that what Cranford has created is essentially a family. “I think a big reason this works is that you have a lot of people who not only love what they do but they love why they do it,” which fosters a cooperative environment, says Plunkett. Thompson, who loves the fact that she has been able to learn from so many other magicians, says that “so many times in entertainment people are very competitive, but here for the first time I felt like we all want to work together.” Rose quotes her husband, magician Danny Orleans, as saying, “All of the magicians (at the lounge), stand on each other’s shoulders.”

Perhaps it is this atmosphere as much as anything else that draws the customers. Cranford notes that he does very little advertising, but the place is packed most nights. People are “moved by the story we tell,” he says. “Word-of-mouth works best if you make your customer the hero of the journey, if you give them a story that is worthy of saying, ‘listen to this.’” It is this focus on the personal, he says, that sets Chicago Magic Lounge apart: “if (we) can make you feel special on that night, people will remember.”

Rose, who prides herself on getting to know individual members of her audience before each show, agrees. “The personal touch makes it special. Our audience is young people, who bring their parents, who bring their friends, often to celebrate birthdays, anniversaries: people not only enjoy the performance but also the experience.”

“What makes people come,” says Barnes, “is curiosity. People love magic, but they don’t know until they see it. The thrill for me is that I love watching audiences watch magic.”

Thompson enjoys that as well, and she argues that the more creative the performers are, the better the audience’s experience will be. “The best part of magic is being creative. People think of magicians as a guy pulling a rabbit out of a hat, though I honestly don’t think I’ve ever seen a magician pull a rabbit out of a hat.”

Cranford, who believes that “the Silver Age of bar magic is this next generation,” the joy is found every time he watches a new trick. “I love being fooled,” he says. “I don’t want to know how it’s done,” adding, “Truly, the secrets of magic are stupid, but the effect is amazing.”

The Chicago Magic Lounge is located at 5050 N. Clark St., Chicago. Performances are nightly with a family-friendly matinee on Sunday. chicagomagiclounge.com; 312-366-4500.