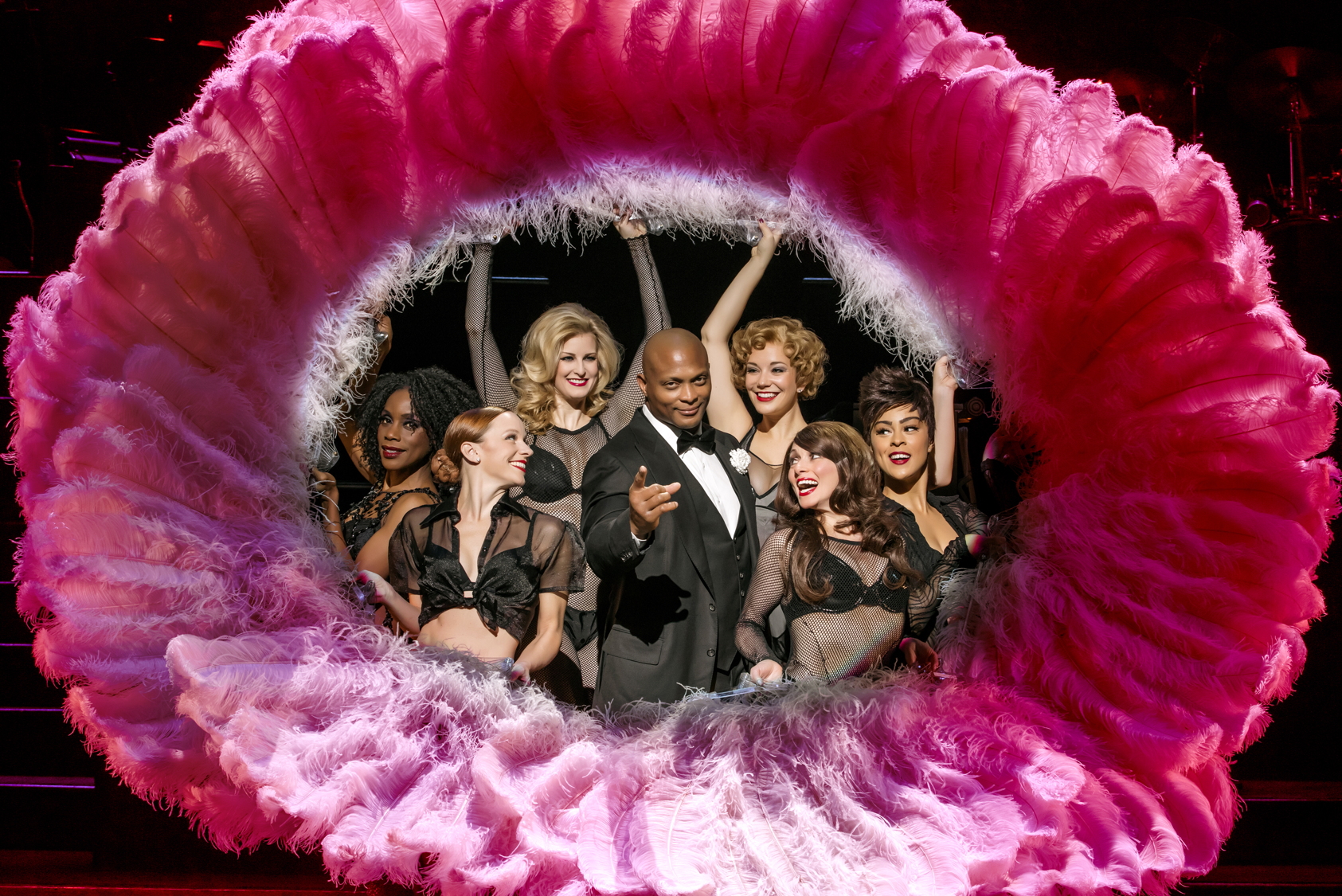 Chicago is back in Chicago once again, this time for a one-week run at the Cadillac Palace. The 1975 Bob Fosse and Kandor and Ebb musical is still the cynical, funny, decadent celebration of our city’s historical culture of corruption and coddling crime played out in vaudeville style, and it is still an absolute joy. This version, a touring descendant of the 1996 Tony Award-winning revival choreographed by Ann Reinking “in the style of Bob Fosse” and still playing on Broadway, features some top-notch performances, strong direction by Walter Bobbie and fine work by David Bushman recreating Reinking’s dance movements. If you’ve never seen Chicago—and even if you have—it’s well worth a trip downtown to see it.

Chicago has a long-standing reputation for casting celebrities in key roles, and this touring version is no different, casting former NFL player Eddie George as lawyer Billy Flynn. George acquits himself pretty well. He has a solid, commanding presence onstage and a surprisingly good singing voice. He may not be a great dancer, but the choreography doesn’t demand much of him and anyway he is surrounded by an ensemble that is more than capable of handling that aspect of things.

More excitingly, this production gets powerful starring performances from Dylis Croman as Roxie Hart and Lana Gordon as Velma Kelly, the two “merry murderesses” who are the focus of this play. (Chicago was based on the 1920s trials of two very similar women, both of whom were acquitted basically because in those days the city didn’t hang pretty women. The musical lampoons this fact and also the habit Chicagoans of the time had of making celebrities out of criminals.) Gordon, who opens the play with a splendid performance of “All That Jazz,” is a wonderful Velma, her overt sarcasm at the newcomer Roxie melting into desperation as she finds herself losing her own claim to celebrity, supplanted by Roxie’s newer (and thus greater) claim. Croman is perfect as Roxie, whose initial ignorance of consequences (she actually freely confesses to the investigating officer) is stripped away as Flynn helps her to see that the courtroom is very much a show and requires a great performance of innocence.

Also standouts are Jennifer Fouché as Matron “Mama” Morton, the corrupt but friendly woman in charge of the female ward of Cook County Jail, Paul Vogt as Roxie’s put-upon husband Amos (whose rendition of “Mr. Cellophane” is both sympathetic and funny), and D. Ratell, whose notably flexible voice helps create the character of Mary Sunshine, a sympathetic reporter who helps spread Flynn’s version of Roxie’s actions. The excellent onstage orchestra is conducted by Andrew Bryan, who has a few funny moments of his own due to his interaction with some of the main characters as they move past him to exit the stage.

Chicago has always been a wryly funny and inventive show. Its vaudevillian structure breaks the fourth wall often, inviting the audience into the play and allowing its characters—especially Gordon’s Velma—to speak directly to us. Each number is a parody of one vaudeville trope or another, the best example being the ventriloquist act that Flynn and Roxie perform for the press, as she plays the “dummy” while he feeds them lines. (Croman is wonderful here.) It’s numbers like this that maximize the appeal of seeing the show live (as opposed, say, to watching the movie, which itself is excellent): we’re immersed in the opposing elements that make the jazz age fascinating: innocence and decadence. None of it is meant seriously, but with the Fosse-esque dancers filling the stage we find ourselves drawn in. And the fact that the orchestra’s enormous box pushes all of the action forward serves the solo numbers well, making them that much more personal even in a large space like the Cadillac Palace. George may not be the best Flynn ever to take the stage, but this is one touring show that stacks up to the original; it’s easy to recommend it.

Chicago is now playing at the Cadillac Palace Theatre, 151 W. Randolph, Chicago, through May 12. Check the website for specific dates, times, and tickets. Find more information about current plays in our front page recs and at theatreinchicago.com.