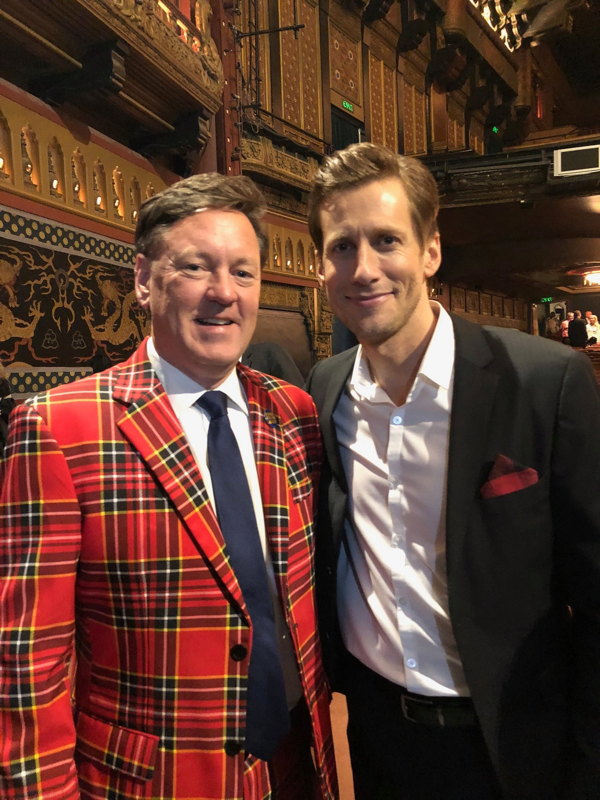 Kevin Tuerff (left) and Andrew Samonsky, who portrayed him in the original Broadway cast of “Come From Away”

“It’s a very American and Canadian story,” said Kevin Tuerff about what happened in Gander, Newfoundland, on Sept. 11, 2001.

That story—which includes Tuerff’s experiences—forms the basis for the landmark musical Come From Away, which just finished a Chicago run and will return next summer. But for Tuerff—a gay man and lifelong Catholic whose book about his experience, Channel of Peace: Stranded in Gander on 9/11, is available on ebooks and on an audiobook he narrates—the play is only the most visible reminder of an event that changed his life.

Both Channel of Peace and Come From Away tell the story of 38 transatlantic flights that were diverted to the small town of Gander when US airspace was closed following the attack. Gander, which had only about 9,000 residents at the time, had an oversized airport stemming from the days before jumbo jets when it was a practically required refueling stop, so it could ( barely ) accommodate all of the planes. But it was the influx of 6,700 “come-from-aways,” as the locals call non-Newfoundlanders, that showed the Canadians’ true nature. The town and citizens of Gander not only welcomed these strangers into their midst but housed, fed, and clothed them during their days-long layover. Every large space in town became a hostel, and many of the travelers were invited directly into people’s houses in a display of human compassion that both the book and the musical celebrate.

“Compassion means to engage in the suffering of others and that’s what Gander did,” Tuerff said, doubting that such things would occur now in the United States. “If they wanted to have empathy,” he added, “they would have sent thoughts and prayers and a few pizza boxes.” He said that he was glad to see the kind of compassionate outpouring that followed Hurricane Katrina, but wonders, “Why does it take a natural disaster or a terrorist attack to get people to act this way?” He remembered that, in the immediate aftermath of the attack, “people were kind to one another,” but notes that this state of affairs only lasted a very short time.

“We are a nation on edge,” he told Windy City Times. “We only tend to help people in our own siloes, whether community, race, religion, or family, so compassion for the ‘other’ is what’s missing.” Citing the Biblical book of Matthew, he noted that Jesus said, “I was a stranger and you welcomed me,” and marveled that he “got to experience that firsthand.”

And Gander’s amazing generosity was not a one-off, either. Tuerff, who has returned to Gander several times to see friends—both come-from-aways and Newfoundlanders—who share his memory of those remarkable days, recalled being “blown away” when he returned in 2016 and discovered that Gander residents had “adopted” four Syrian refugee families. “It’s following the Golden Rule,” he said, which is the same in every religion in the world but is not always, or even often, followed. When his 9/11 experience was over, the residents of Gander said that thanks were not necessary, that the debt was paid in full. “They say, ‘You would do the same for me,’ but my God no we wouldn’t,” he said—especially not if the incoming strangers included, as they did, many people from African and Arabic countries.

Still, Tuerff continues to try to make a difference. Shortly after his return, he created Pay It Forward 9/11—an organization that asks people, on the anniversary of the attack, to do something nice, “random acts of kindness,” for their fellow man. When he still owned his own business, he gave employees $100 each to distribute in any way possible and then come back and share their stories. He is retired now, but is pleased that the producers of Come From Away have taken up the cause, giving cast and crew members money to give away and discussing it in a talkback after the Sept. 12 performance. With five companies now performing the play in the United States and Australia, Tuerff sees the joy of giving spreading.

“There were 16.000 stories in Gander,” he said, most of which obviously didn’t make it into the play. But the stories that did have enshrined in popular culture the attitude of a people who genuinely care for strangers in their midst. He’s disappointed, though, that we in the United States seem to have forgotten how the world rallied behind us in our day of need. “In the aftermath of 9/11 our country was united, but now it couldn’t be any less united.” He wrote Channel of Peace, its title taken from a Christian hymn, as a statement that individuals can make a difference. It’s the same reason he wears a rope bracelet made for him by a janitor in Gander: “I wear it all the time to remind myself” of what can happen when people actually come together.