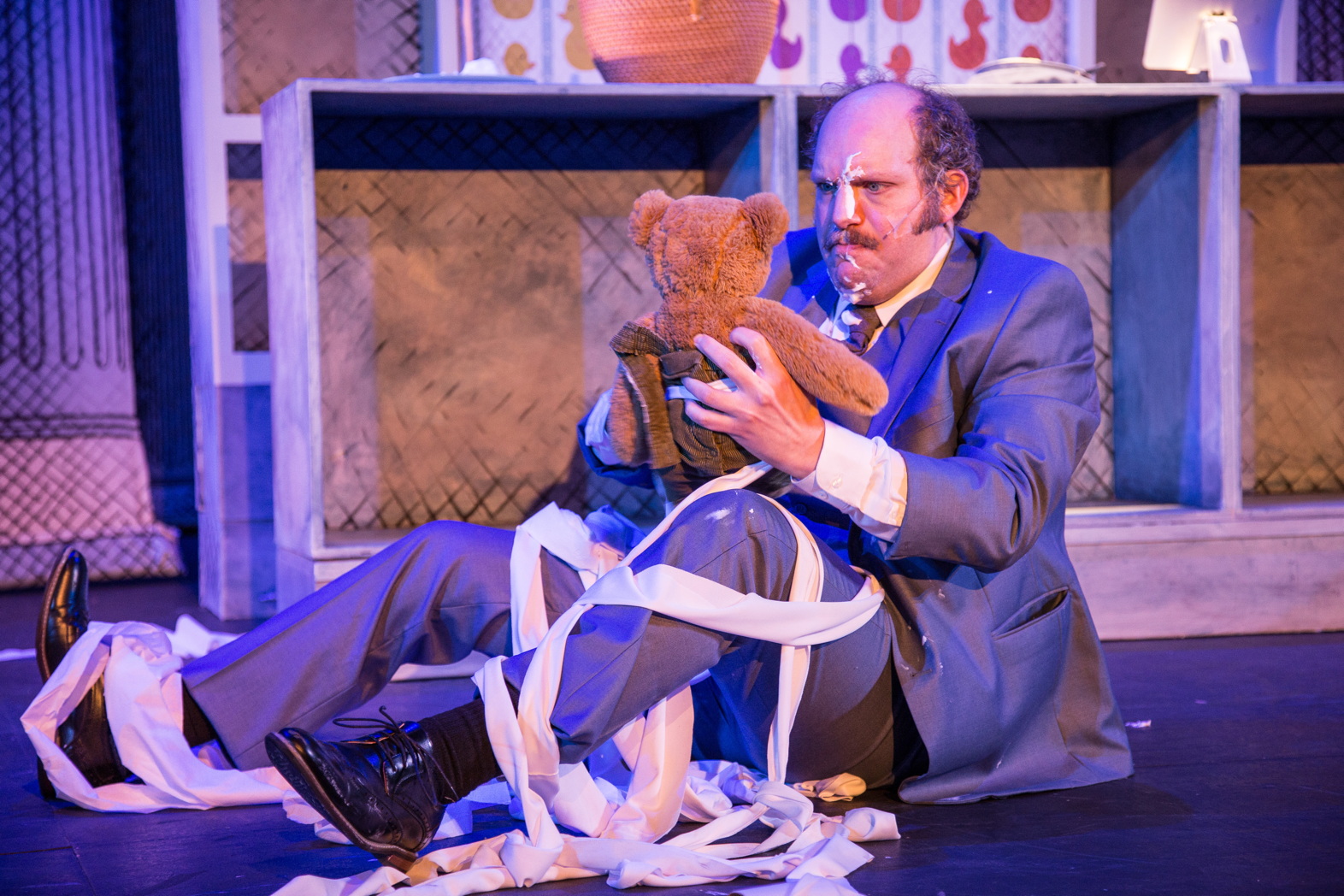 My four year old has been looking forward to seeing Corduroy by the Emerald City Theatre Company since I told him about the show in December. So expectations were high as we walked into the noisy Athenaeum Theatre. It was the perfect space for a children’s show- the look of a big, Broadway theater but scaled down to be child sized. We talked about the stage, the curtain, the boxes and the balcony as we waited for the production to begin. For a new and little theatergoer, this is a great place to start the journey!

As the show began, it struck me that this type of theatrical production is one of the privileges of living in a theater hub. Chicago is a place that attracts all kinds of performers and talent from around the world and it is hard to imagine Corduroy  being produced without the trained circus performers in the cast. Jean Claudio, who played Corduroy, is from Puerto Rico via  Argentina and was fantastic. The only word he utters in the show is “button,” but through movement and expression, we felt connected to poor little (or in this case, big) Corduroy as he searches the department store for his lost button. Using his circus and mime skills, Corduroy has the young audience both fully engrossed and fully laughing as he flips, falls, gets himself stuck in buckets, and travels up and down escalators. The moments with Corduroy onstage as well as his partners in mess making, two clowns played by Averis I. Anderson and Kelsey Shipley are fantastic, entertaining the children and adults alike. In fact, this was the youngest audience of any show I’ve ever attended and also the nosiest. Yet when Corduroy was on stage, the noises of restless children quieted down as we all enjoyed Corduroy’s antics.

Interspersed between the scenes of Corduroy and his friends in the department store, which also included a hapless nightwatchman, humorously played by Matt Miles, are scenes with Lisa and her mother. For those who haven’t read the book Corduroy in some time, Lisa is the little girl who wants to buy Corduroy, despite his lost button, and collects all of her money to purchase him the morning after he has desperately been searching for his button in the store. Tia Pinson,  last seen as a fox child in The Fantastic Mr. Fox, reprises her role as a youngster, playing Lisa. Her energy and enthusiasm as she tries to help her mother around the house in order to earn extra money so she can buy Corduroy is just right and the relationship between Lisa and her mother, played by Michelle Renee Thompson, is believable as tired but loving mother and sweet but at times annoying daughter. While the acting in these scenes was good, my son and I wished for them to be over so we could get back to seeing Corduroy himself more quickly. As has happened at other children’s book adaptations I’ve seen with my sons, my four year old didn’t like that the “play was different from the book.”

Technically, the show was perfect for the young audience. The whimsical look of the background of the department store and the set pieces filling in the different departments mirrored the illustrations of the book which help the young fans feel a part of Corduroy’s world. Not only were we impressed with Jean Claudio’s performance as Corduroy, my son and I both enjoyed the “magic” of how whenever a human discovered Corduroy in the store, he had magically transformed into a small stuffed bear- which I might add were being sold in the lobby after the show and I must admit, came home with us. My son thought this was so amazing that Corduroy could switch between real and pretend without anyone- at least in his mind- even noticing. Tech crew and actors seamlessly moved the set from store to Lisa’s apartment and the sound effects were just the right noise level for my son who was nervous about the potential of loud noises.

Just for the joy of seeing Corduroy’s circus antics, I recommend this show for children (ages 3-6) and their grown-ups. But anyone who enjoys the original book as I always have will enjoy seeing Corduroy live on stage.