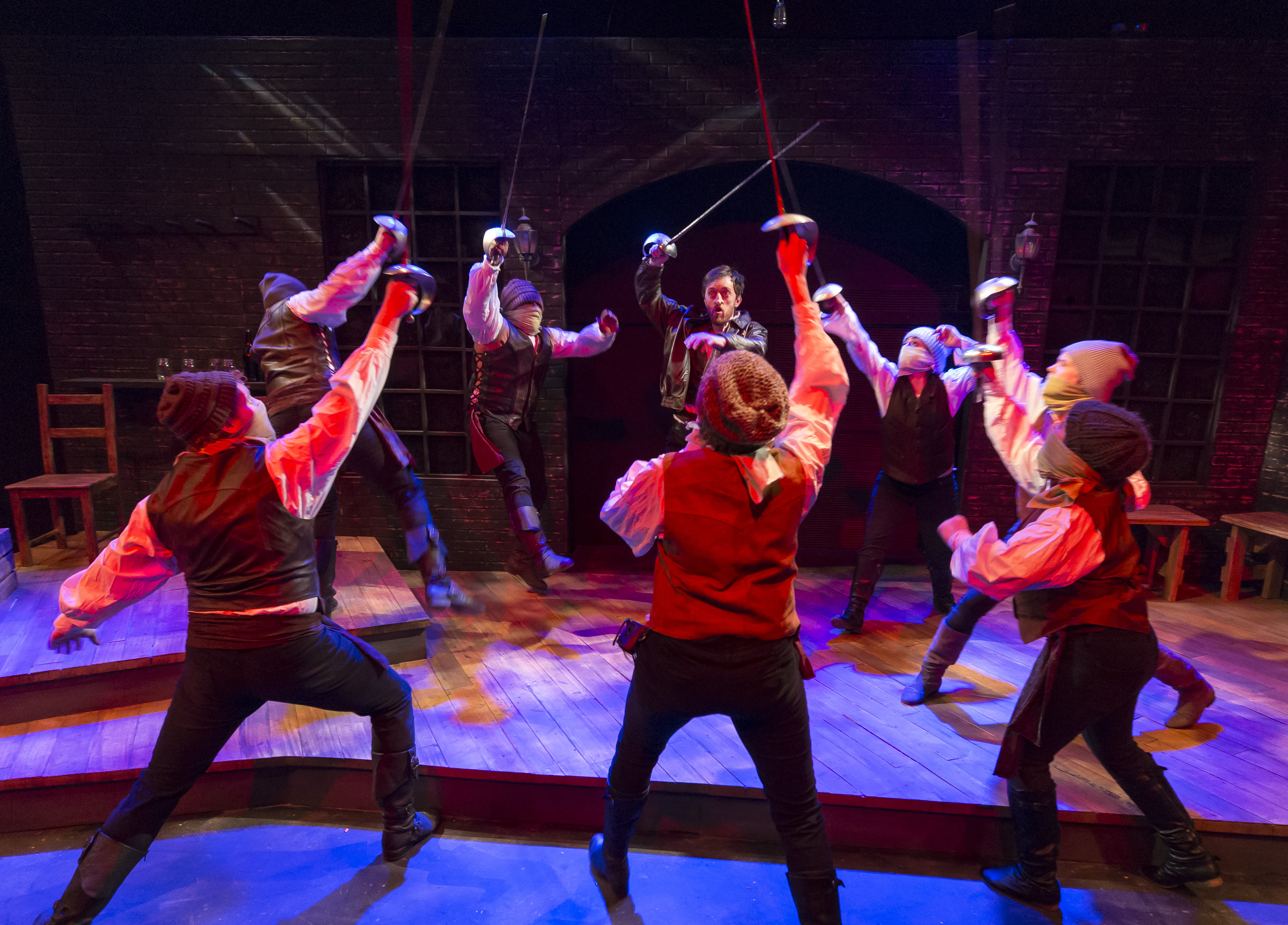 I always find it difficult to begin reviews of very familiar plays. What do you say that has not been said a million times before? And Boho Theatre’s Cyrano, though a new adaptation by Michael Hollinger and Aaron Posner of the Edmond Rostand story, is certainly a familiar work. Who doesn’t know the story of the poet-swordsman with the disfigured nose who finds himself vicariously courting the love of his life by helping another man solidify her affection? It’s been told dozens of times in many different ways including a 1987 movie with Steve Martin. So what sets this version of Cyrano de Bergerac’s tale apart from all of the rest? Why should theatregoers choose to see this old story instead of something new? The answer is simple: this is a brilliant adaptation that removes a lot of the pretension of lesser adaptations while keeping the humor, the brilliant poetry, and the exciting swordplay. And most of all, it gives us a very intimate look at the unrequited lover trying by any means possible to bathe in the affections of his dream woman. 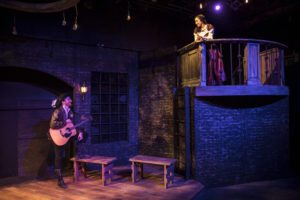 Directed by Steve O’Connell, this Cyrano moves along briskly, a two and a half hour play that seems much shorter. O’Connell has his actors use the entire space of the Theatre Wit house, racing around the audience as well as working on Patrick Ham’s lovely minimalist set. And he also makes the most of the narrative elements of the script, keeping lines bouncing among the performers and finding ways of making even the narration enjoyable and surprising to watch. There is not a dull second in the entire evening. We are told from the beginning that the tiny cast will play many roles each, and that proves to be the case: only one member plays a single role. Women play men and men play women without any element of camp. And Cyrano remains in the center of these seeming multitudes, a solitary man who believes that his sparkling soul is never quite enough to make up for his ugliness. 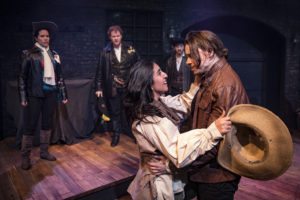 Michael B. Woods plays the title role with all of the melancholy and pleasure that goes along with a man with a dozen good friends who can defeat an opponent (or a hundred) at his will while reciting poetry and yet cannot find fulfillment in his private life. He is not a man who suffers fools gladly (we first see him closing down a theatrical performance by an actor he sees as weak), but he is incapable of seeing (pardon this) past the nose on his face to give his would-be love credit for being more than one-dimensional despite the fact that he knows her to be a devotee of poetry. Vahishta Vadafari plays Roxanne, a woman who is equally capable of falling in love with a man for his good looks as dumping him because he lacks “soul.” Vadafari captures both the innocent joy and the inherent contradictions of her character, sometimes at the same time (as in the balcony scene in which Cyrano pretends to be the man she hopes to love, Christian, played by Zach Livingston, here a bit less simple-minded than in some adaptations).

The leader of the ensemble, Stephen Peebles, also plays Captain LeBret, Cyrano’s good friend and the leader of the Gascon Guard. In both roles, Peebles shines. His LeBret is both understanding and demanding, in the manner of a good leader, and his narrations are alive with nuance and emotion. Also a standout is Matty Robinson as the baker Ragineau, a good friend of Cyrano who happens to make some mean croissants. Robinson’s ingratiating performance also is present as a member of the Guard. Another interesting element here is the casting of two women (Christina Gorman and Kristin Hammargren) as French nobility, which somehow serves to emphasize the pretentious qualities of these arrogant and fancy-dressed men. Both women are strong performers and, though they make no efforts to disguise their femininity, both work well in the male roles. 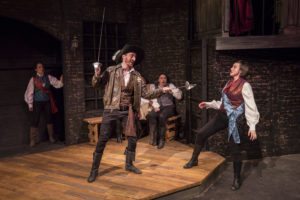 In addition to the set, three other elements of the design deserve special mention. G. “Max” Maxin IV’s lighting is wonderful, setting various moods at different times in the play. Christina Leineke’s costumes are perfect and serve to pinpoint characters’ identities at a glance, important when so few actors are playing so many roles. And, most importantly, the fight choreography by Jon Beal and Kai Young is among the very finest I have seen. Often stage swordplay feels like the illusion that it is, but the fights in this play have the quick, exciting, forceful look of real ones (other than fatal blows, which in any show are always stagey). I was impressed both with the choreography itself and the way it was carried out by the performers, especially Woods and Gorman.

Boho’s Cyrano is a truly wonderful night at the theatre. No matter what you wish to get from a show—laughter, pathos, love, high energy fight scenes, etc.—the play has them in abundance. You will be entertained. This is the play that introduced the world to the word “panache,” and that is a quality the production has in abundance. It’s a swashbuckling good time.