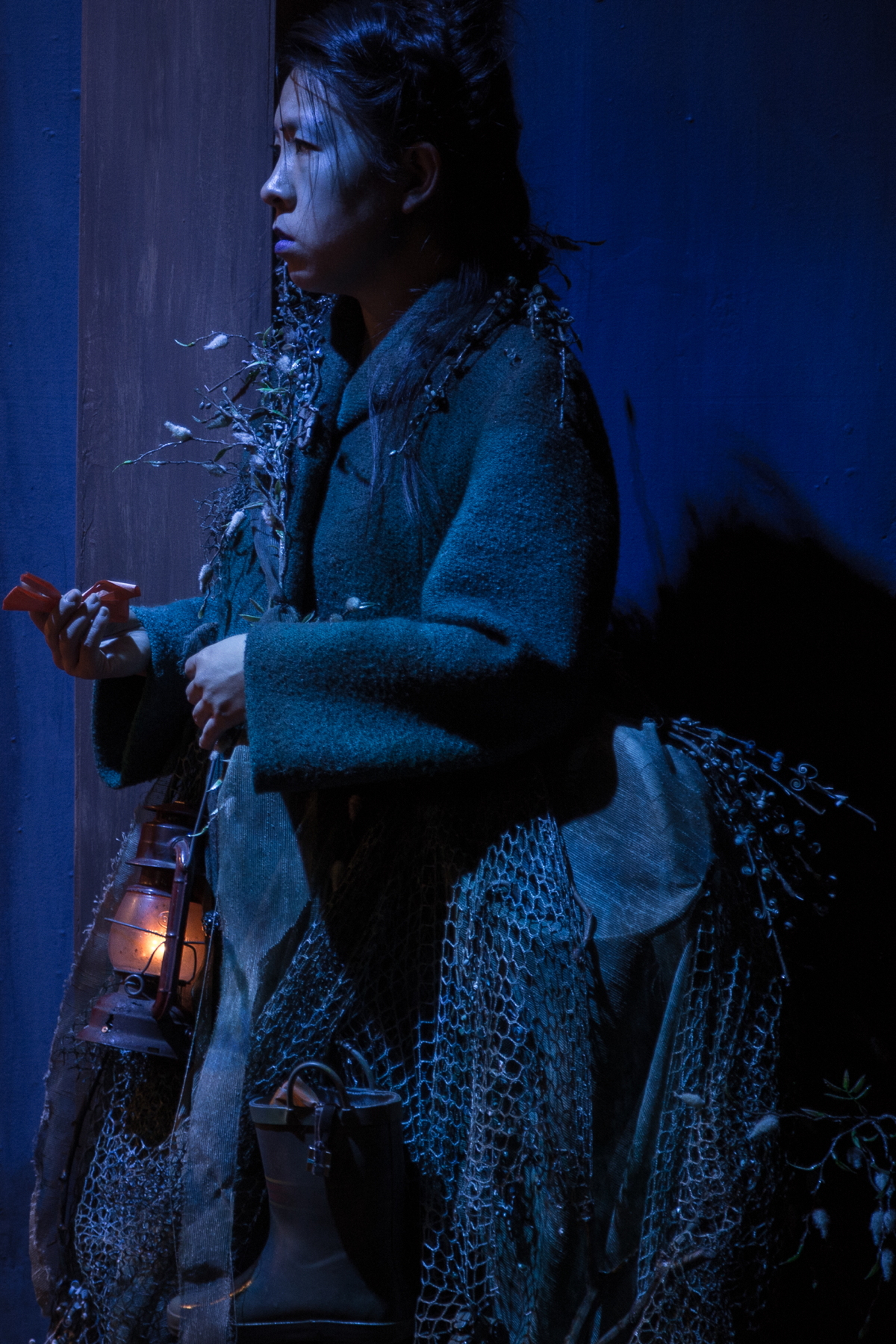 Something mysterious and dark is brewing on the tiny stage of The Frontier, where Cloudgate Theatre is producing its second show, the haunting midwestern gothic noir Strange Heart Beating by Kristin Idaszak. Focusing on the abduction and murder of a small girl in a seemingly idyllic community (and loosely based on a real case from Minnesota in which a boy’s killer lived quietly in his town for nearly three decades after his crime), this play, which ventures into the supernatural and contains a non-human narrator, is not so much interested in seeing justice done for this child as in uncovering the vast human capacity for stubborn blindness and self-deceit that leads to not seeing the darkness right in front of us.

Jyreika Guest, who earlier this year turned in a stellar performance as Hester in Red Tape’s In the Blood, stars as Teeny, the Black sheriff of this very white town whose inhabitants would not think of themselves as racists but who have, from the time her family first moved in, treated them as “other,” even failing to properly investigate the disappearance of her sister when they were children. But when a white girl disappears under similar circumstances, everyone is up in arms. The newly vanished child is the daughter of Lena (Leah Raidt), one of Teeny’s oldest friends, whose struggles with alcohol and an abusive husband are the topics of much town gossip.

The play is poetically narrated by Lake (Stephanie Shum at her ominous best), the personification of the unnamed local lake by which the body is eventually discovered. Clothed in a marvelous costume (by Anna Wooden) that drapes her with many varied blue-green fabrics as well as the detritus that clings to her after being tossed into her domain, Lake has been here forever and knows many things that the humans in the town do not. She also possesses a mystical control over the loons that dive into her depths to fish or to set loose the souls of those who might happen to drown in her. And indeed it is the bizarre activity of those loons in this particular summer that Lena and other residents notice as a sign that something is very wrong.

A fourth character, Ramon, who works at the turkey farm located in the next town but owned by this town’s mayor, is played by Brandon Rodriguez. Ramon, accused of the girl’s murder after basically being in the wrong place at the wrong time, tells a tale of bizarre happenings at the farm and processing plant, where birds are being bred with eight legs and four breasts in order to maximize profit. Many local children, he says, from families of the undocumented Latinos who work at the plant, have vanished with no regard from the authorities, who don’t take such things seriously because, given the status of these families in the community, they simply don’t have to. As Teeny (and later Lena as well) attempt to investigate his reports, they become convinced not only of Ramon’s innocence but of the presence of a malevolent but perfectly human presence in their community.

Director Addie Gorlin keeps all of this perfectly tight, controlled and balanced, no mean feat for a play that features a desperately grieving mother, a massive mystery, and a talking lake spirit who waxes on in Idaszak’s lovely, poetic language about the moon, the birds, and the relationship of man to nature. Angela McIlvain’s simple cut-off set is beautifully lighted by Kaily Story, while Avery Paulson’s sound design creates the loons as well as, with Story’s help,  frightening thunderstorms.

This excellent production work creates the town, but it is the actors who tell the story, Shum’s mystical omnipresence constantly maintaining a contrast to the hyper-emotional responses of Teeny and Lena to what is happening. Both Guest and Raidt are outstanding as two women whose long-standing friendship is being torn asunder while their innocent understanding of the world around them is being challenged. And Rodriguez, almost preternaturally calm for someone facing such a serious charge, adds another layer to the mystery that demands to be solved.

Strange Heart Beating may not, in the end, work for everyone. There are character decisions that are more mysterious than the lake. There is also an ending that might leave you frustrated, but then again it is true to how such things often play out in real life. Dramaturg Tanuja Jagernauth calls this play “not just a beautiful and haunting piece of theatre, but a powerful call to inquiry.” She’s right. And living as we do in a time when more and more darkness is exposed in the world, especially in celebrities and politicians who, in a less volatile time, might have continued in their amoral pursuits without notice, we all owe it to the world to lead that inquiry. Too many people turn too many blind eyes to things that ought to be outrageous. Idaszak’s play reminds us that, if we willfully don’t see what is going on, we are culpable as well.

Strange Heart Beating is a Cloudgate Theatre production now playing at The Frontier, 1106 W. Thorndale, Chicago through July 28. Check the website for specific dates, times, and tickets. Find more information about current plays in our front page recs and at theatreinchicago.com.