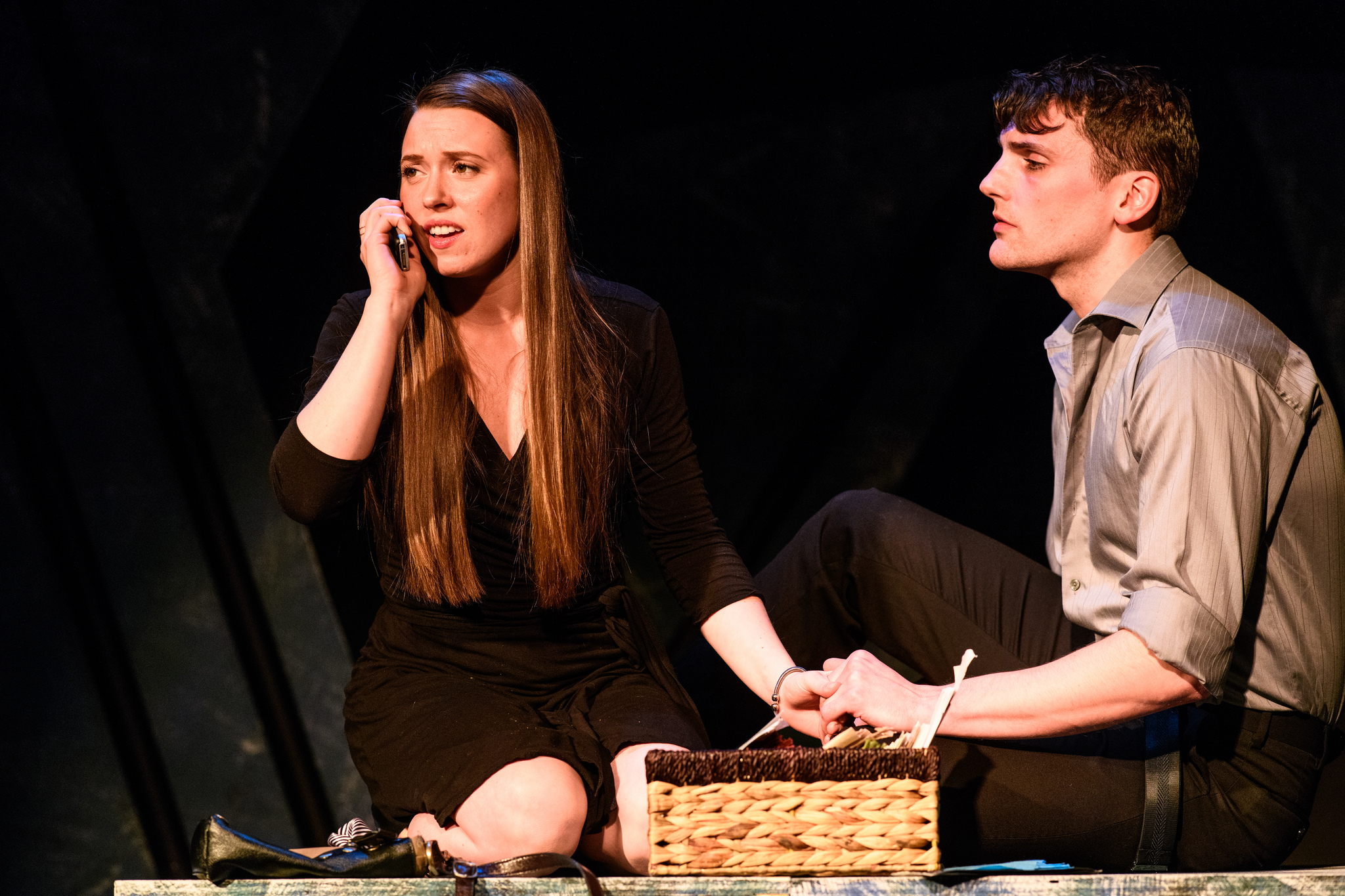 Every theatrical performance begins with those words or something similar, but who hasn’t been in a theatre when, probably at some quiet, crucial moment, someone’s cell phone has gone off? We are left to hang with divided attention: partly to the play as the actors bravely continue and partly to the incessant ringing sounds. (We won’t even talk about someone who would actually answer their phone in a theatre. There is a special place in hell just for them.)

It is the curse of the modern age: cell phones make us accessible everywhere, so people assume they can contact us at any and all times. It is a complaint that Jean, the main character of Dead Man’s Cell Phone, makes clearly:

“I didn’t want to always be there, you know? Like if your phone is on you’re supposed to be there. Sometimes I like to disappear. But it’s like when everyone has their cell phones on, no one is there.”

This odd dichotomy—that cell phones bring us together but at the same time keep us all glued into our own little worlds—is at the core of Sarah Ruhl’s play, now playing in a production by The Comrades at the Greenhouse Theatre Center. Jean (the very likable Cydney Moody) happens to be sitting in a café when she is distracted by a ringing phone nearby. Investigating why the man isn’t simply answering it, she discovers that (you’re way ahead of me on this) he’s dead: sitting calmly in his chair as if watching her, but quite dead. Something compels Jean to answer the ringing phone, thrusting her headlong into the lives of the dead man’s friends and family and imbuing her life suddenly with a new meaning: she is determined to help those who knew him feel better about his death. She finds herself talking to his mother, his brother, his widow, and his mistress and making up confabulations about the nice things he said about each of them before he died. She also finds herself entwined in the less than savory business dealings he had while alive.

Ruhl’s play is a surrealistic and comic piece that follows Jean as the 39-year-old—who apparently has no external life of her own—is suddenly immersed in this new existence. It takes place mostly in what I assume is Chicago (what other city pronounces “Goethe” as “Gothee”?) but which has a scope that includes the whole world…and beyond. Jean’s evolving connections with the world of the dead man (Gordon, played by Bryan Breau) seemingly give her the means to connect to something other than herself. (For a woman who proclaims never to have wanted a cell phone, she becomes attached to this one rather quickly.)

This production is dressed up beautifully in an abstract set by Sydney Achler and some gorgeous original music by Eric Backus, and there is no fault to find in any of the performances (especially not Moody and Caroline Dodge Latta, as the deceased’s mother, Mrs. Gottlieb), yet somehow its extreme elements (which are where most of its humor lies) seem muted. This is a play that lives in the world of the absurd, and though it centers on a death there are many very funny moments that must be mined. Here, the truly awkward dinner in which Jean is invited to Mrs. Gottlieb’s home doesn’t play as funny as it is written. The funeral service (disturbed by a ringing phone, of course) feels serious rather than absurd. Even a scene in the afterlife in which Jean and Gordon meet and talk seems remote. As I write these words it occurs to me that all of this may have been intentional on the part of director Arianna Soloway to emphasize our missed connections—always just missing, like the disembodied voices of cell calls that never reach their destination. It would be a nice conceit, but not at the cost of the laughter that is the beating heart of this piece. The night I saw it, though there were certainly some laughs, most were subdued and many lines that might have been funny fell too flat.

The actors (who also include Lynette Li, Mike Newquist and Valeria Rosero) are good, but too many opportunities are missed. A play about the ways in which we distance ourselves from each other need not feel distant, but more often than not that’s how I felt. Like a cell phone that drops a call, too much here seems to fall into empty space.

Dead Man’s Cell Phone is a production by The Comrades now playing at the Greenhouse Theatre Center, 2257 N. Lincoln, until Mar 10. Check the website for specific dates, times, and tickets. Find more information about current plays in our front page recs and at theatreinchicago.com.