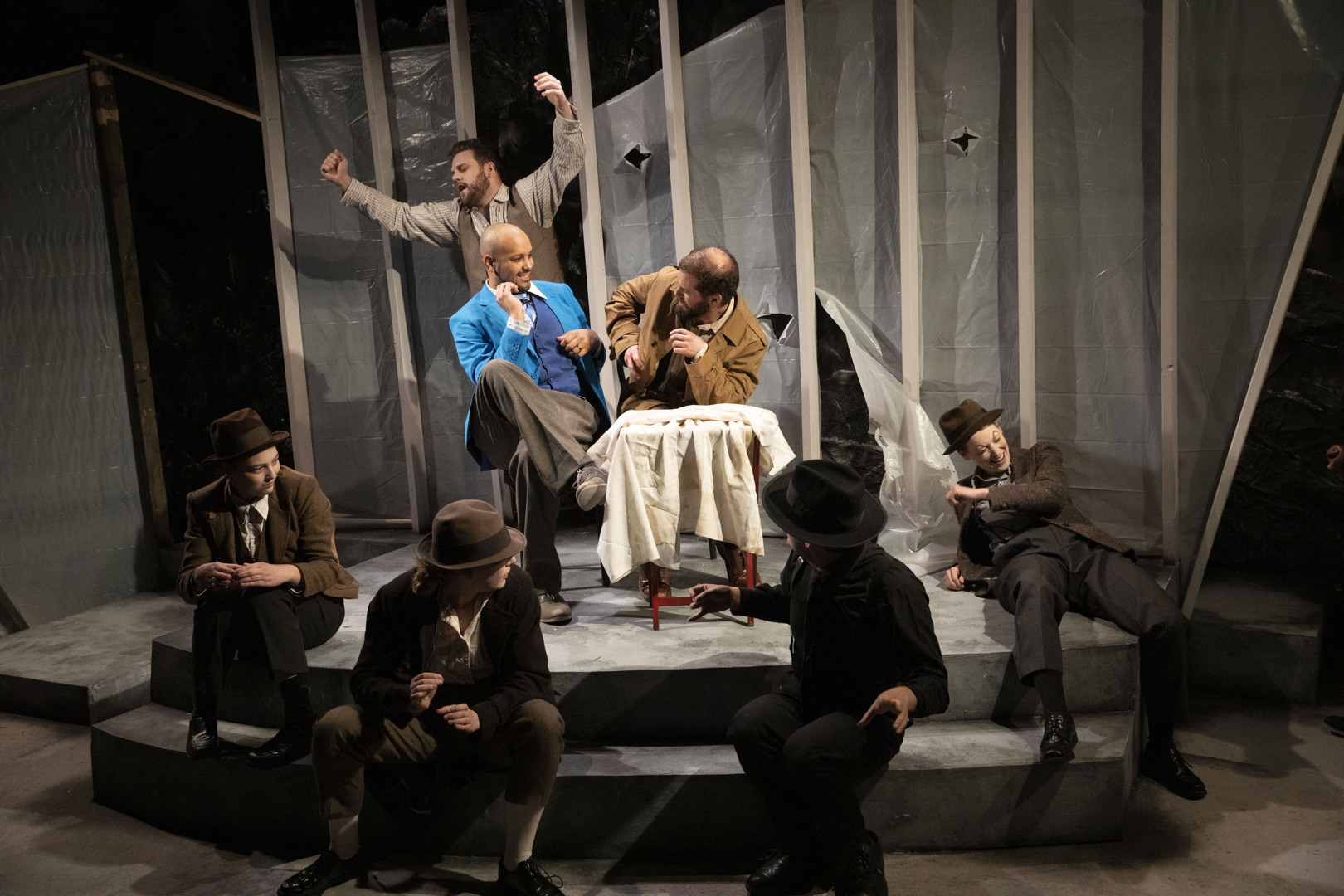 When was the last time two Eugene Ionesco plays were being produced simultaneously in Chicago? With A Red Orchid’s The Killing Game already going strong, Trap Door Theatre—well known for the brand of surrealistic, absurdist, dystopian drama that Ionesco creates—brings us his The Killer. As is usually the case with Ionesco, director Mike Steele amps up the absurdism, this time behind a stunning performance by Dennis Bisto.

Bisto plays Bérenger, a resident of post-WWII Paris and a frequent Ionesco character. For the playwright, the city, having endured occupation and general ill treatment by the Nazis, had lost its lustre: Bérenger’s Paris is dark, cold, rainy and miserable until he stumbles upon a sector of the city he’d never dreamed possible, a “radiant city” within its borders, a place where light and color and beauty somehow manages to exist. There he meets the Architect (Michael Mejia), who tells him that not all is as it seems in the radiant city: a mysterious killer is on the loose, driving its residents out. Before he himself leaves, Bérenger discovers that the killer has struck again, this time claiming a woman who (though they have just met) he believes was destined to be his fiancée.

From there, Bérenger moves through the streets of Paris and into his own chilly apartment, bemoaning his fate, until he meets up with his friend Edouard (the very expressive Kevin Webb), who somehow manages to possess a briefcase full of documents that could identify the killer. From there, the play is a desperate journey back across town toward the radiant city past police blockades, political rallies, and streets full of people going about their repetitive, indifferent lives, as Bérenger tries to get the documents to someone who can stop this evil man.

The Killer plays as a series of set pieces, each showing in its own way the idea that Parisians, through their own inaction or self-interest, are complicit in the rise of this evil in their midst. Everyone knows of the killer. Everyone knows his very specific modus operandi and the single location of his crimes. Yet somehow he keeps killing. Steele shows us a Paris full of people isolated in their own little worlds, moving mechanically, driven only by personal focuses on their own business or philosophy or the weather or whatever, ignoring the darkness in their midst (as Ionesco believed that they acted during the occupation). The politician, Mother Peep (Holly Cerney), speaks of the direction in which she will take the city, but says nary a word about the killer in its heart. The policemen are more interested in directing traffic than in finding him. It seems that the only man who truly cares is Bérenger.

Bisto is amazing in the lead role, expressing his emotions with every inch of his body and cutting through the absurdist chaos in his own single-minded quest to catch the killer. His ebullient joy in discovering the radiant city (and his “fiancée”) is matched by the manic maneuvers he makes in one comic scene in which the briefcase containing the key documents is lost and he becomes convinced that it has to be one of the dozens of black briefcases he sees in the streets. His final lengthy monologue as he confronts the killer is a pleasure to watch: a driven man who initially believes he has an advantage slowly realizing that, in this passionless, isolated Paris in which no one really cares, the advantage is always going to go to evil. Steele’s staging of this entire scene is visually striking.

The Killer is not a simple, easy play, and it’s not for everyone. It is not sweet by any stretch of the imagination, but then with a title like that you wouldn’t expect it to be. It is powerful, sometimes comic, ultimately very dark and relentless in its surreal portrayal of a city that has lost its soul. Ionesco’s message here is sadly applicable to an America that is slowly allowing itself to be consumed by the spreading darkness of our current era. You can build a radiant city or a vibrant democracy, but you have to be willing to fight to maintain it. Indifference just allows the corruption in, and if everyone knows of the evil but does nothing about it, it will flourish.

The Killer is now playing at the Trap Door Theatre, 1655 W. Cortland, Chicago through July 6. Check the website for specific dates, times, and tickets. Find more information about current plays in our front page recs and at theatreinchicago.com.