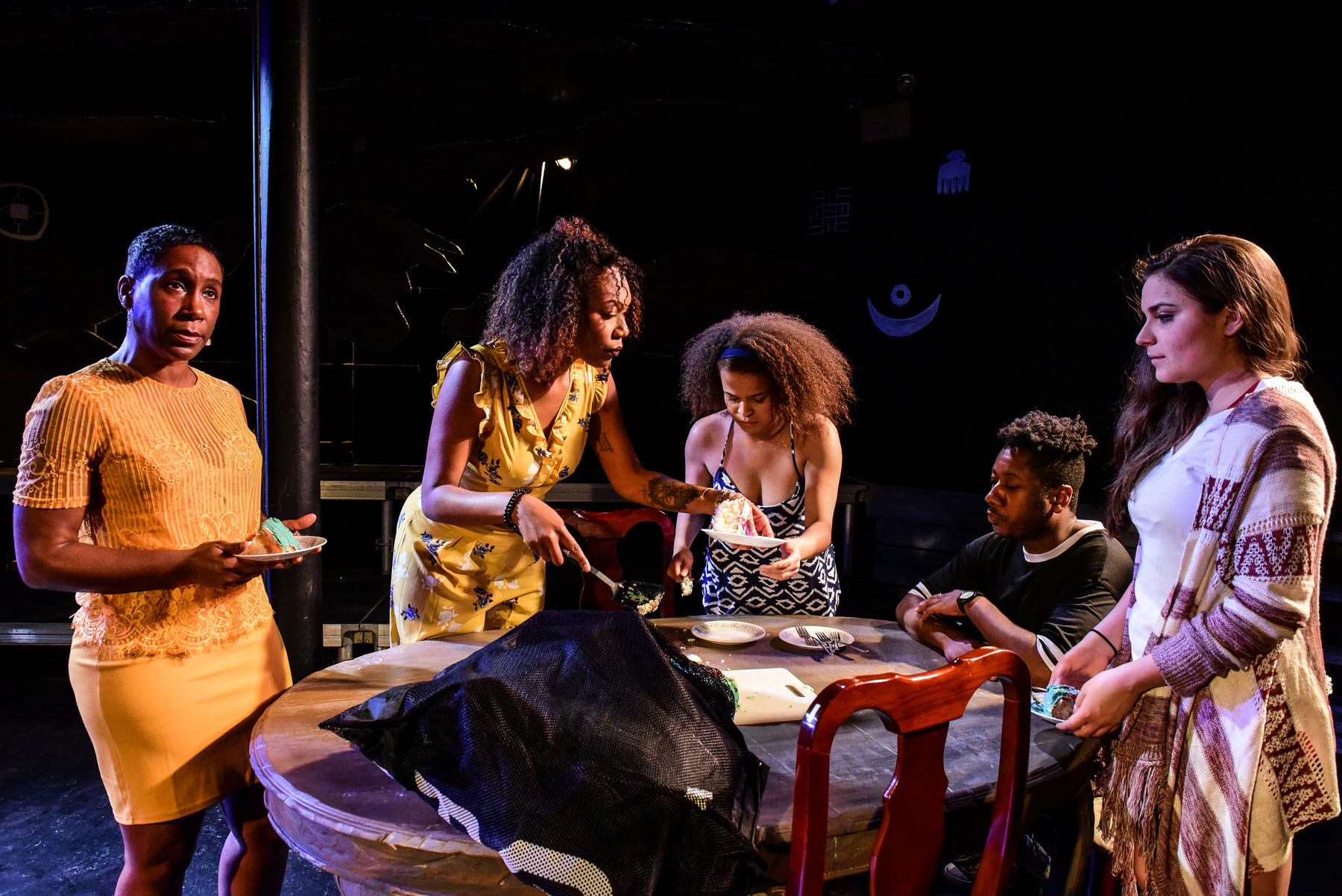 Let’s say we’re having a drink together and you ask, “What did you do last weekend?”

And I say, “I went to see Dontrell, Who Kissed the Sea at the First Floor Theater.”

Now, some might say, “Well, the plot didn’t always line up, and the way it played with conventions left me wondering, at times, what the hell was going on, and there were a couple of leaps that were tough to take, and a few points where the story just wasn’t believable.” This wouldn’t be wrong–not exactly–and I suppose there’s merit to this sort of criticism, but that’s not what I would tell you. 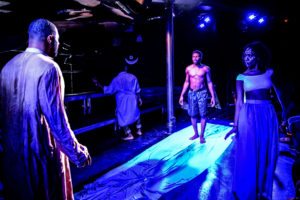 Because, even though that’s all true, that’s not the Truth. The Truth is… Nathan Alan Davis’s Dontrell, Who Kissed the Sea is a fearless, poetic, important, insightful, beautiful, super-brave, work of art–not to mention it’s magical realism at its finest. The Truth is… If you are willing, for about an hour and a half, to give yourself up to the vision of a rhythmically soulful hero journey with a, by turns, hopelessly dorky, absolutely sincere boy in a Wu-Tang t-shirt gliding, crashing and sometimes dancing through the turmoil, possibilities, and joy of family life, friendship, love, and self-discovery… you’re really gonna like this play.

From the moment Dontrell, played by the extraordinarily talented and compelling Jalen Gilbert, wakes from his haunting dream and takes out his “mini-cassette” recorder to begin chronicling his story for “future generations” I was hooked. Every element of Dontrell’s “Hero Journey”–from Eleanor Kahn’s remarkably stark, utilitarian set design, to Rachel Levy’s often ghostly, at times intimate, somehow undersea lighting, to Breon Arzell’s creative, strangely moving choreography–encircles, envelops and swallows the audience. With characters moving fluidly from action in front to a chorus of ancestors behind, the components coalesce and we travel with Dontrell in a theatrical experience that calls to mind Joseph Campbell’s “Belly of the Whale.” Or, in this case, a slave ship–as exemplified by the only prominent set piece, a haunting wooden bench about the height and length of those on which millions of African Americans were chained and carried across the Atlantic on the Middle Passage.

Davis’s Dontrell is a young black man on the verge of achieving the teenage, post-high school American dream. Bound for Johns Hopkins in the Fall, he is a straight A, all AP, bright and shining high school student whose star is on the rise. He loves Star Trek, hip-hop culture, and his family… But then comes his dream. Shaken and energized by the vision of his ancestors in the sea, Dontrell begins his journey with the epiphany that he needs to learn how to swim, so he heads to the aquarium to ask his cousin Shea for scuba gear. 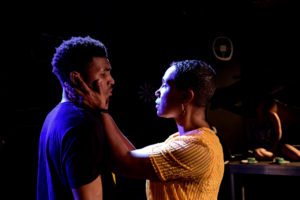 At this point, it must be made clear if you are looking for a realistic portrait of the black experience, this play isn’t gonna do it for you. But, here’s the thing: it is real because it feels real. In every conceivable way, Dontrell’s story feels like a realistic portrayal of what it means to be a young, black man in America. This, by the way, is no small feat. To pull it off, Nathan Alan Davis wrote a sharp and, at times, death-defyingly brave script, and Chika Ike tapped every drop of the considerable talent and energy she and her cast could bring to bear. Although a blow by blow account of the play could never do Davis and Ike’s vision justice, it should suffice to say the inspired dialogue, soliloquies, and plot points rocket along with a series of brilliantly riveting and often moving moments between Dontrell and his friend Robby (Jerome Beck), his cousin Shea (Brianna Buckley) and his sister Danielle (Destiny Strothers). Beck, Buckley, and Strothers form an ensemble of family turned ancestors, continually infusing the play with humor and a dreamlike quality that pulses alongside the key stops on the journey.

At a pivotal moment when Dontrell seems doomed to alienate his family and fall into inescapable teen angst, his father, played by Brian Nelson, emerges from the depths of righteous solitude to deliver a healthy dose of wisdom in a sermon laced with rage and truth to right his son’s path, and then he gives Dontrell his grandfather’s shoes so he can fulfill his destiny. As Dontrell’s swim coach turned girlfriend Erika, Kayle Raelle Holder’s deft pivot from anxious millennial lifeguard to Viking warrior princess–told you it was going to be tough to describe–is, all at once, believable and beautiful. But, above all, Shariba William’s is brilliant as Dontrell’s mother–the living embodiment of his metaphorical sea. In William’s deep and utterly soulful performance, she is, at once, the carrier of her son’s anxiety, possibility, and dreams.

Dontrell Who Kissed the Sea, presented by First Floor Theatre, is now playing at the Den, 1022 N. Milwaukee Ave. in Chicago, until March 31. Performance times vary; check website. Tickets are available from the Den Theatre. Find more information about current plays on our Current Shows page and at theatreinchicago.com.