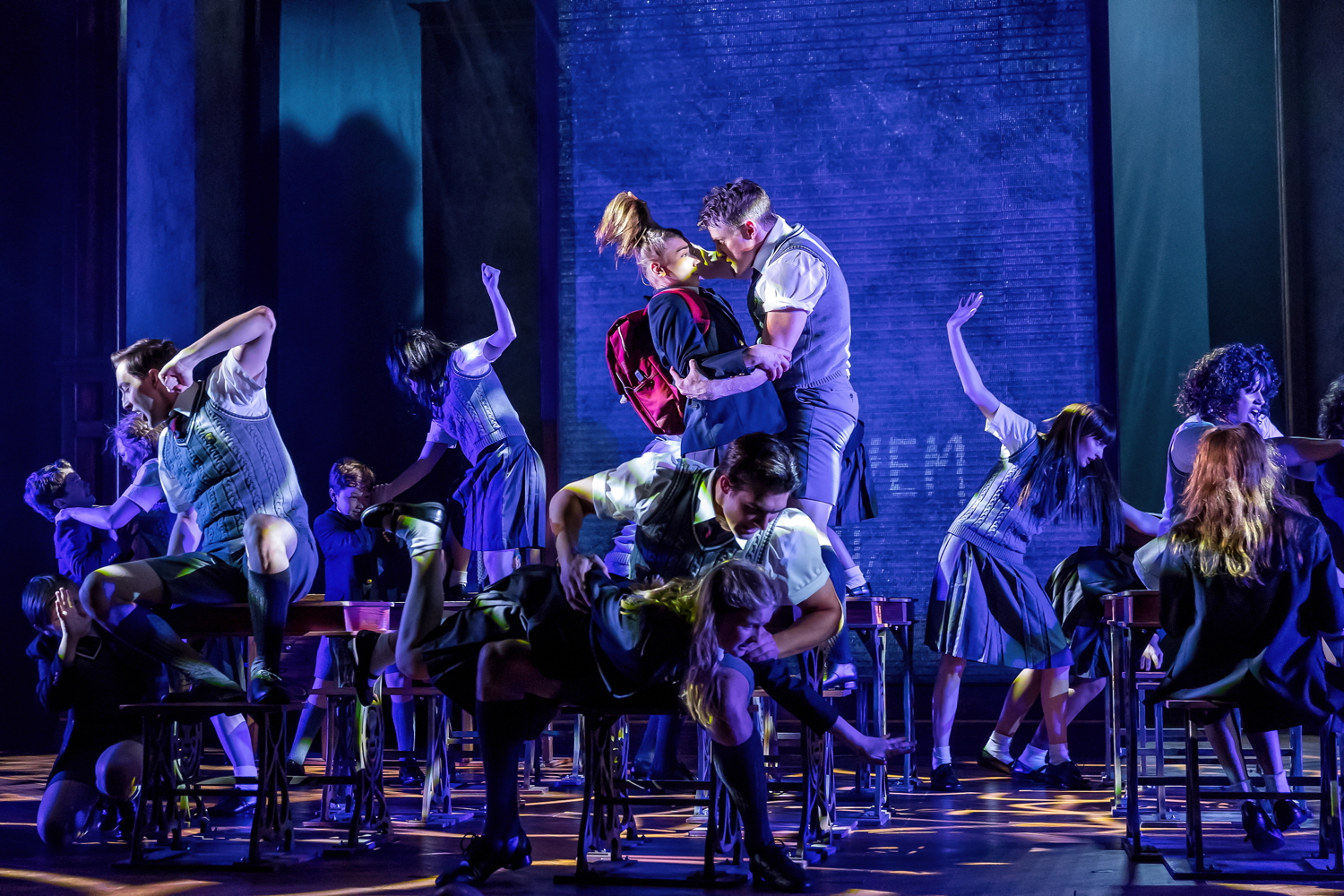 Life can be very scary when you are a child. Everything around you is so big and potentially terrifying that you cling onto the elements of life in which you feel secure: home, because parents are supposed to be the safe zone, and friends, because they are experiencing the same things you are. Not all children’s lives, unfortunately, lend themselves to such simple solutions for fear. And when you happen to be living in a world created by master of childhood nightmares Roald Dahl, you can be sure that the horrors of daily life will be magnified and the resolutions more difficult to find.

Matilda, though, whether the book or the musical, despite the exaggerated problems faced by its protagonist, has always been about empowerment. Its plot, revolving as it does around an intellectually gifted (and telekinetic) little girl; the shallow, much less than intelligent parents who find her habits (like reading books) annoying; and a school run by a truly evil headmistress who enjoys punishing and “breaking” students and doesn’t really believe in educating them, is more or less an open invitation for Matilda to “change her story” and make things right…if she can. And the joy of watching the musical (in addition to the fun songs by Tim Minchin) lies in watching her do just that. To further the focus on empowerment, the story’s subplot is about a dedicated teacher so broken by life as to consider herself “pathetic” learning to stand up for herself (and for Matilda).  Take these two stories together and Dennis Kelly’s book neatly packages the possibility of overcoming even the darkest of situations.

Director/choreographer Mitch Sebastian sets up some great, energetic dance sequences, especially in the phys ed scene (in which Sean Fortunato’s singularly nasty Mrs. Trunchbull goes out of her way to punish her charges for imaginary wrongs by exercising them to the point of breakdown, an exaggerated view of every gym-hating child’s worst nightmare), the wonderful “Revolting Children,” and Matilda’s mother’s comical dance number “Loud.” The exuberant opening number, “Miracle,” in which all of the children celebrate being the apple of their parents’ eyes (which immediately sets them apart from Matilda) is also a joy. In his role as director, though, Sebastian is guilty of overplaying the “macabre” card. Granted, this is a Dahl story, so it tends that way, but Sebastian uses his adult ensemble to populate many scenes with men and women in Victorian black mostly standing as still as statues and providing a darker background to what is already a pretty dark piece. In the “story” scenes, playing out Matilda’s ongoing story about an acrobat and an escapologist, these people seem especially ill-placed: they are supposed to be the crowd that is jubilantly gathering for a daredevil stunt, but they look more like the last remnants of a particularly dreary and depressing funeral. It’s a device that is probably meant to visualize the darker corners of Matilda’s mind, but it is misguided and overplayed, not to mention unnecessary: with Trunchbull around, darkness pretty much takes care of itself.

Fortunately, Sebastian is blessed with a cast that is capable of pulling us back into the story. Drury Lane’s production has a very talented cast from top to bottom. Matilda herself (played on different nights by Audrey Edwards and Natalie Galla, the former of whom I saw on opening night) is wonderful. Edwards is such a natural performer that, whenever the focus is on her, the show zings. She is utterly engaging whether singing the show’s signature number “Naughty” or telling the sad and poignant tale she weaves to entertain her librarian Mrs. Phelps (Linda Bright Clay). Stephanie Gibson and Jackson Evans as Matilda’s parents, the Wormwoods, have a grand time chewing up the stage in the more comic aspect of Matilda’s horrible life. Fortunato makes such a menacing villain that you can easily believe how over the top Trunchbull goes with her imaginative punishments. And Eben K. Logan as Miss Honey, with her beautiful singing voice, comes across as perfectly sincere and genuine: along with Mrs. Phelps, the only adults Matilda has in her life who see her as she is. (Mr. Wormwood, for instance, is so myopic and dense that he continually addresses her as “Boy.”) Both the children’s and adults’ choruses are tremendously talented as well.

Miss Honey, of course, is the secondary character who learns to become empowered in the show. Her salvation is entirely the doing of the superpowers of Matilda, but songs such as “My House,” her paean to the tiny shack she calls home, show her capability to roll with the punches life throws at her. It would be nice if Logan allowed a bit more gradual growth in the character, who seems to come into her own pretty much all at once. (Perhaps Sebastian instructed her to play Honey this way?) If she had, Honey might be a more worthy candidate for the person who is, basically, Matilda’s deliverance. As it is, we are left to hope that Miss Honey’s sincerity and Matilda’s strengths will fuse to create a strong future for both of them.

Still, because of the stellar cast and the solid book and music, Matilda is enjoyable even though you might sit there wishing that Sebastian had just left the material alone.

Matilda the Musical is now playing at the Drury Lane Theatre, 100 Drury Lane, Oakbrook Terrace, through June 23. Check the website for specific dates, times, and tickets. Find more information about current plays in our front page recs and at theatreinchicago.com.