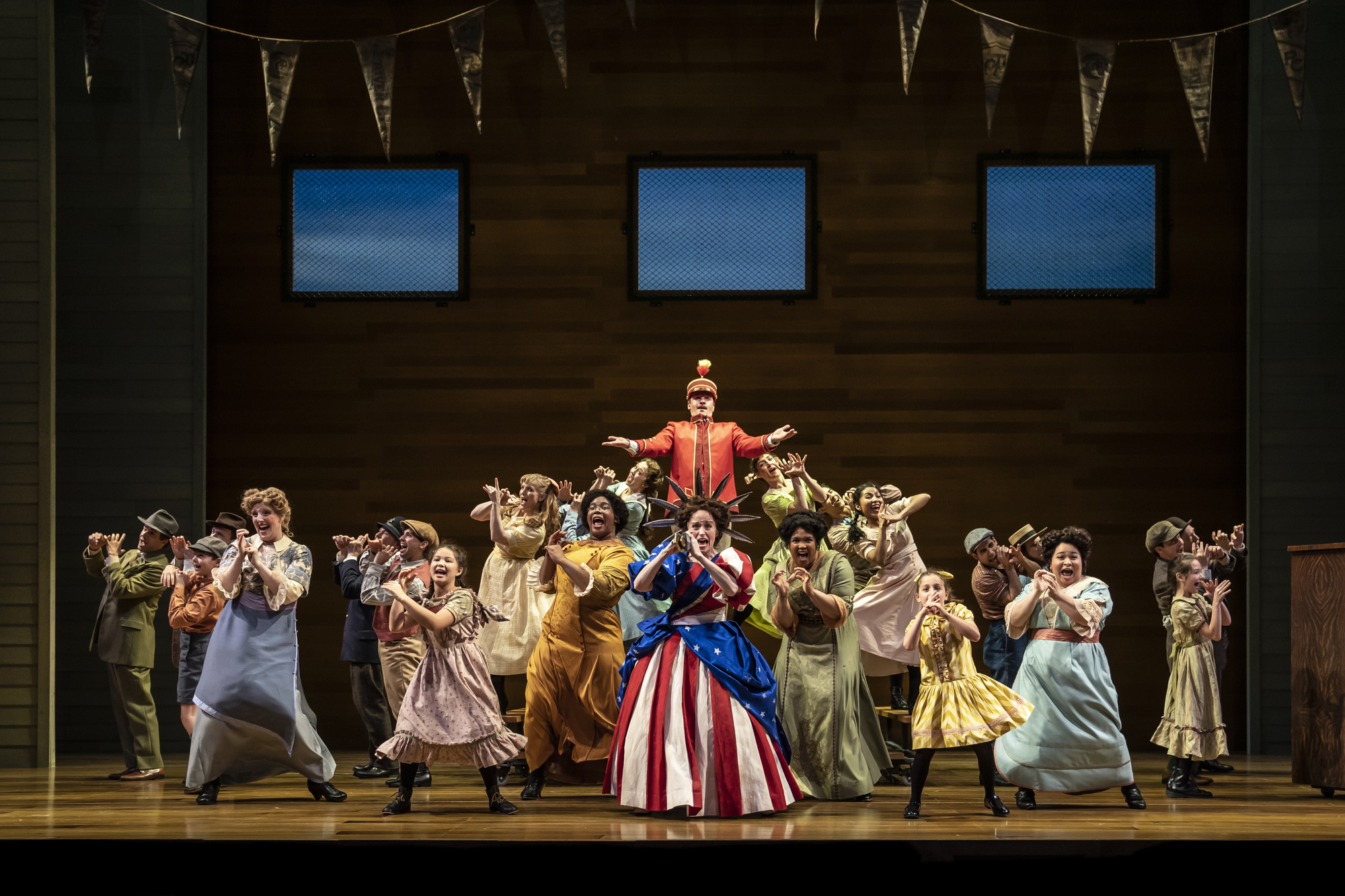 More than Oklahoma, I have always felt that Meredith Willson’s The Music Man is the quintessential American musical. This bright, energetic, and silly romantic comedy about a slick-talking traveling salesman/con man and the Iowa town he seeks to bamboozle contains so many indelible characters and memorable songs that it’s easy to forgive it for beating West Side Story for the Tony Award. The musical is America right to the heart, from its “stubborn” Iowa citizens to the machinations of Harold Hill to the Irish immigrant family that produces Marian Paroo, the overly cautious and stuck up librarian who ultimately captures the heart of the con man. In the Goodman Theatre’s revival of this classic, innovative director Mary Zimmerman puts her mark on Willson’s enjoyable story, based on his childhood in Mason City, Iowa, and his multitude of winning songs. The result is a bit of a mixed bag: a Music Man that often sparkles with imaginative wit while never quite coming together as a romance.

Zimmerman starts on a high with the pretty much perfect staging of “Rock Island,” the train-based tribute to traveling salesmen and our introduction to Professor Harold Hill. As is traditionally the case, Hill (Geoff Packard) spends most of the opening scene hidden in plain sight while the other salesmen prattle on, complaining about the frustrating changes that progress is bringing to their profession, until someone brings him up as an example of a man who succeeds even though “he doesn’t know the territory.” Others scoff. Sensing a challenge, Hill decides on the spur of the moment to try his luck in River City, and Daniel Ostling’s set splits and opens into a huge main street where Hill shows up to do his thing.

Packard shows himself to be adept at playing the con man both in his fast-talking banter like “Ya Got Trouble,” which is designed to confuse and engage his audience, and in the more sly and smarmy way he tries to worm his way into the affections of the local piano teacher, Marian (Monica West) in her library, having picked up a rumor from the gossipy ladies of the town that she might be open to his advances. For her part, West is strongest in these early scenes when she gladly rebuffs the salesman. In an early scene with her mother (Mary Ernster, whose big personality and Irish brogue steal every scene in which she takes part), Marian declares that she has “standards” for men that this “masher” could not possibly live up to. And she is right: Hill is playing her as she plays the piano, sucking up to the only person in town who might easily see through his ruse of being a music expert selling them on the opportunity to create a boys’ band.

As long as this dynamic is maintained, the show sails along smoothly. There are wonderful comic turns by Ron E. Rains as the pompous town mayor who thinks there is something suspect about the “professor” and Heidi Kettenring as his wife Eulalie, a wannabe society matron. There is also a bellicose group of school board members whom Hill forms into a harmonious barbershop quartet as well as Eulalie’s women’s group, who are planning a ridiculous dance routine for a town celebration. There is the town’s infatuation with the idea of that band. There is lovely singing and lively dancing, including that provided by the great Jonathan Butler-Duplessis as Marcellus. And there is Marian, very suspicious about Hill and his “think method” of musical instruction (just think about the music and you can play it!), who uses her library to research into the Professor’s purported past.

It’s actually at a key turning point that the show slips in its footing for the first time. Marian’s little brother Winthrop (Carter Graf), horrendously shy due to a pronounced lisp, has slowly begun to come out of his shell around the band leader. Jubilant about the prospect of the Wells Fargo wagon arriving with the instruments, he happily and unreservedly joins in a musical reverie with the townspeople, singing his own verse replete with the S sounds that scare him so much. Seeing his excitement, Marion suddenly decides against sharing with the mayor the damning evidence against Hill that her research has turned up. But there is nothing in the staging to focus us on the librarian as she comes to this life-changing decision. We are entirely focused on Winthrop, and when we return to Marian the whole thing is a fait accompli. We needed to watch her watching him in order for it to work fully.

It’s in this somewhat casual approach to the fundamental relationship between Hill and Marian that the show falters. In the second act there are several scenes designed to forge a real bond—maybe blossoming love?—between the two, but not enough attention is paid by either the actors or the director to building this relationship. In the end, when Hill decides to stay in town despite having been found out, risking tar and feathers because, as he puts it, “For the first time in my life I got my foot caught in the door,” there just has not been enough in the way of sparks to justify his decision.

None of this is to say that the play is not worth seeing. It definitely is. The entire ensemble is strong, the songs are well done, the comedy is rich, Jermaine Hill’s orchestra is lovely, and Denis Jones’s choreography is imaginative and enjoyable. Other than the central relationship, Zimmerman has done almost everything right here. And the truth is that, more so than in most musicals, that relationship is not entirely critical. Yes, of course it should be the heart of the show, but the real relationship being crafted here is between Hill and the citizens of the town of River City. His scheme changes them in permanent ways as it melts the hard heart of Marion and brings joy and vivacity to the terminally shy Winthrop. It even manages to change him. That’s still a lot to accomplish even if it falls short of fairy tale love.

The Music Man is now playing at the Goodman Theatre, 170 N. Dearborn, Chicago through August 18. Check the website for specific dates, times, and tickets. Find more information about current plays in our front page recs and at theatreinchicago.com.