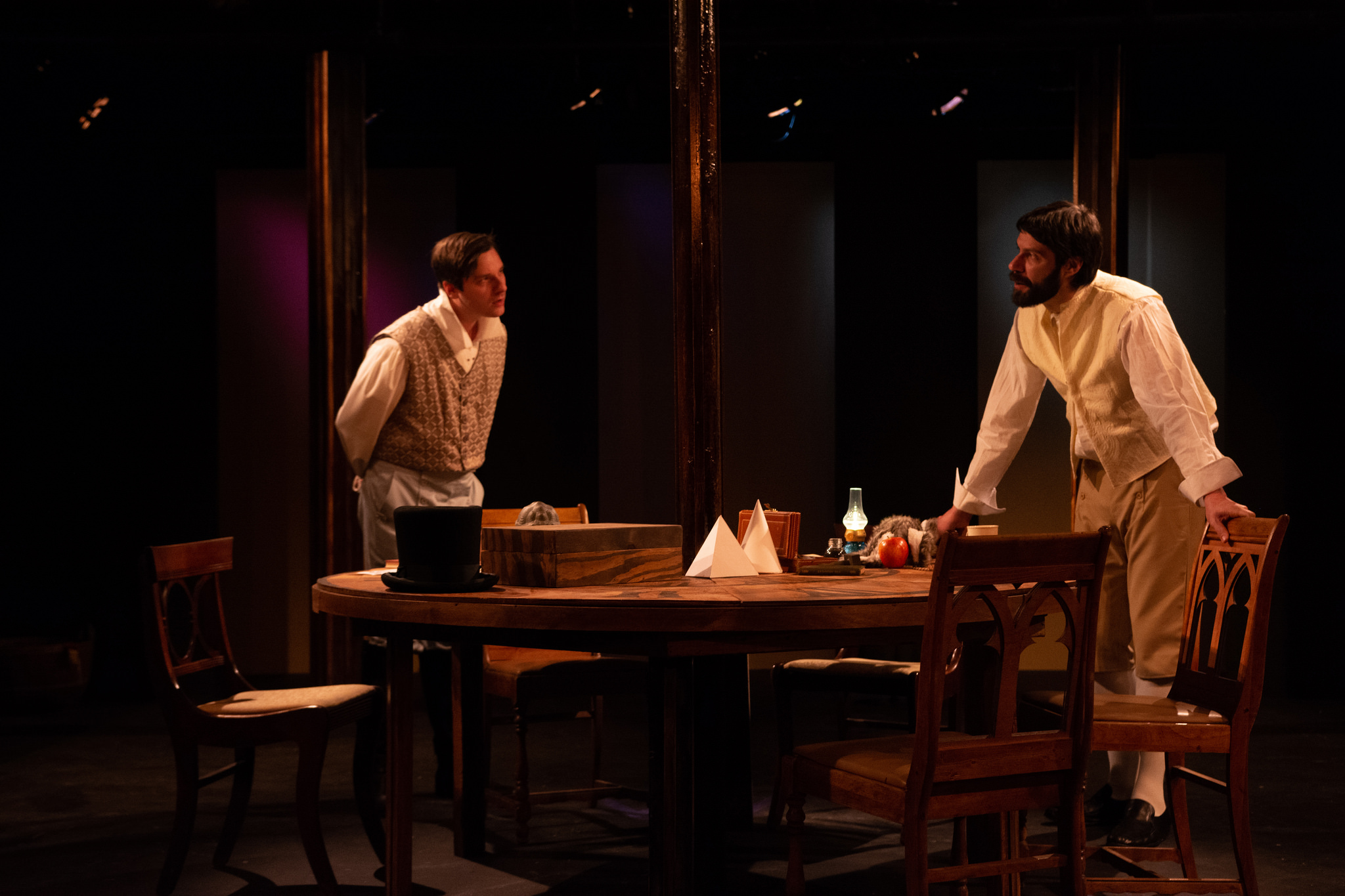 Drifting back and forth between a brilliant modern mystery about the nature of truth and a razor sharp 19th century costume drama of human frailty and farce, echoing between the wit of lightning-quick wordplay and the soft whisper of tragic heartbreak, beating in the part of the heart between platonic love and the lure of eros, flickering between the flame of genius and the raging fire of ambition, in the space between order and chaos lies Tom Stoppard’s masterpiece, Arcadia.

In April 1993, Arcadia opened at London’s Royal National Theatre to widespread critical acclaim. Stoppard’s play of love and ideas moved The Daily Telegraph’s critic to comment "I have never left a play more convinced that I had just witnessed a masterpiece". Vincent Canby of The New York Times described it as "Tom Stoppard's richest, most ravishing comedy to date, a play of wit, intellect, language, brio and, new for him, emotion". In short order, the debate began as to whether or not Arcadia was the greatest play of its time.

Twenty-five years later, with Stoppard’s reputation for intellectually intoxicating, ultra-clever, often poignant, and at times deeply moving theater cemented by his The Coast of Utopia, The Real Thing, and The Invention of Love--not to mention Shakespeare in Love and a litany of critically acclaimed works for both the stage and screen--the Promethean Theatre Ensemble has produced a nearly perfect love letter to his genius with its production of Arcadia at the Greenhouse Theater Center.

Under the direction of Ted Hoerl, whose production remains utterly faithful to the playwright’s vision, the Promethean’s ensemble cast delivers Stoppard’s two-act, three-hour, intellectual tour de force with extraordinary talent, precision, energy, and reverence. Kevin Hagan’s functional, smart set--a re-creation of a room off the garden at Sibley Park, an English manor in Derbyshire--serves as the perfect backdrop for Stoppard’s cerebral script. And, with the daunting task of delivering the playwright’s brilliant dialogue at a breakneck pace amidst an incredible juxtaposition of ideas, the Promethean ensemble proves more than up to the challenge.

From the first lines of the play to its tender final waltz at the end of the last scene, Stoppard fires off an impossible set of dichotomies to drive the action. Chief among these is the tension between classical reason and emotional romanticism. At the large hexagonal table in the middle of the room, thirteen-year-old Thomasina Coverly lights the fuse for Stoppard’s explosion of ideas with a hopelessly innocent question for her tutor. “Septimus, what is carnal embrace?” And, with this question, the two begin a back and forth that serves as the principal relationship in the play.

In her role as Thomasina, Meghann Tabor is, at once, sweet and sharp, brilliant and sincere, hopeful and wise, and her chemistry with Septimus, played by Chris Woolsey, is both natural and engaging. While Tabor perfectly conveys Thomasina’s goodness and genius, Woolsey plumbs the depths of Septimus’s complexity and delivers a deep and rich performance.

Though innocent, Thomasina, as it turns out, is a true genius with a yet to be fully recognized penchant for positing mathematical breakthroughs that will not be formally discovered for at least another hundred years. In the same sweet tone she uses to ask about “carnal embrace,” Thomasina drops in a key insight on Fermat’s Last Theorem, then skips back to Sibley Park gossip, before tossing out a brilliant example of determinism. “When you stir your rice pudding, Septimus, the spoonful of jam spreads itself round making red trails like the picture of a meteor in my astronomical atlas. But if you stir backwards, the jam will not come together again. Indeed, the pudding does not notice and continues to turn pink just as before. Do you think this is odd?”

In a litany of strong performances, Megan DeLay’s Lady Croom is, by turns, forceful and funny, as she tries to bring order to the chaos at Sibley Park, while also sensual and vulnerable, as she later pursues an affair with Septimus. Michael Reyes also stands out as the vain and befuddled pseudo-poet Ezra Chater, who confronts Septimus and challenges him to a duel over his alleged “carnal embrace” with his wife. A note about this proposed duel will turn out to be important later in the play when it is discovered almost two hundred years later in a copy of Chater’s terrible book of poetry “The Couch of Eros” and falls into the hands Bernard Nightingale, an academic with an insatiable drive for literary fame.

In the second scene, now set in the present, Hannah Jarvis's research on the “Hermit of Sibley Park”--a mysterious figure who spent years living in the garden’s hermitage piling up page after page of apocalyptic equations--is interrupted by Nightingale, a Lord Byron scholar on the hunt for a story about a lost period in the Romantic poet’s life that seems to have begun when he visited the Derbyshire manor. In her role as Hannah, Cameron Feagin beautifully captures the inner struggle of a researcher who believes deeply in the value of truth but is, by no means, immune to the longing for recognition. Scot West, on the other hand, brilliantly conveys Bernard’s deeply held belief in the value of recognition, even though he proves, by no means, to be immune to the truth.

In their quest for renown, Hannah and Bernard are helped along by Valentine (Brendan Hutt), Chloe (Heather Kae Smith), and Gus (Michael Brigance), the distant descendants of Thomasina and Lady Croom. Though Gus, who is described as a genius, doesn’t speak through the show, Brigance quietly plays an essential role, delivering valuable moments through his facial expressions and movement. Smith’s Chloe beautifully blends youthful flirtation with genuine insight, while Hutt shines as Valentine, a graduate student in mathematics who makes use of the meticulously kept game books at Sibley Park to predict grouse populations on the manor’s surrounding grounds. Valentine also plays an essential role by uncovering and explaining Thomasina’s genius after Hannah discovers the primer where she described her ideas. "I, Thomasina Coverly, have found a truly wonderful method whereby all the forms of nature must give up their numerical secrets and draw themselves through number alone." In this inscription and the equations that follow, Valentine explains that if you can sort out the “noise” in nature you can discover the iterated algorithms at the heart of Determinism and Chaos mathematics.

With Valentine’s insight, the play begins to change. At first slowly, almost imperceptibly, witty banter gives way to honest humanity, and, as an expression of Thomasina’s ideas, farce gives way to further insight. In one of the most memorable moments in the play, West’s Bernard, believing he has made an important discovery about Byron, delivers an eviscerating--and more than a little horrifying--attack on the value of science, which he then follows up with an absolutely compelling defense of romantic poetry, quoting Byron’s She Walks in Beauty… “She walks in beauty, like the night, of cloudless climes and starry skies; And all that’s best of dark and bright, meet in her aspect and her eyes…”

As the play moves back and forth through time, scene by scene, the truth begins to emerge through the “noise” and the true mastery of the Promethean ensemble and Hoerl’s direction is made clear. With its sharp wordplay and intellectual complexity, Arcadia is daunting for both the actors and audience. But what seems clear in the first scene grows increasingly apparent as the play transitions from a sharp costume drama to a tender exposition on love and human frailty: in a very real way, the cast and crew of the Promethean Theatre Ensemble love this play.

And this is the truth about Arcadia. You need to love this play to do it right. Bringing Stoppard’s script to life is more about precision and performance than it is about interpretation. Just imagine Hamilton. Now imagine Hamilton performed by actors who don’t love hip-hop, music, dance, and theatrical storytelling. Imagine actors that can’t live up to their roles. Awful. Why? Because there’s no room for error. Arcadia is the Hamilton of dialogue and ideas. In lesser hands, the swirl of mind-blowing wows and the onslaught of super quick wit would be incomprehensible. The meaning would be lost. There’s no room for error. In Chaos theory, the “noise” is in the way, but in Arcadia everything, even the “noise”, matters.

This makes the Promethean Theatre Ensemble production all the more impressive. From Hoerl’s faithful direction, to Hagan’s perfect set and lighting, to Carrie Campana’s costume design and Rachel Watson’s props, to Tabor’s lovely conveyance of innocent genius, to Woolsey’s wit and charm, to West’s braggadocio, to Hutt’s clear insights, to De Lay’s allure, to Feagin’s pitch-perfect skepticism, to Smith’s smart flirtations, they get Arcadia just right. And that’s no small accomplishment.

Arcadia is produced by The Promethean Theatre Ensemble and is now playing at Greenhouse Theater Center's Upstairs Studio, 2257 N. Lincoln Ave. until December 16. Performance times vary; check the website at https://www.greenhousetheater.org/arcadia. Find more information about current plays in the Chicago area on our Current Shows page and at theatreinchicago.com.