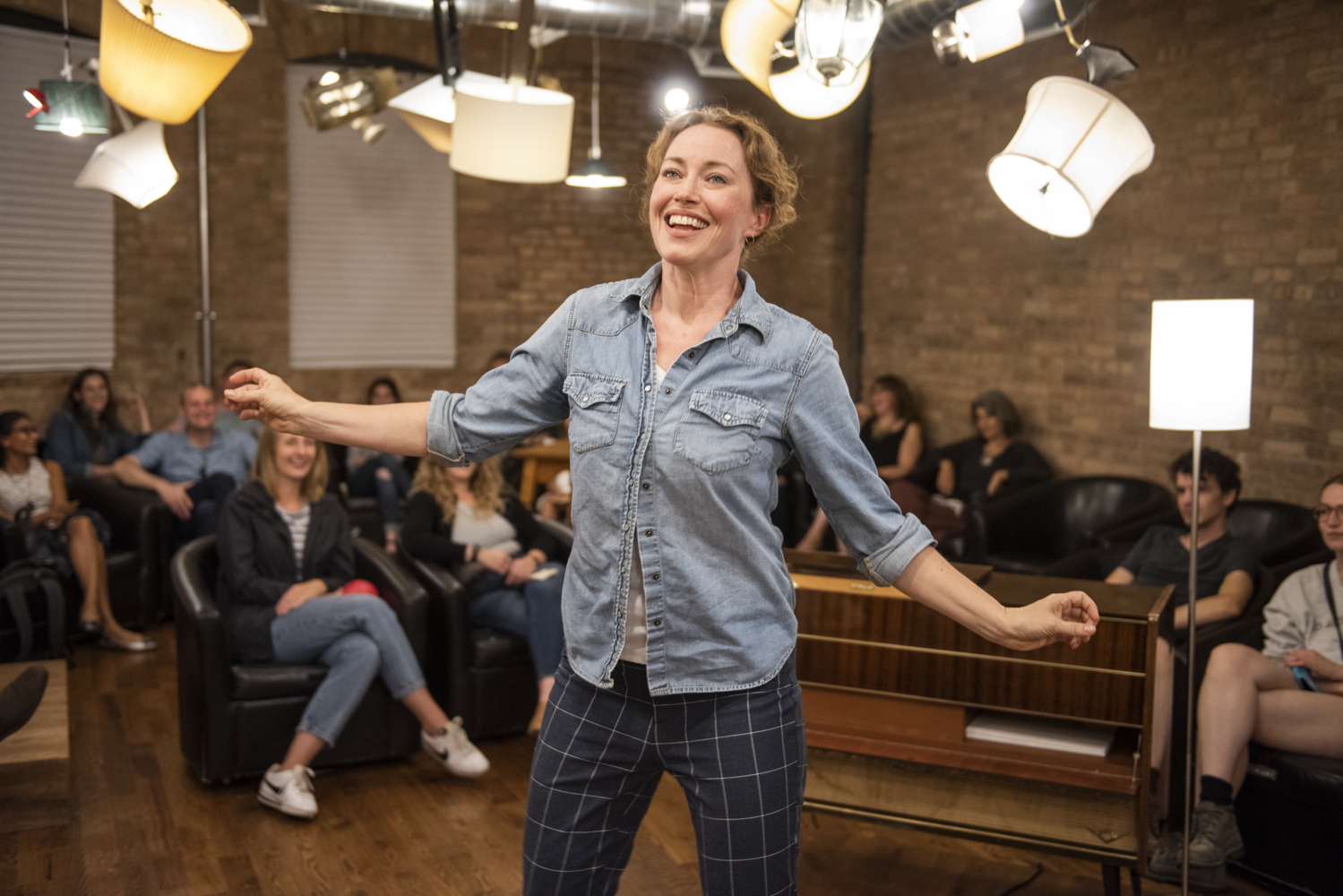 One of the most uplifting plays you will ever see is now playing in the South Loop, and it is about suicide. Actually, Every Brilliant Thing at the Windy City Playhouse South is about one woman’s reaction to her mother’s repeated depressions and suicide attempts. In an effort to find a way to cheer her mother up, she begins a list at age seven that attempts to catalogue all of the “brilliant things” in life, a list that begins—in a perfect seven-year-old way—with ice cream, and even as she grows up and realizes that depression isn’t that simple, her list keeps growing.

Duncan Macmillan’s heartwarming and at times hilarious play, performed in the theatre’s new loft space, stars Rebecca Spence as the woman who compiles this list and who takes us on a journey through her life. Spence is immediately likable and relatable, all the more so because the script calls for her to speak in a completely naturalistic way with all of the nuances of real speech that are usually smoothed out in theatre dialogue (like stammering and partial sentences and getting a bit lost in thought) left in. This kind of writing is often particularly difficult for the performer, who cannot rely on normal rhythms of dialogue. But the character she creates with it is a real person, and the journey she goes on is therefore even more beautiful, for all of its pain and its joys.

Throughout the show, Spence enlists audience members to help her to tell the story. (Windy City Playhouse has become known for immersive or interactive theatre.) Upon entering, everyone in the audience is given at least one item on the list by the actress to read out when she calls its list number. (Mine were “birdsong” and “the even numbered Star Trek movies.”) In addition, randomly selected members of the audience are asked to portray important people in the narrator’s life like her father, a therapist with a sock puppet, or the boyfriend she met in college. (Part of the fun of the evening is her interactions with these and other audience members, who don’t know what is coming.)

Director Jessica Fisch keeps this one-woman show alive and varied as Spence, running a gamut of emotional experiences, performs in several memory spaces scattered throughout the room representing such places as the kitchen in her childhood home, her father’s study, etc. Music plays an enormous role in her memories (and, let’s face it, that one category alone could account for thousands of entries on the list), as do books. So does lack of real communication, and there is a powerful moment similar to one in the musical Fun Home in which daughter and father, who have a real and critical need for conversation, sit in silence in a car.

There is an undercurrent of darkness in this play. It is, after all, about suicide and a child growing up in a house in which that event is always a possibility. Ultimately, though, like the dozens of lamps adorning the set, something bright can come from the shadows. Spence and Fisch concentrate on the brightness that Macmillan’s lovely play brings into the world. And the most brilliant thing of all is that the uplifting center of this play, the list itself, while bounded by numbers, is essentially never-ending. I’ve added to it throughout this review, and each audience member undoubtedly can conjure her own list of things that make the world brilliant. This is one of those plays destined to remain with me for a very long time.

Every Brilliant Thing is now playing at the Windy City Playhouse South, 2229 S. Michigan, Chicago through Dec 8. Check the website for specific dates, times, and tickets. Find more information about current plays in our front page recs and attheatreinchicago.com.