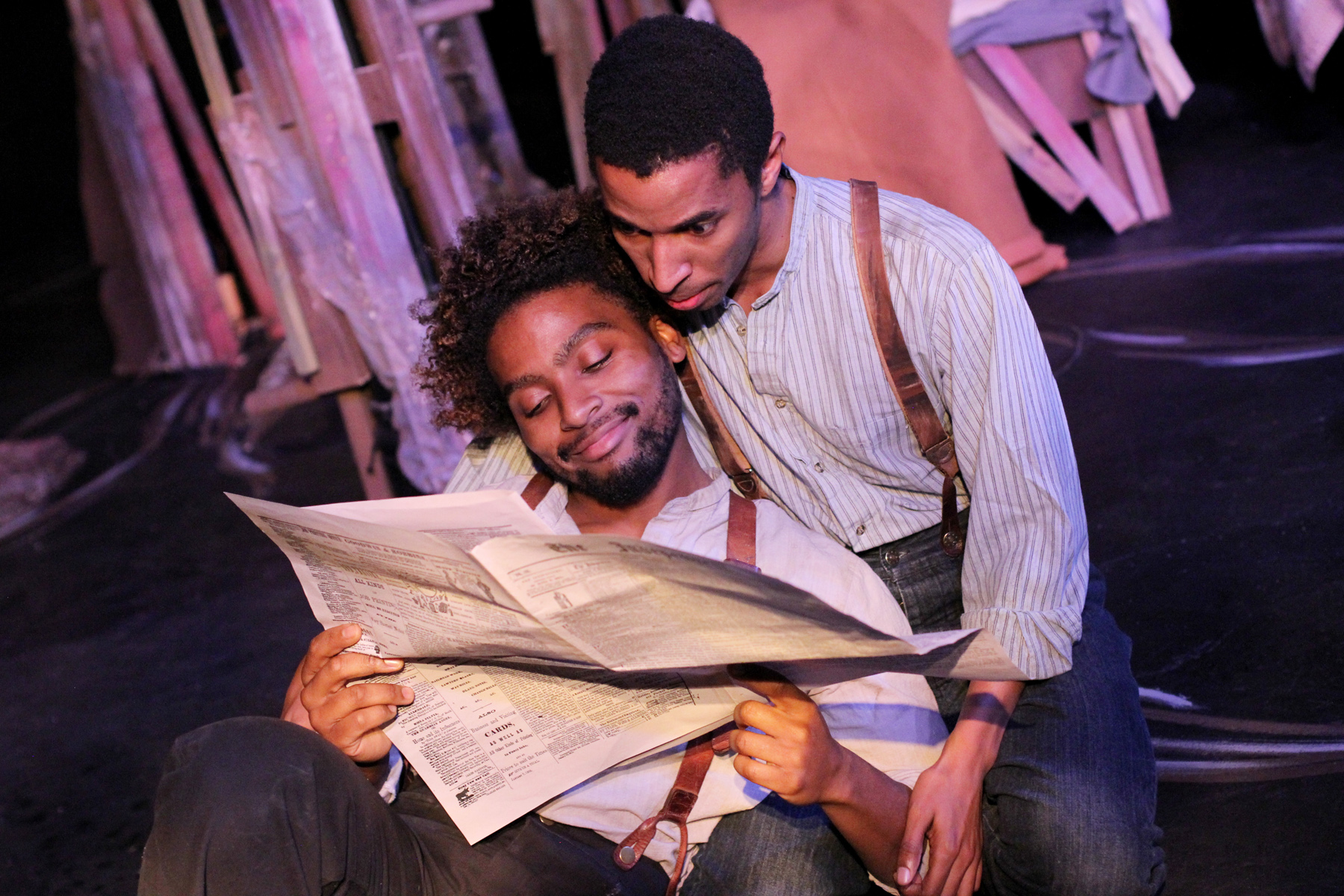 Partly a story about the experience of slaves during the Civil War, partly an unusual and devastating exploration of gay love, and partly an homage to the faith in something mystical that keeps us alive in dark times, Donja R. Love’s Sugar In Our Wounds is a complex and heartbreaking look at a makeshift family on a deep south plantation as they attempt to navigate their lives.

Love’s play takes place in the shadow of a highly unusual and enormous tree that grows on the plantation, its branches growing so high that it appears to be reaching all the way to heaven. As told by Aunt Mama (Renee Lockett), the slave family’s matriarch, the legend of the tree is that it is where all the male ancestors of the current group were hanged and where their spirits still reside. James (Michael Turrentine), a young slave who is trying to defy the odds and become a learned Black man, certainly believes it to be true as it explains the odd music the tree makes, the strange lights that can be seen in its branches, and the fact that he keeps hearing it murmur his name. The tree’s history may unnerve him, but its magical properties delight and mesmerize him.

Also living with James and Aunt Mama is Mattie (Ashley Crowe), a twenty-year-old who once was favored by the family in the main house as a playmate for Isabel (Grainne Ortlieb). But that was a long time ago: after Isabel’s father made Mattie a sexual conquest, the Black girl was cast out, beaten, and disfigured with cuts to her face, and her onetime friend has grown into a cruel woman, still obsessed with hurting Mattie at every opportunity, though willing to risk punishment to teach James to read. (She has her own darker reasons for that, however.)

The incident that incites the play’s main conflicts is the arrival in the shack of alpha male and secret homosexual Henry (Londen Shannon), who has just been torn from his own family and sold to this plantation. His arrival upsets the precarious harmony of the makeshift family, as he falls for James (who also has gay predilections) while Mattie is falling for him. She desperately needs to know what it is like to feel a man inside her because the master broke off before finishing the sex act, apparently remembering at the last minute that Mattie is actually his daughter (a fact that probably exacerbates Isabel’s hatred), and James is quite obviously not that man, so she’s been waiting for a chance like this.

Interestingly for a show that focuses on gay love, Mattie’s seduction of Henry is the only sex act played out on the stage. The encounters between Henry and James are absolutely PG, involving no more than kissing. In this play, even for Love, a self-avowed queer man, the love that dare not speak its name is secondary to heterosexual encounters. Still, there is an undeniable connection between them that Henry does not at all share with Mattie, most of which is due to Shannon’s expressive performance. (Turrentine’s character’s emotions are torn, so his interactions with the tree seem more sublime.)

This is a play rife with modern emotion and argument despite its Civil War setting. While there was certainly gay activity among the slaves on southern plantations, the acceptance of it here feels rather anachronistic. Aunt Mama proclaims, in answer to James’s query about whether it is “normal,” that not only is is completely common in Africa—though, since she’s “older than God” and has spent her whole life here, how she would know that is not quite clear—but that she herself has been with many women. (Despite relying on her script at times, Lockett rocks this part; her Aunt Mama is an uncommonly sympathetic, all-knowing, once-vital woman who is weighed down by age and the pain of loss.)

Director Mikael Burke, working on a set by Joy Ahn that suggests more than shows the tree and the shack (which adds to the somewhat surreal undertones of the mystical aspect of the play), brings out excellent work in his cast. All five of them create singular, authentic characters (Ortlieb’s is so utterly and realistically detestable that you want to throw something at her) and interesting, overlapping dynamics. His creative team is also strong, from Madeleine Byrne’s period costumes—both for the slaves and for Isabel— to the very effective lighting (Eric Watkins) and sound (Sam Clapp) that not only set the scenes but bring the tree to life.

Because this is a melodrama, prepare for some strong emotional responses. (One woman at the show I attended left at the end openly sobbing.) Though I am not quite sure that Love made the best choice here by introducing the mystical to what was already a powerful story with serious and painful elements about the treatment of slaves and homosexuals—maybe the play would have been more powerful without magical distraction—there is no doubt that the tree’s history adds a potent and omnipresent reminder of historical persecution to the moments we are witnessing. Today, decades after the civil rights movement ostensibly made the races equal, in an era in which gay marriage is legal across the US, we continue to witness additions to this persecution brought on by ignorance and hatred. Sugar In Our Wounds is a reminder (as if we need one) that the historical fight goes on and there is not a real ending in sight.

Sugar In Our Wounds is a First Floor Theater production now playing at the Den Theatre, 1333 N. Milwaukee, Chicago, through Nov 23. It is presented in 100 minutes with no intermission. Check the website for specific dates, times, and tickets. Find more information about current plays in our front page recs and attheatreinchicago.com.