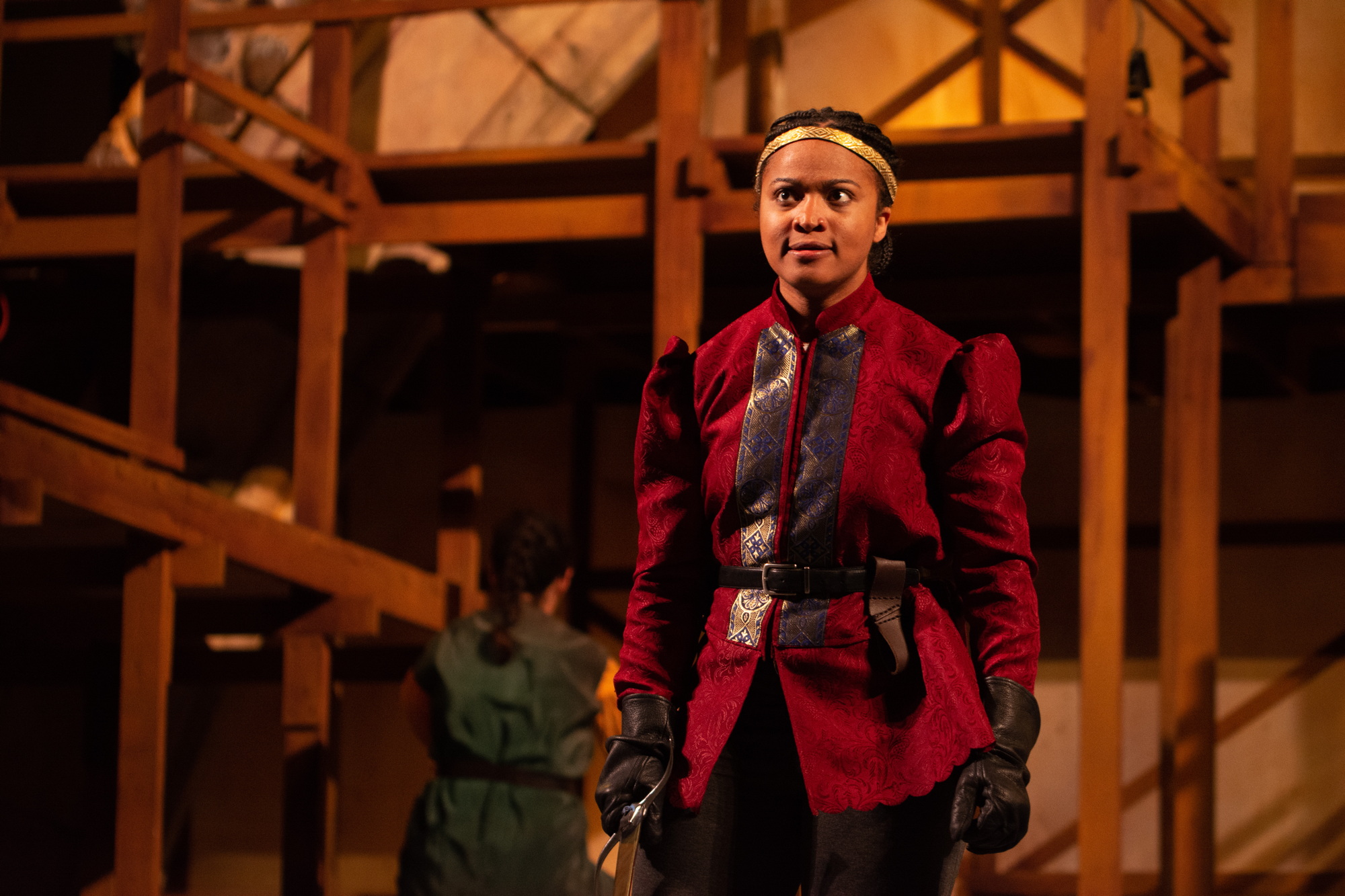 A pop-up thunderstorm soaked the areas just south of Oakbrook’s Mayslake Peabody Estate an hour before showtime Saturday night for the premiere of First Folio’s Henry V, but it did nothing to deter the band of players and audience members on hand for the final production ever on the theatre’s two-decades-old outdoor stage, which will be rebuilt after this season. If anything, having the storm skirt the grounds leaving only a scattering of drops set the stage perfectly for this play in which the English, against great odds and facing what seemed certain defeat, managed to achieve an overwhelming victory against the French, losing only a handful of men as they swept across the country and ultimately prevailed in the Battle of Agincourt.

Director Hayley Rice’s production, an expansion of her Babes With Blades production in 2017, again features the incredible Diana Coates as Henry, a bit of nontraditional casting that Rice says should have the effect of “(jolting audiences) out of their assumptions so that they can see the play in a new way.” And Coates definitely does her part: from the opening scene, even though she is sitting down and has fewer lines than others, it is clear that Henry is completely in charge. Further, as the play goes on, Coates creates a King who has been openly molded by the flaws of his youth (well established in Shakespeare’s Henry IV plays) and both chastened and empowered by them. She establishes him as a thoughtful, honest King who has no patience for those who would violate his orders or seek to betray him, but a kindly one as well who cares deeply for his soldiers. It’s a tricky role to play, for this still-young King was extremely and famously wild in his youth (to the point where even the French are aware of his former lack of fortitude). Yet there is something about Coates’ performance that makes it easy to believe that these soldiers, despite knowing his faults, will trust him implicitly: it is a strong yet endearing characterization.

Coates also is wonderful with Henry’s many lengthy monologues and soliloquies, giving the complex thoughts and phrases new life and emotion whether she is exhorting the soldiers to fight (“we few, we happy few, we band of brothers”), seeking to woo the French Princess Katherine (Sophie Scanlon, who also plays the Dauphin), or discussing and punishing malfeasance among the ranks. This latter occurs early in the play, as Henry firmly establishes that, no matter what others may believe due to his past, he is not going to be a weak King and will not be doubted as a leader. When the Dauphin and others in the French court echo the old taunts levied against him, it is obvious that they are underestimating him to their peril.

The rest of the cast is also superb, especially Scanlon, Lydia Berger Gray as the Chorus, Arielle Leverett as the French herald Montjoy, Morgan Manasa as the Welsh soldier Fluellen, and Sean Sinitsky as Pistol. Scanlon gives us both the caustic, haughty Dauphin and the more demure but still independent Katherine. Both of her performances are among the play’s best. Gray is tasked with making Shakespeare’s many lengthy scene-setting monologues both clear and enjoyable for the audience, and she does so brilliantly, blending nicely with the play’s overall conceit that we are actually 21st Century tourists taking a journey to see the famous castles and sites of France’s history, a fun conceptualization that we are repeatedly reminded of in voiceover between scenes of history being played out. Leverett, who also plays the hot-headed soldier Michael Williams, who argues with the disguised Henry on the eve of the battle, is somehow both submissive and aggressive as she delivers messages to Henry from his French counterpart demanding his immediate acquiescence. Without overt sarcasm, she easily shows us Montjoy’s partisan desires within his diplomatically neutral position. Monasa, whose character no one could mistake as neutral, easily captures the emotions Fluellen wears on his sleeve, and in his late proclamation that “I need not to be ashamed of your majesty, praised be God, so long as your majesty is an honest man” shows us the change of heart most of England has had about the monarch despite his past sins. Sinitsky, who also plays the King of France, does a fine job with the complicated role of Pistol, the dishonest barman who mostly finds his way into this play as part of Shakespeare’s efforts to bring to conclusion the story of Sir John Falstaff, the boisterous, drunken and amoral comrade of Henry’s youth. Sinitsky gives us an easily recognizable portrayal of the kind of duplicitous and self-centered man a younger Henry kept company with and now, as King, shuns and decries.

Rice uses the outdoor stage well, establishing multiple specific locations among its many levels and branching out beyond its boundaries in several scenes. She sends Coates into the audience more than once to deliver Henry’s soliloquies directly to the gathered crowd. She also uses every inch of the stage as well as the areas in its immediate vicinity for the enormous Battle of Agincourt (with fight design by Rachel Flesher), making her cast seem much bigger than it is. It’s easy to understand why, when it is finished, Henry is not even really sure if he has carried the day: this battle raged on over a very large area and involved tens of thousands of men.

This production of Henry V, anchored by a bravura performance by Coates, is a most fitting farewell to the old stage, which has been in service since Rice’s parents founded First Folio 22 years ago. David Rice intends to close down the company’s outdoor season next year before returning with a new stage in 2021. Until then, we’ll have to make do with the memory of this brilliantly cast, carefully edited, and cleverly directed play to tide us over.

Henry V is a First Folio Theatre production now playing at the Mayslake Peabody Estate, 31st St and Rt. 83, Oakbrook through Aug 18. Check the website for specific dates, times, and tickets. Find more information about current plays in our front page recs and at theatreinchicago.com.