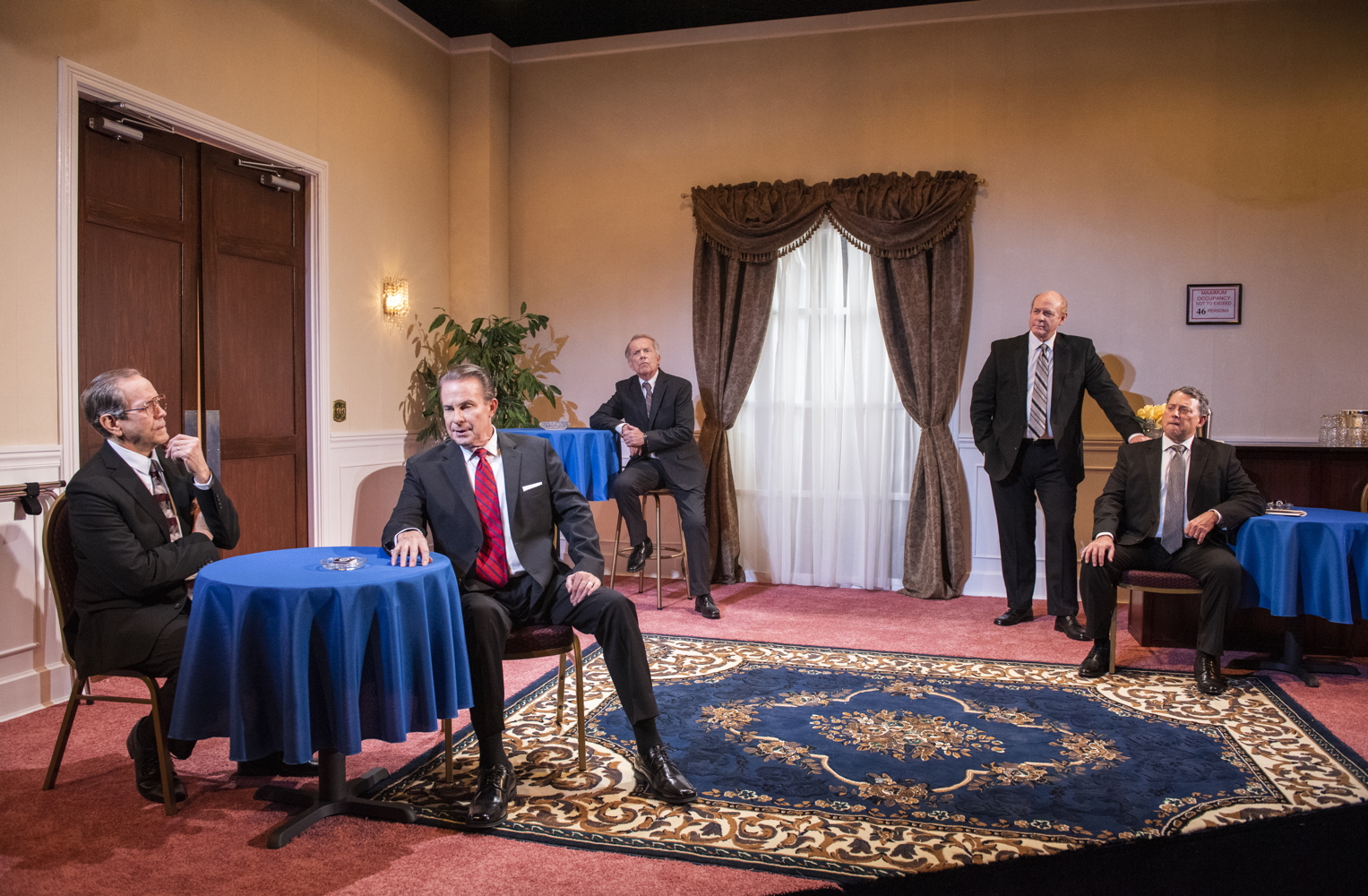 On April 27, 1994, five living US Presidents (Gerald Ford, Jimmy Carter, Ronald Reagan, George Herbert Walker Bush, and the current occupant of the White House, Bill Clinton) gathered together to attend the funeral of another member of their club, Richard Milhous Nixon. In order to facilitate security with so many former Chief Executives together, the Secret Service had them all gather and wait in a single room within the Nixon Library in Yorba Linda, CA.

No one alive today other than Carter and Clinton know what was said in that room, but playwright Rick Cleveland’s Obama-era play Five Presidents—revised for this midwest premiere from American Blues Theatre with a nod to our changed national mood—imagines what might have transpired when these men, from differing political perspectives, were forced to spend some quality time together. The result is a very witty dramedy that uses their partisan disagreements as well as their ultimate connection as the only men who had a real idea of what it is like to be President to forge a memorable, no-holds-barred, far-ranging conversation among five of the most well-known politicians of their age. Marty Higgenbotham directs a very strong cast in this astute evocation of both the political climate of the early Clinton era and the personalities and careers of both him and the other four who had held his job.

The first of these men that we meet is Ford, wonderfully portrayed by Tom McElroy, whose mere physical presence reminds us that this President was nothing like the clumsy clown Chevy Chase made him into (he was actually recruited by two NFL teams). Ford, haunted by the Nixon pardon that became his legacy and the long-whispered rumors that he had struck a deal with his predecessor to give it, cannot bring himself to deliver the eulogy he is scheduled to present, and his refusal is the source of an ongoing conversation that eventually involves all five men as well as the Secret Service Agent Kirby (Denzel Tsopnang) who is in charge of the room. McElroy shows us Ford’s conflicted emotions about this day in a mostly quiet, dignified performance.

Jimmy Carter (Martin L’Herault), the man who defeated Ford, enters next. L’Herault does a fine job of impersonating Carter’s most memorable characteristics, but (as is the case for all of the actors) he goes far beyond mere impersonation to give a lovely, nuanced performance. We see a Carter who, yes, bears himself calmly and flashes that trademark smile and winning Georgia accent, but also one who holds some political grudges. He lashes out, for example, at the mention of Ted Kennedy, who violated tradition by running against his party’s incumbent President in 1980 and against Reagan for the deal he struck with the hostage-takers in Iran that helped to stop Carter from winning a second term, and there is also an undercurrent of irritation at Clinton, who had recently appointed Nixon rather than Carter to represent the US in Russia.

If you’re getting the impression that Cleveland’s play is dense with the political baggage and history of the last forty years, you’re not wrong. It is, however, also highly entertaining. The interplay among these Presidents is sharp, focused, and often quite funny. Ford, for example, won’t drink because, as he notes, it’s difficult to get away with that when your wife’s name is plastered on a nationwide chain of rehab centers. The script also pokes some fun at Clinton’s callously unprofessional extracurricular interests and Reagan’s memory lapses, though the latter are tempered by the historical knowledge of his Alzheimer’s disease. (He would disclose his diagnosis six months after this meeting.) It also has a liberal (no pun intended) dose of Nixon humor.

As Reagan, James Leaming makes an ingratiating and sympathetic presence. Despite the President’s mental deterioration, he is still the soft-spoken, genial man who was elected to two terms (at the time the only President since the fifties to manage that). He’s quick with a joke as well, though his frustration with his condition causes him to snap on occasion. Leaming shows us the Reagan we remember but also allows us to see the sad thing that is happening to him. There is something tender at the heart of his performance, politics aside.

Perhaps the most fascinating performance of the evening belongs to John Carter Brown as Bush I. Still reeling from his unexpected defeat by Clinton, Bush is hardly either the genial “thousand points of light” President or the composed elder statesman that he later became. Here he is an openly angry man, extremely testy when any mention of his successor occurs and outright nasty when the younger man actually arrives. (Clinton and Bush later became fast friends, but the pain of his recent and ignoble defeat still weighed upon him in 1994.) Brown’s impersonation occasionally slips into Dana Carvey from SNL but, for the most part, he is true to this moment in Bush’s life when he is struggling with what he sees as a premature induction into the ex-Presidents club. Brown allows us to see the normally calm Bush’s discomfort with his own inability to control his anger and frustration in a performance that is utterly compelling.

The object of his anger is Stephen Spencer’s Bill Clinton, the “new kid” whose youthful arrogance is the bane of all of the ex-Presidents. Spencer’s version of Clinton, who at this point in his Presidency was already being dragged through the muck of Whitewater and his sexual dalliances that would soon cost him a congressional majority and later result in impeachment, is a man a bit too full of his early success. He appalls the others with joking sexual references and narcissism, and he gleefully refers to himself as “the first Black President,” a moniker that Toni Morrison had given him. (He also received a deserved comeuppance from Tsopnang’s Agent Kirby—in a great speech—for his superficial understanding of Black American life.)

In addition to guiding his actors to their honest portrayals of these famous men, Higginbotham does a fine job of keeping the play’s action tight and realistic and using the space that Grant Sabin designed for him. Based on the actual room at the Nixon Library in which the men met, though rendered much smaller for this stage, Sabin’s realistic set (complete with a chandelier) is carefully lit by Alexander Ridgers, who uses the light coming from the window to strong effect.

Five Presidents is a sort of political time capsule. If you are a Boomer like me, you will find yourself remembering all of the events mentioned and reconnecting to a long-vanished past in which Presidential flirtations (or even “commit(ting) adultery in my heart” as Carter said he had done in an interview while President), were seen as a source of lasting scandal. If you are younger, you may not have personal recollections of these men’s Presidencies and personalities, but you are most likely at least aware of them and the impact they had on the United States. In this remarkable, humorous, and honest play, Cleveland brings them all up close and personal and shows them to be exactly what they were: flawed but honorable and decent people. In an era when loud insults are flung across the aisle daily in both directions and in which it is difficult to imagine even the somewhat strained civility that the play demonstrates, it serves as a reminder that such things once were possible, and a prayer that they will be again.

Five Presidents is an American Blues Theatre production now playing at Stage 773, 1225 W Belmont, Chicago through Oct 19. Check the website for specific dates, times, and tickets. Find more information about current plays in our front page recs and at theatreinchicago.com.