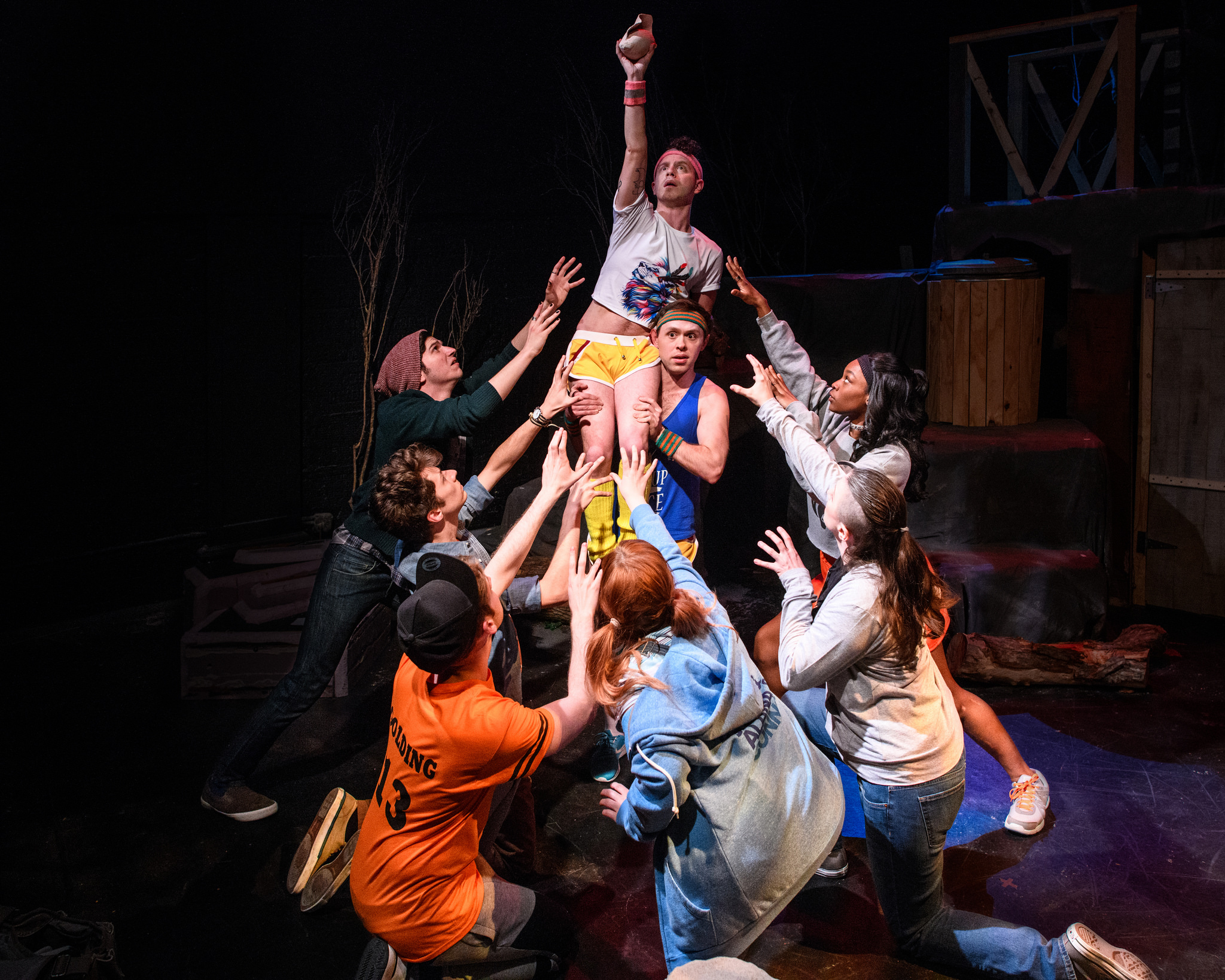 The word “fun” has rarely, if ever, been used in the same sentence as William Golding’s The Lord of the Flies. Neither has the word “funny.” Both, however, aptly apply to Flies! The Musical, an unauthorized parody of the award-winning novel now playing in its world premiere presentation at the Pride Arts Center. Written by Chicagoan Larry Todd Cousineau and Cindy O’Connor, Flies! is a wonderful, hilarious conflation of the Golding novel, “Glee” and and every “let’s put on a show” production you’ve ever seen. It is clever to the point of being brilliant, propelled by writing that is pure genius. You don’t often hear a pre-show announcement to “come again and bring your friends” that you can take seriously, but in this case I firmly believe the musical will have repeat customers; it’s that good. 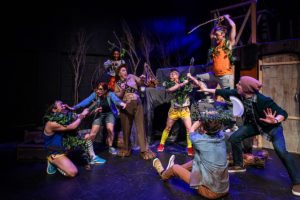 The plot involves the drama club of Lovely Valley Performing Arts Magnet High School and their efforts to put on a musical written by their teacher and based on Lord of the Flies. [A running joke informs us that they cannot say the full title of the book because they could be sued for copyright infringement. One key song is therefore called “Lord of the (Blank).”] They have taken their current rehearsal to a deserted forest preserve for some verisimilitude, and they accidentally get abandoned there. As they continue rehearsing (and hoping for “rescue”), things begin to devolve among them in a precise mimicry of the events of the novel.

Directed by Michael Driscoll, Flies! is perfectly paced with characterizations that simultaneously caricature specific boys in the story and carve out new individual traits for the “high school kids” they are playing. Driscoll’s cast has a great time with all aspects of the play, though there is a serious message beneath all of the silliness that isn’t far from Golding’s. One song, meant to be the finale for the show-within-a-show, is called “Everyone’s Inherently Bad!” and is a blunt, on-the-nose summation of the book’s main theme. 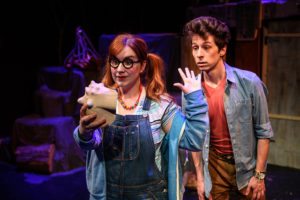 Characters include Pigtails (called that “because I have pigtails”), played by the talented Missy Wise, who is the nerd and the clear-thinker of the group (like the character Piggy in the book). Wise finds her early playful side in a song called “Conch’a Hear It?” (If I need to explain that to you, you’ve never read the book and wouldn’t get it anyway.) Later, unlike her book character, Pigtails steels up her own determination with “I Won’t Be Left Out Again,” in which Wise takes over the stage with her clear, strong voice.

All of the performers here have excellent singing voices, and all seem to be having a joyous time with this goofy material. Mario Aivasian plays Rick (roll your R when you say that), the calm and thoughtful early leader of the group, opposed by Jeff Meyer’s Jake, the football player who later assumes leadership and starts the students down the path to inhumanity. (Why a magnet school for the performing arts has a football team is never quite addressed.) 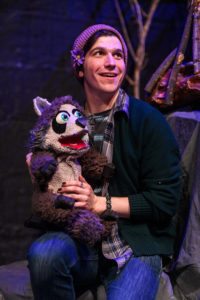 Nicky Mendelsohn is Stephen, a sensitive soul and vegetarian who has two standout numbers: the sweet “The Flora and the Fauna,” in which the cast uses animal puppets created by Adam McAleavy to show how Stephen communes with nature, and the hilarious “Eat Me, Stephen,” a take-off on “Feed Me, Seymour” from Little Shop of Horrors in which a garbage can full of discarded meat tempts the vegetarian youth in his hunger. The song features Jayla Williams-Craig as the powerful voice of Pork. Williams-Craig also plays Rhonda, a cheerleader who follows Jake from the start, and lends her voice to “The Strong Survive” (in which she goes off into a Gloria Gaynor solo) and “Kill! Kill! Kill!,” in which the group goes off the deep end. 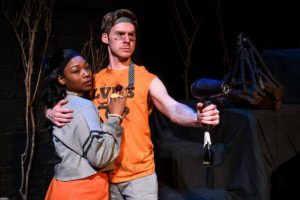 Joining Rhonda in that song are the “Young’Uns,” played by Joey Fontenetta and Ryan Armstrong, who are a hilarious, “look-alike” pair of flamboyantly gay characters who speak simultaneously and move as a unit. Their “We’re Not Actually Twins” is even more funny because the actors don’t much resemble each other, and Sawyer Smith’s choreography in that number is especially outrageous and hysterical. Christea Parent is the mute “shy girl,” but she also shines as Ranger Pat, the musical-loving park ranger who happens upon the kids late in the show.

If you are getting the impression that this show is really good, then I am doing my job. From the second you enter the theatre to see Sarah KHP Watkins’ set (nicely lit by Shelbi Arndt with insect and other sounds provided by John Nichols III), you are immersed in the “wilderness” experience these kids find themselves in. When they come in and immediately tell the story of the novel’s unfortunate lads in song and then break out of their faux-British accents to become the theatre geeks they are, complaining that they are rushing the exposition and discussing staying in character the whole time they are rehearsing, you know you’re in for a good time. By the time “The Leader Song” is through and all of the stakes are set up, they have captured you completely.

I have to admit that I was leery when I heard the title of this play, but it far exceeds expectations. It is a comic gem with witty, inventive lyrics and tons of joy. If I had the chance, I would go see it again. It’s that much fun. I loved this show, one of the brightest productions of 2018 so far.

Flies! The Musical is a Pride Films and Plays production now playing at the Pride Arts Center,  4741 N Broadway, Chicago, until June 10. Performance times vary; check the website at Pride Films and Plays. Find more information about current plays on our Current Shows page and at theatreinchicago.com.