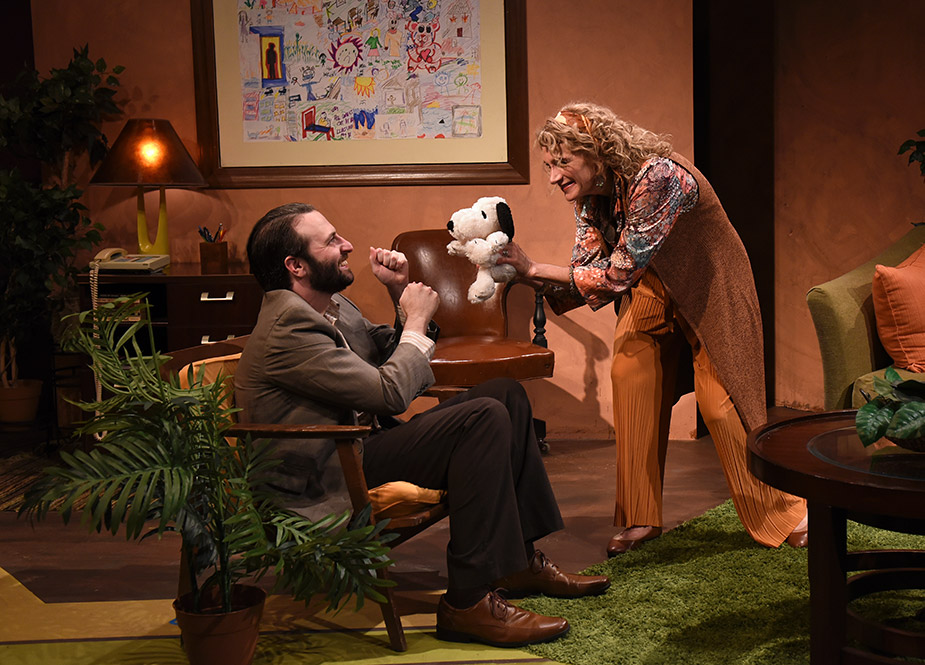 A long time ago, so long it seems as if it were another lifetime, I was the coach of my high school’s forensics team. (Forensics, sometimes called speech team, is an extracurricular program in which young actors and speakers are able to strut their stuff in a competitive environment…and maybe win trophies.) As the coach, I had to help students to find monologues and scenes that they could perform. In the very early days of my career, two of those scenes came from Christopher Durang’s absurdist farce, Beyond Therapy. Kids had a lot of fun with them, playing up the ridiculous comedy and creating the odd characters. However, until this week, long after that phase of my life had concluded, I never actually had the opportunity to see the full play performed. All of that changed, though, with Eclipse Theatre’s enjoyable (though very dated) current production, playing until August 18.

Played on Samantha Rausch’s wonderful late 70s/early 80s set, featuring designs and furniture that those of us who actually lived through that era recognized immediately, the play tells the story of two nervous and neurotic thirty-something people, Bruce (Nick Freed) and Prudence (Devi Reisenfeld), both of whom are undergoing therapy for various reasons. Bruce, who is involved in a long-term gay relationship with Bob (Siddhartha Rajan), has decided seemingly on a whim that he is bisexual, and despite Bob’s fears about it, he is seeking a woman to share life with. His therapist, the outrageously flaky Charlotte Wallace (Lynne Baker), who randomly quotes from Equus, can’t seem to remember words (or the fact that Bruce is gay), and uses a stuffed Snoopy as part of her therapeutic technique, has encouraged him to compose a Singles ad and publish it. (Ah, those simpler pre-dating app times.)

In the opening scene, set in a restaurant, Prudence answers his ad and the two, both of whose neuroses are firing on all cylinders, don’t exactly hit it off, and then we join her for her own therapy with Stuart (Joe McCauley), a thoroughly detestable narcissist who styles himself a macho man and who preys on his clients; in fact, he has had a brief affair with Prudence that he constantly tries to continue, despite her past and present rejection. It is clear that one of the main jokes of this play is that these two therapists are more desperately in need of therapy than their clients ever could be.

A 2019 look at all of this immediately discerns problems, from the predatory therapist to the use of gay stereotypes, but Rausch’s set and Zachery Wagner’s costumes keep reminding us that this is forty years ago, and we are asked to look past the issues and see it as the silliness Durang intended it to be. Surely director Rachel Lambert and her cast do everything that they can to play up the absurdity and keep the audience’s minds firmly embedded in that less politically correct era. But your ability to do that will go a long way toward determining your reaction to the play.

Freed and Reisenfeld are wonderful in the central roles, Freed creating a Bruce who is believably a complete mess of contradictions. One minute he is extremely self-confident (“I feel we agree on everything”) and the next, to Prudence’s chagrin, he is in tears. (Charlotte encourages him to cry when he feels like it.) Reisenfeld’s Prudence, who protests that she isn’t sure that she believes in bisexuality but continues to see a man she knows has a male lover, clearly knows she has problems but seems desperate to get to the bottom of them. She attempts to stand up to those who she feels are manipulating her, throwing water in Bruce’s face and trying to walk away from Stuart, though she is not always successful (mostly because she can never really be certain of what she actually desires). As the therapists, Baker and McCauley really lean into the obvious mental chaos of their characters, whether it is Charlotte’s inability to remember that her secretary is not a dirigible or Stuart’s throwing a fit when he doesn’t get his way. They are both cast perfectly, as is Rajan, whose Bob is a physically withering heap of emotions in the middle of a breakdown.

If you can keep yourself focused on the play’s intent, rather than allowing your mind to start contemplating things from a 21st Century perspective, there is a lot to enjoy in this play. It is well-acted, designed and directed. And Christopher Durang is a genius of absurd comedy, so it is often very funny, even if the Equus references go over your head. Beyond Therapy is what Eclipse shows it to be: a very silly product of its era. It really never tries to be anything more.

Beyond Therapy is an Eclipse Theatre production now playing at the Athenaeum Theatre, 2936 N. Southport, Chicago through Aug 18. Check the website for specific dates, times, and tickets. Find more information about current plays in our front page recs and at theatreinchicago.com.