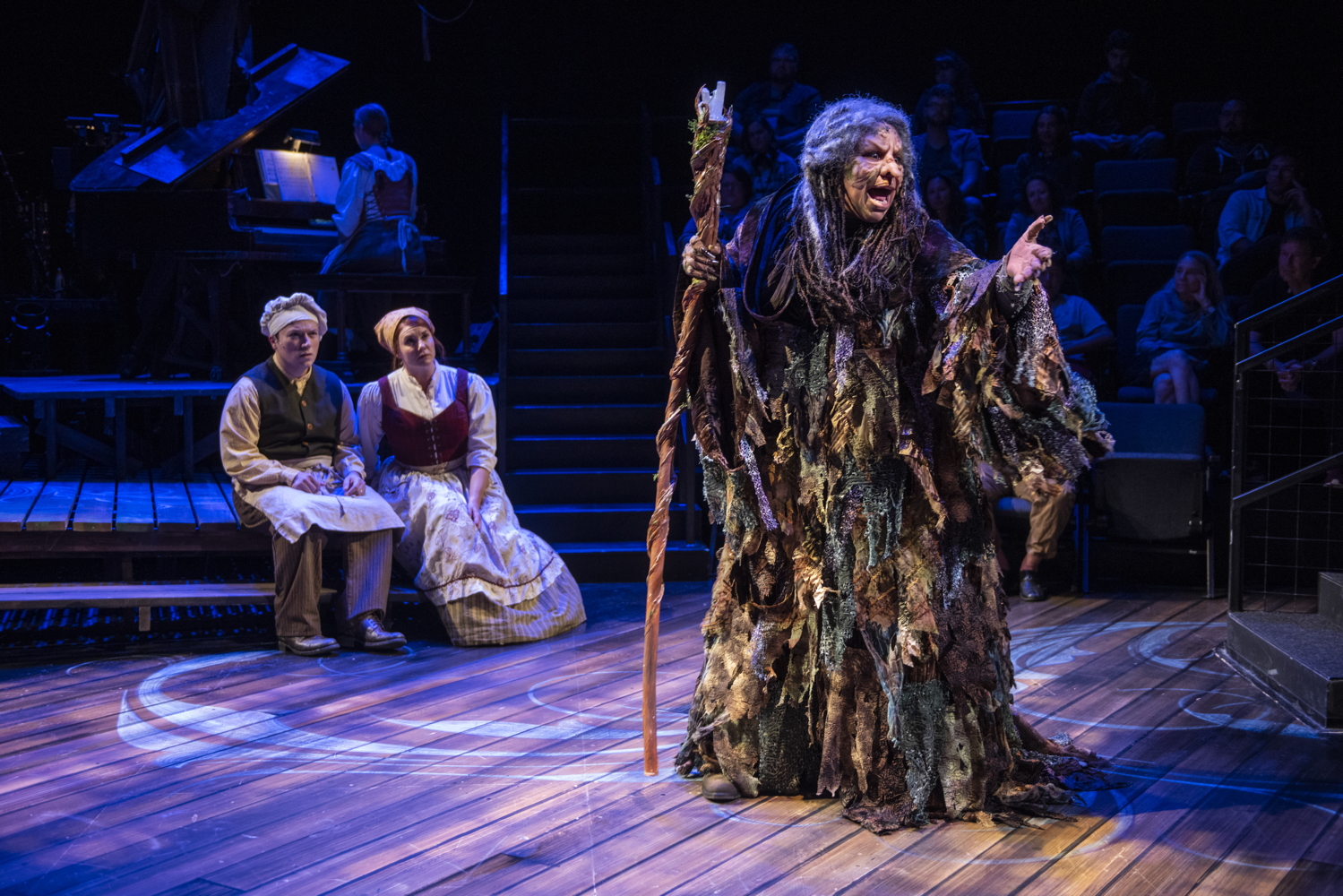 Stephen Sondheim and James Lapine’s Into the Woods has been a source of joy and fascination to me since its 1987 Broadway premiere. I listened to and wore out recordings of its soundtrack long before I ever actually saw the show, and I directed it myself at Lake Forest High School in 2001. I think what has always intrigued me is a combination of childlike enchantment with its fairytale structure, my lifelong attraction to the concept of storytelling, the thrill of Lapine’s exploration of what happens after “happily ever after” as well as his wonderful sense of humor, and the beauty and emotional power of Sondheim’s most accessible score. And now, in the enthusiastic hands of longtime Sondheim interpreter Gary Griffin, Writers Theatre has produced a compelling and exciting version of this musical in its Nichols Theatre, which has been transformed into an in-the-round playhouse for this production.

That reconfiguration of the Nichols space has the effect of immersing the audience even more deeply into the show, focusing our attention on the travails of the band of fairytale characters who make up its cast. Into the Woods combines the classic stories of Cinderella, Jack and the Beanstalk, Rapunzel, and Little Red Riding Hood with a tale of Lapine’s creation, The Baker and the Baker’s Wife, a story of a childless couple who learn that “the witch from next door” long ago placed a curse on the Baker’s father preventing any more progeny from being born into his family. For her own reasons, the witch tells them how to lift the curse by going “into the woods” and bringing back an eclectic collection of items. Of course, they do that eagerly and, while in the woods, cross paths with Jack, whose mother (McKinley Carter) has him traveling to the market to sell his cow (which Griffin has chosen to be played by a human actor, Mary Poole—in a fun performance—instead of the prop cow that is usually used), the girl in the red cape heading to her grandmother’s house, both Cinderella and her prince coming from the ball, and other inhabitants of the forest.

Each of the tales is played out by characters making choices for themselves, not even thinking about the impact on others, and by the end of Act One they have all been resolved into a glorious “happy ending” (tempered a bit by the Brothers Grimm and their darker, more violent versions of the familiarly Disneyfied tales). It’s in Act Two, though, that Sondheim and Lapine really go to town. Aware that every one of these characters has engaged in selfish desires and deceit to get what they wished for, they take us back into their stories to discover just what real-world consequences there could have been for such actions. Suffice it to say that Act Two, while every bit as funny as the first act, is considerably darker, and the fairytale characters discover that it is only by joining together for the common good that they can survive.

Griffin’s wonderful vision of all of this plays out on the theatre’s now central floor under the overhanging branches of scenic designer Scott Davis’s huge, magical tree (below which are the three musicians who beautifully play Sondheim’s music). Griffin also uses aisles and landings, along with a couple of platforms directly below the tree, to create more dimensionality in his presentation. All of this places the characters up close to the audience, and indeed they sometimes even interact with people seated near them. This is probably the most personal Into the Woods ever conceived.

The outstanding ensemble, all of whom have wonderful singing voices, features Bethany Thomas in a powerful, passionate performance as the witch. Her poignant and plaintive “Stay With Me” is as intense as her commanding “Last Midnight” and her introspective “Children Will Listen.” Michael Mahler and Brianna Borger portray the Baker and his wife, the two original characters that Lapine conceived as audience stand-ins in a world rapidly spinning out of their control. Borger and, especially, Mahler play the role of Everyman here, easy to relate to characters whose confusion and emotional experiences most closely mirror our own as they attempt to navigate a thoroughly unfamiliar landscape full of dangerous—though exciting—elements they never have encountered while simply running their little bakery. Their discovery that “It Takes Two” to make anything worthwhile happen marks the climax of the first act.

Cinderella, also thrown into a completely unfamiliar situation as she morphs from servant to princess, is played by Ximone Rose, who is as completely believable talking to birds as she is playing the confused young woman “On the Steps of the Palace.” Her and Mahler’s characters undertake the most dramatic journeys here, developing from single-minded people into truly deep and compassionate souls. It is no wonder that Sondheim gives them the truly beautiful and revelatory “No One Is Alone,” which they sing alongside of Ben Barker’s Jack and Lucy Godínez’s Little Red, each of whom shines in their own solos earlier as they discover what lurks in the woods (including Matt Edmonds’ gluttonous Wolf, in whom Griffin has chosen to tone down the underlying predatory sexuality that is often played more on the surface, possibly as a response to #metoo).

Alongside of these characters, we meet two princes (Alex Benoit and Ryan McBride) who are comically confused about how they—as handsome and charming members of royalty—have such problems with women, Rapunzel (Cecilia Iole), who has been held captive in a tower by the witch for her whole life, Cinderella’s stepmother and stepsisters (Kelli Harrington, Nicole Arnold, and Molly Hernández) as well as the spirit of her mother (Harriet Nzinga Plumpp), in addition to a Mysterious Man played by the venerable William Brown and the show’s Narrator, portrayed in his return to the stage after a 17-year absence (clearly a coup for Griffin) by Writers Theatre Artistic Director Michael Halberstam, the crowning member of a remarkable cast.

Writers Theatre’s Into the Woods is unlike any version of the play you’ve ever seen, but it retains both the playful and emotional elements that mark this musical as special. In all aspects—acting, music, directing, design—it reinforces and imaginatively reinvents the play in ways that will appeal to both those new to the show and those who have seen it a dozen times. It’s a magical piece of theatre.

Into the Woods is now playing at the Writers Theatre, 325 Tudor Ct, Glencoe through Sep 22. Check the website for specific dates, times, and tickets. Find more information about current plays in our front page recs and attheatreinchicago.com.