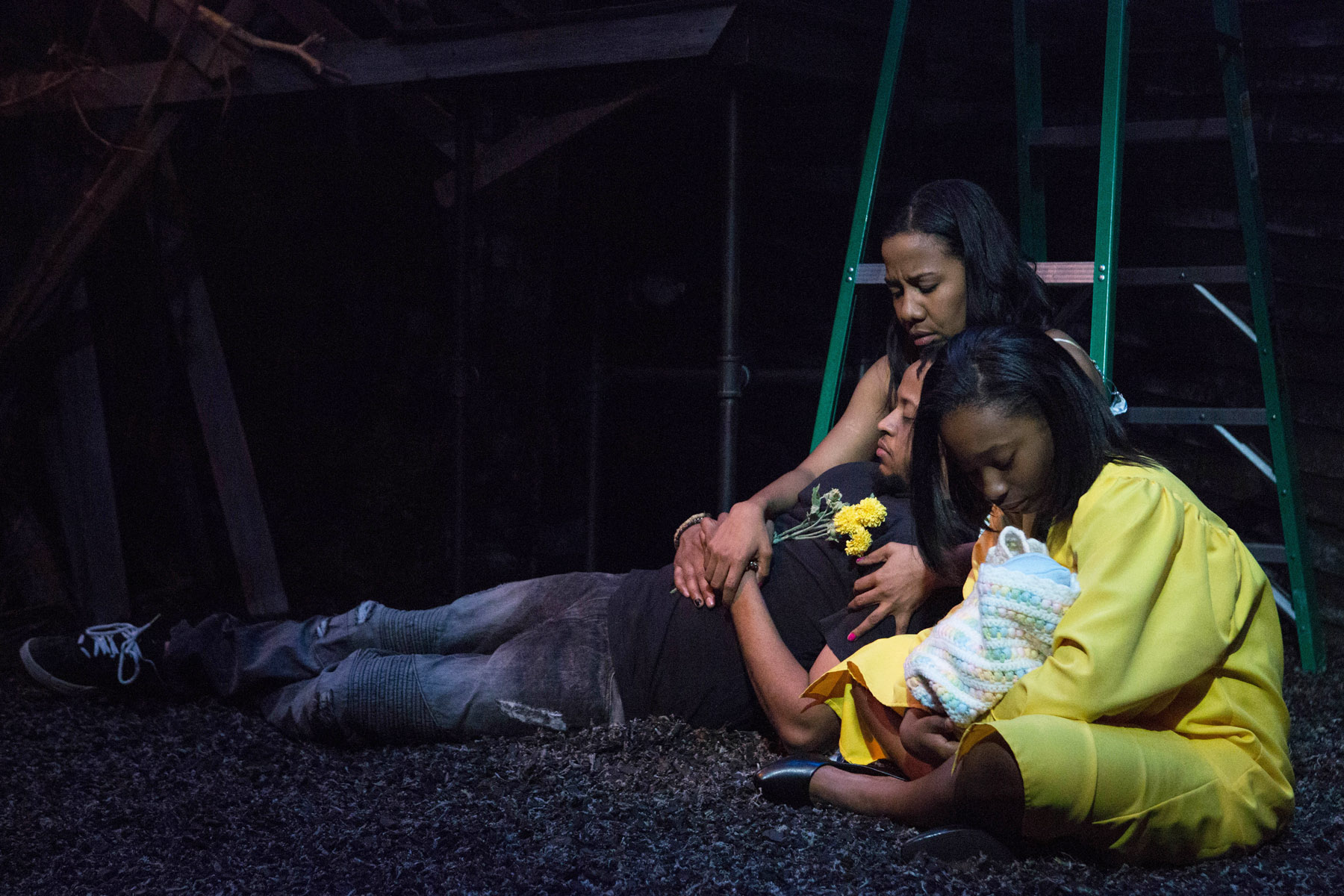 If I told you that The Gift Theatre’s Hang Man begins with a black man hanging from a tree, what would you think? It would seem to me that pretty much anyone would fairly instantly assume that this is a serious drama about racism, especially after learning that it takes place in Mississippi. This world premiere play, though, is an odd mixture of black comedy, drama, and absurdity that, while tightly directed, ultimately—in this production anyway—doesn’t really find a way to connect all of these disparate elements. The actors here almost all play it very straight, and this is a show that by its very nature can’t be played straight. Its more bizarre moments demand an understanding that there is something funny to mine here, but the company allows that opening moment to shift the entire play into such a serious realm that humor is left dangling. 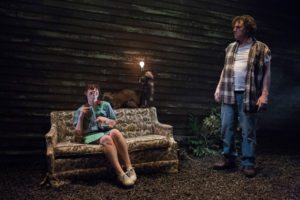 About that opening moment: we quickly learn (because the corpse of Darnell, played by Gregory Fenner, tells us so) that this death was not a lynching, as it appears, but an episode of auto-erotic asphyxiation gone awry. Darnell tells us that he began doing this when he was ten years old partly to spite his mother and found that it felt good; he’s been doing it ever since. That is not to say that there isn’t a major undercurrent of racism at play here. One character, Paul D’Addario’s Archie, is so racist that he cannot even tolerate the presence of a 13-year-old black girl. Another character, Angela Morris’s Marjorie, becomes obsessed with finding out everything she can about the history of slavery after having some kind of mystical revelation upon seeing the body. The N-word comes out at least once. Yes, the play does deal with racism. 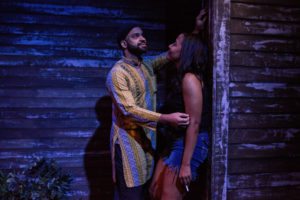 But Marjorie, who has never in life met Darnell, also claims to be having the dead man’s baby and, bizarrely, she does. She also dons an afro wig and smears her face in an effort to be more like him and claims to be his wife. She even brings the dead man a chicken dinner (“Y’all like that, right?”). And Archie is so incredibly racist that he makes Sam Rockwell’s character in Three Billboards Outside Ebbing, Missouri look downright tolerant. And dead Darnell, in addition to several soliloquies with the audience, has two long conversations with his niece G (a charming Mariah Sydnei Gordon) that sound just like the kind of conversation that a favorite uncle might have with his niece while he is still alive. And Darnell, it is revealed, is a compulsive gambler who pretty much always loses…other people’s money. And a romantic subplot between Jahaad (Martel Manning) and G’s mother Sage (Jennifer Glasse) seems discordant with pretty much everything else. Are you getting the notion that there is a lot here that goes far beyond any kind of typical racial drama? The problem is that, aside from Gordon and Morris, the cast doesn’t really seem to realize that. Everyone else seems to be in a totally straight play while utterly preposterous things are happening all around them. And that is why, ultimately, the play doesn’t work despite solid acting from everyone in the cast, a dynamite sound design by Stephen Ptacek, and excellent lighting by Arnel Sancianco.

Ultimately, it has to fall to the director to make this kind of complicated play work, and therefore, despite strong blocking and pacing and excellent performances from all of the actors, I have to fault guest director Jess McLeod, an accomplished director (Hamilton Chicago, CST’s Short Shakes A Midsummer Night’s Dream, and Porchlight’s Marry Me a Little among her many credits) who here just does not find the right balance for Stacey Osei-Kuffour’s unusual script. Didn’t she notice the incongruities that make a single tone completely impossible? Maybe I’m being too harsh here. Maybe Osei-Kuffour presented her with an impossible task. How do you make an audience laugh after that opening image, while the hanged man remains right there the whole time in The Gift’s intimate space? Maybe, no matter what McLeod had done, it just isn’t possible.

The bottom line here is that I left the play feeling that I’d been through a wringer when I think the playwright wanted me to feel the sheer absurdity and illogicalness of the play’s sequences. I felt on several occasions that there were lines that, read a different way, might have been funny in their utter incongruity, but instead I got racist Archie. When a third of the play focuses on a dead man explaining his outrageous kink gone wrong and another third focuses on a certifiably insane woman who is in love with a corpse, I shouldn’t exit the theatre thinking about nothing but a huge man (compared to all of the other characters), overpowering everyone with his bellowed bigotry. It would have been a far better show had I left thinking about Marjorie’s lunacy.

Hang Man is now playing at The Gift Theatre, 4802 N Milwaukee Ave. in Chicago, until April 29. Performance times vary; check website. Tickets are available from The Gift Theatre. Find more information about current plays on our Current Shows page and at theatreinchicago.com.