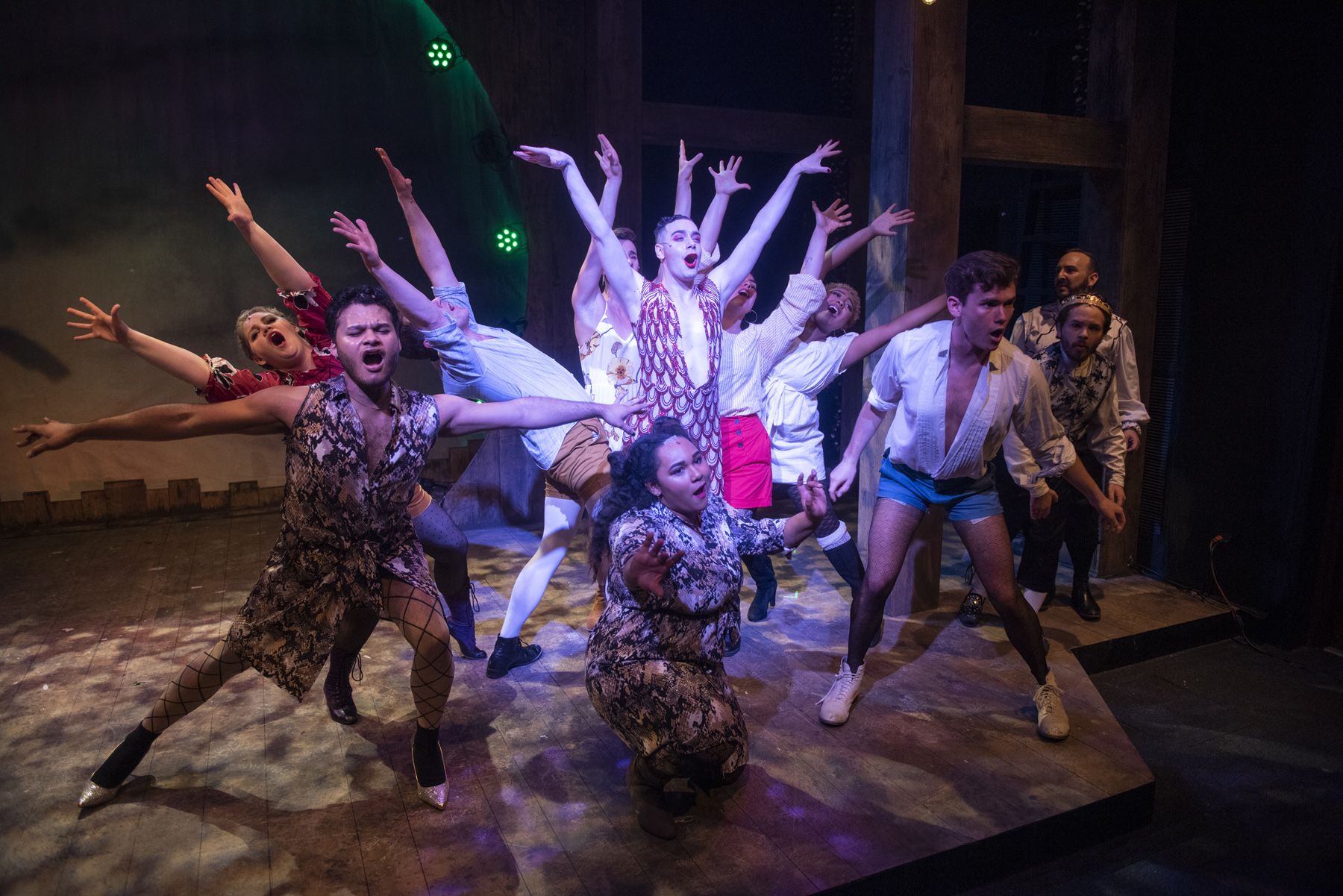 It isn’t often that a small Chicago theatre company is able to produce the midwest premiere of a Broadway show only six months after it closed in New York, but Kokandy Productions—Johnny-on-the-spot when rights were released—is doing just that with Head Over Heels, a musical that combines the songs of The Go-Gos with a sixteenth century play called The Arcadia by Sir Philip Sidney. In doing so, Kokandy has gifted Chicago with the upbeat queer musical of the summer and provided a theatrical extension of Pride month.

Sidney’s play, here adapted by James Magruder, forms the basis for Jeff Whitty’s very clever book in a show that strives to be much more than a simple jukebox musical. The plot of this very LGBTQ-friendly show concerns the royal family of the fictional Arcadia as they seek to navigate a difficult time for both themselves and their country. King Basilius (Frankie Leo Bennett) has received word through an oracle named Pythio (Parker Guidry) of an existential threat to his nation and its fabled “beat”—which all citizens enjoy as a birthright. Pythio, however, warns the king of four dire predictions, telling him that if they all come to pass the beat will be no more. Ignoring the advice of his aide Damatas (Shane Roberie) to seek help from his people in order to head the prophecies off, the King in his arrogance opts to keep the whole thing as a secret, assuming that he is strong enough to handle it himself, as the predictions all involve the royal household and he is certain that he rules over his family with an iron fist. What follows is a very enjoyable, even if utterly predictable, musical that bends genders and sexuality far beyond what one might expect from a play written by a contemporary of Shakespeare (who himself was known to play with genders quite often).

In addition to trying to circumvent disaster, the King is also trying to arrange good marriages for his two daughters, the beautiful Pamela (Bridget Adams King) and the “plain” Philoclea (Caitlyn Cerza), whose loving relationship with a shepherd (Jeremiah Alsop) he squashed in the opening scenes. Pamela, whose sense of self is completely entwined by the fact that everyone celebrates her beauty, has rejected all suitors. Though she doesn’t know it, she’s looking for something that no man can give her, and she discovers it in her friend and servant Mopsa (Deanalis Resto).

The royals—Basilius, Pamela, Philoclea and Queen Gynecia (Liz Norton)—along with many of their countrymen undertake a journey to the forests of Bohemia, where the king is convinced he will discover answers to his problems. Unable to stop himself, the shepherd, Musidorus, follows them, eventually disguising himself as an Amazon warrior in order to infiltrate their little troupe. Unbeknownst to any of them, his mere presence (along with his feminine camouflage) will trigger three of the four prophecies to come true, putting the beat in serious jeopardy.

Co-directors Derek Van Barham and Elizabeth Swanson, along with choreographer Breon Arzell and music director Kyra Leigh, pull strong, energetic performances from the actors. Norton and Bennett, almost comically mismatched in height, anchor the cast as the king and queen. Bennett has a great time with his imperious character and the elegant Norton, who spends the bulk of the play frustratingly in the background, finally comes alive in the final third and makes the most of it. Cerza and King are completely believable as sisters whose very different self-images do nothing to diminish the strength of their desires and their love for each other. Alsop is a revelation as the sincere shepherd/“Amazon” who finds himself a bit overwhelmed as events spin out of his control. Resto is perfect for their role as the lesbian Mopsa, at one point even reveling in a “Vacation” to Lesbos (using the iconic Go-Gos song, of course). But it is Parker Guidry, vibrantly and outrageously costumed by Uriel Gomez, who steals the show. Guidry, who identifies as nonbinary themselves, plays the flamboyantly nonbinary Pythio with relish, looming over everything that happens in the role of Fate, watching and joyfully manipulating events for their own ends, leaving the honest and confused Damatas to try to figure out just what the heck is happening before it all comes down on his King. And all of this is punctuated by a brilliant ensemble who play all sorts of gender and sexuality-bending roles as well as (quite memorably) Musidorus’s sheep.

While other jukebox musicals opt to tell a story that loosely connects the songs (Mamma Mia) or frame them within a biography of the artist(s) involved (Beautiful, Jersey Boys), Head Over Heels dares to be different and succeeds a joyfully surprising amount of the time. The Go-Gos’ music is handled very well. “We Got the Beat” (of course) opens the show and defines the central aspect of life in Arcadia. King’s renditions of songs like “Beautiful” and “How Much More” declare her character’s outsized personality, while Cerza’s more internalized character is clear in “Good Girl.” Alsop shines in such songs as “Mad About You,” expressing the deep love that won’t allow him to quit his pursuit of Philoclea. Guidry, Bennett and Norton share “Heaven Is a Place on Earth” as their characters seek greater understanding of themselves. And the lovers enjoy the perfectly utilized “Our Lips Are Sealed” as they pledge their secret loves. This is definitely not your typical jukebox musical, and Kokandy’s jubilant production proves that the company deserved this opportunity to present it to Chicago. Head Over Heels is a fantastic summer show that fits very well on the intimate stage of Theater Wit and will likely have you on your feet and dancing. It’s an absolute joy.

Head Over Heels is a Kokandy Production now playing at Theater Wit, 1229 W. Belmont, Chicago through 8/25. Check the website for specific dates, times, and tickets. Find more information about current plays in our front page recs and at theatreinchicago.com.