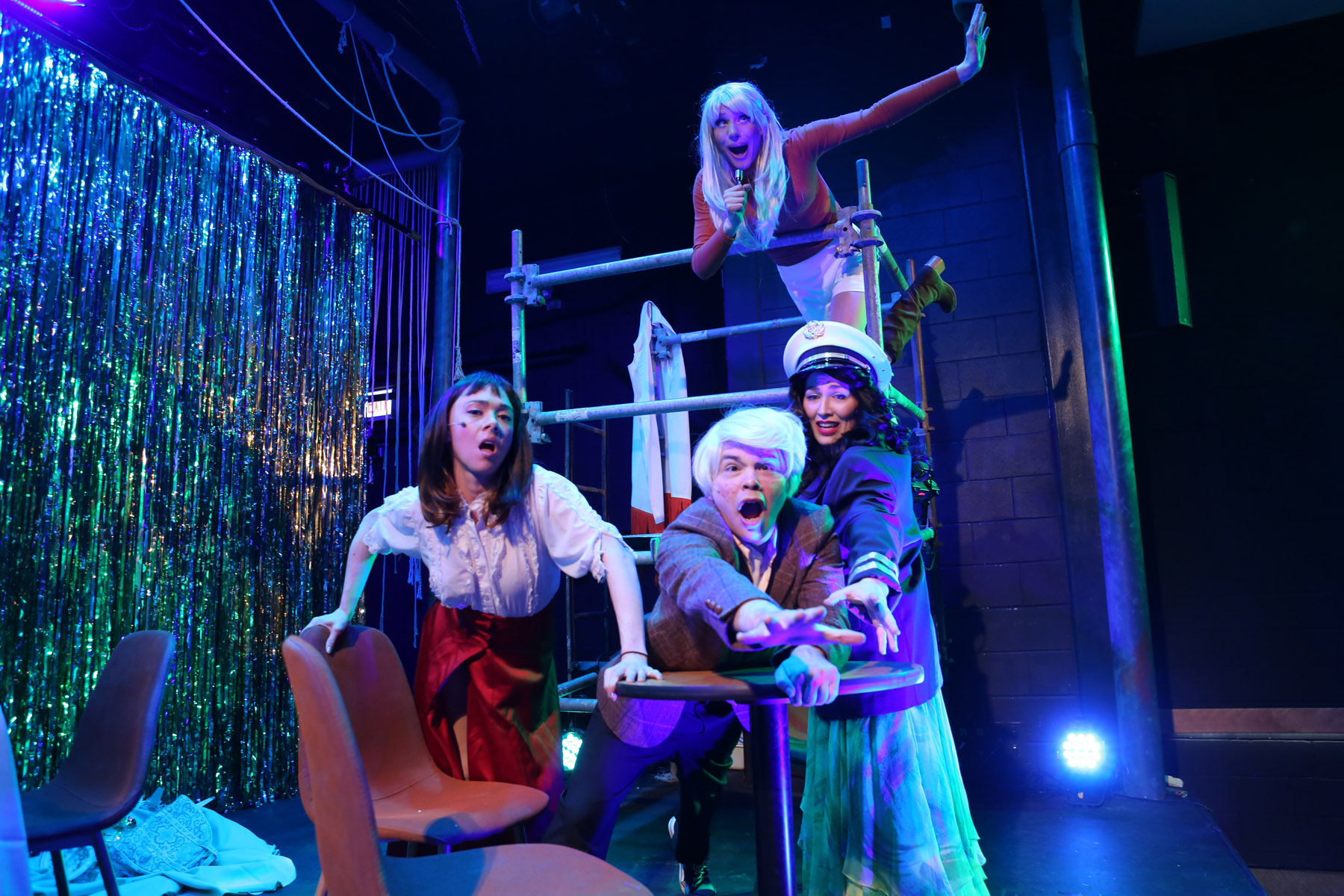 1972’s The Poseidon Adventure, the classic tale of the doomed SS Poseidon and its New Year’s capsizing, was perhaps the premiere achievement in the era of disaster films, an era that included Earthquake, The Towering Inferno, Airport, and others and is echoed in the works of such filmmakers as Michael Bay today. An upside down soap opera on the sea, Poseidon has always been ripe for parodying, and in 2002 Hell In a Handbag Productions, then a brand-new company, hit it big with their musical version. Seventeen years on, HIAH is remounting Poseidon: An Upside Down Musical for the second time (they did it in 2009), and the result is the same: high camp, enjoyable music, and a tidal wave of fun.

This year’s version brings back many of the performers from earlier productions as well as adding some new ones, and everyone has a great time. The story of the musical involves a group of Poseidon junkies who get together every New Year’s Eve to rewatch their favorite film (and party). Gradually, as the “film” plays out onstage, their deep affection allows the watchers to be subsumed into it and become part of it. And, as everyone has a great time, the SS Poseidon flips over once more.

All of the classic scenes are there, up to and including the Shelley Winters swimming scene. (The tag line of the musical is, “It’s not over til the fat lady swims.”) And a whole lot of sexual nuance that may have lain just below the surface of the original is front and center in this version. I have not seen the movie in ages, but I don’t recall, for example, a pedophilia subtext or a closeted gay haberdasher; these are undoubtedly inventions of David Cerda, leader of Hell in a Handbag and the show’s playwright. (Of course, what might have been innocent in 1972 would look pretty strange seen from a modern eye, including the amount of time and attention a young boy gets from one particular crewman.) Not to worry though: everything is played for laughs (and even the pedophilia bit is rectified in the end), and what we are in for is a joyous retelling of the film.

At the start we are told by the ensemble (and a wonderful Caitlin Jackson) that “movies have the power to save your life,” and for those gathering at this annual party this one (fairly schlocky) film seems to have done just that. Before the curtain ever even opens and we glimpse the crew and passengers of the cruise ship for the first time, we have already been introduced to both the glory of film and the way that people tend to bond with their favorites. (Mine was Mary Poppins; I could watch that movie forever, living in its magical reality that was so much better than my real life.)

Once that curtain opens, and director Derek Van Barham allows us onto the ship itself (which is portrayed by Christopher Rhoton’s multiple levels of movable scaffolding that allows the “climbers” plenty of opportunity to make it “up” to the “bottom” of the ship), we are primed for a life-altering experience. Naturally, one of the first songs we hear is from a preacher (David Lipschutz), who tells us almost blasphemously that we should look to ourselves and not to God for ways out of trouble. His point is that God has given us wisdom and we should use it rather than sitting around praying for supernatural intervention. Our lives are ready to be altered.

The other climbers also get opportunities to explore themselves through song. Closeted gay haberdasher James Martin (Scott Sawa) sings about his bachelor life. “Hooker with a heart of gold” Linda Rogo (Elizabeth Lesinski) sings an homage to a line in the movie about how she is wearing “just panties” (but what else does she need?) beneath her evening gown. Simpleton singer Nonnie (Stevie Love), who is one of the first to lose someone important to her—her brother and bandmate—sings the comical/plaintive “Did You Like His Music?” Overweight Mrs. Rosen (Tommy Bullington) gets another song based on a movie line, “(In the Water) I’m a Very Skinny Lady.” Others share songs, but we get to know them through their interactions and lyrics: Robin (Frankie Leo Bennett) is the eleven-year-old with the hyper “helpful” crew member friend; his sister Susan (Katherine Bellantone) is aflutter with teenage hormones all addressed at the Reverend Scott. We also meet policeman Mike Rogo (Shane Roberie), crew member Acres (Nicky Mendelsohn with a thick Scottish brogue), and Mrs. Rosen’s husband Manny (Michael S. Miller), all of whom play important roles as the escape moves on.

Van Barham not only handles the complex navigation of capsizing an ocean liner with aplomb, but gets some fine campy performances from his ensemble. Love, in particular, seems born to play a ditzy blonde. Bullington’s Mrs. Rosen is alternatively sweet and strong, while Bennett’s Robin has just the right amount of innocence mixed with all of the sexual innuendo. And Sawa is allowed to show multiple layers of characterization as the one climber who grows the most inside during the escape.

No one is going to come into something called Poseidon: An Upside Down Musical expecting powerful epiphanies and serious theatre; you know before you go in that it’s going to be a campy and funny show. In that you will not be at all disappointed. This is classic Hell in a Handbag—quite literally. It was their first big hit and now, playing at the Edge Theatre (which itself would be at home on a cruise ship), it is perfectly situated to do the job again. By the time you reach the finale (“Keep On Climbing”) you’ll have been thoroughly entertained, though you might want to forego cruising for a few years.

Poseidon: An Upside Down Musical is now playing at the Edge Theatre, 5451 N Broadway through April 28. Check the website for specific dates, times, and tickets. Find more information about current plays in our front page recs and at theatreinchicago.com.