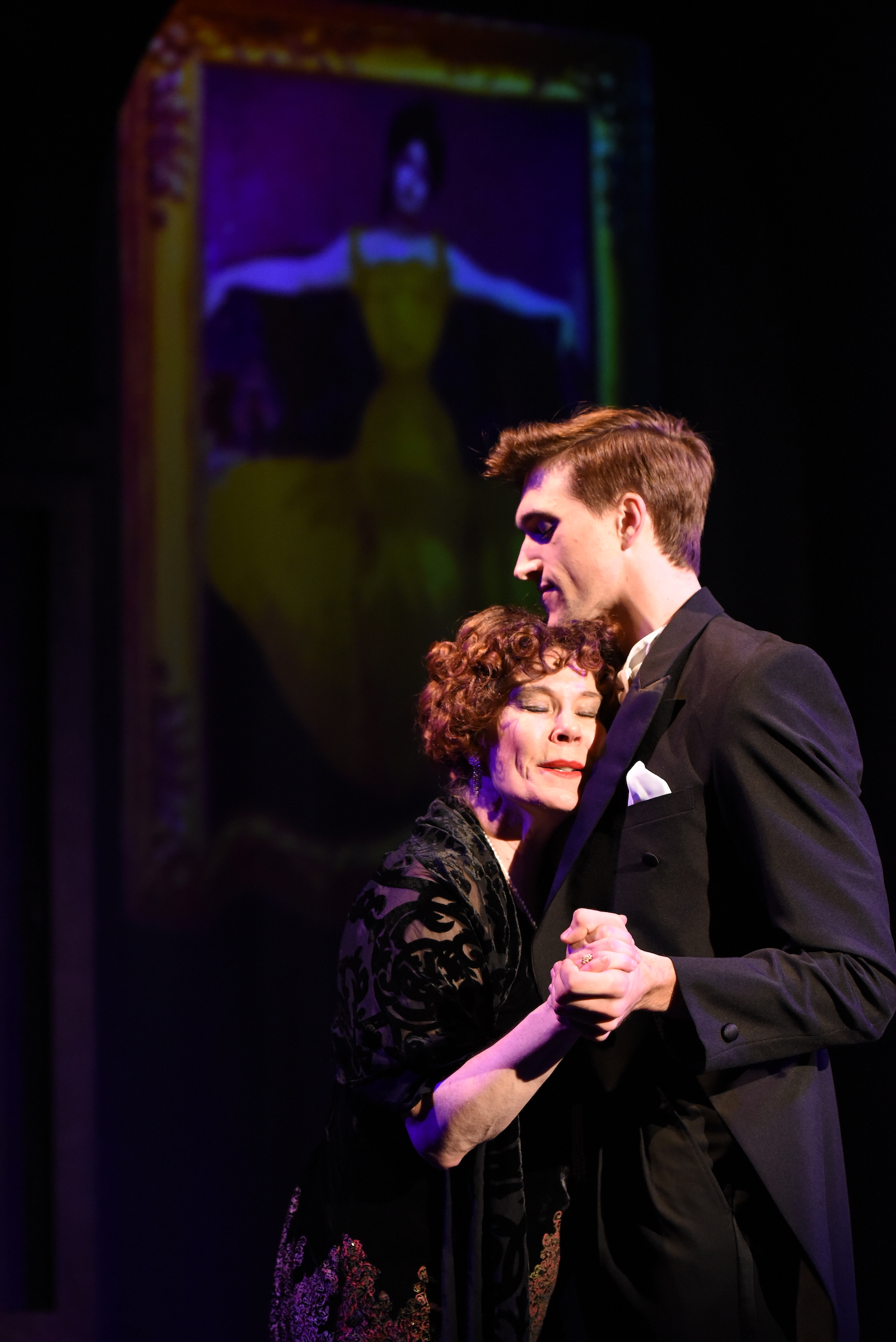 There is a moment in Porchlight Music Theatre’s Sunset Boulevard when Billy Rude, playing the down-on-his-luck screenwriter Joe Gillis, is dancing with Hollis Resnik’s faded screen icon Norma Desmond and he suddenly finds himself gliding across the floor with her much younger self, played by Mandy Modik. When Resnik once again slips into the dance replacing Modik, the look of sheer dreamlike joy on her face speaks volumes about her character’s tenuous connection to reality. Here she is, decades after her career abruptly ended when silent films gave way to talkies, long after the youthful face that Hollywood celebrated had begun to develop wrinkles and lines, still able to get this young man to see her as she once was, if only for a moment.

The brief dance is a dream within a dream, but Resnik dares us to see it any other way than as validation of Norma’s belief that everything can return to what it once was—despite the fact that we know that she is only briefly living out an unattainable fantasy. In this one shining moment, and in hundreds more throughout this excellent production, Resnik reminds us why she is one of Chicago’s finest actresses, making Norma her own as much as Glenn Close ever did on Broadway.

The Andrew Lloyd Webber musical (book and lyrics by Don Black and Christopher Hampton) is an utterly faithful adaptation of Billy Wilder’s 1950 noir classic film, which starred actual silent film star Gloria Swanson as Norma. Director Michael Weber pays plenty of homage to Wilder’s masterpiece, even taking us directly back to it using Anthony Churchill’s evocative projections (which, at least on opening night, were at times a bit shaky) to show us actual footage from the movie. But no matter how successfully a director manages to achieve a noir atmosphere onstage, Sunset Boulevard lives and breathes with the performance of its showcase role.

Technically, Rude’s character is a bigger part than Norma, as he narrates the entire show and appears in every scene, which Norma doesn’t. But Joe, despite the fact that his arc is the essential catalyst for everything that occurs, is ultimately just a struggling artist who becomes a kept man. Rude’s performance is outstanding, to be sure, and he adds a layer or two of darkness to the character that can’t be found in William Holden’s original version, giving Joe a bit more agency in his own situation. Still, it is Norma who dominates every time she is on the stage because she has never stopped seeing herself as the world’s best actress, the one who has a right to the spotlight. (The scene in which the aging actress, visiting her former studio, is actually bathed in a spotlight—a scene that came from the film—is another one that allows Resnik to show us the desperate desires of her character.)

The extraordinarily gifted Larry Adams, with his magnificent baritone voice and unflappable stage presence, plays Max, Norma’s ever-faithful servant, and Jeff Award-winning Michelle Lauto is wonderful as Betty Shaeffer, the youthful would-be writer and potential (age-appropriate) love interest for Joe. But ultimately everything revolves around Resnik, one of the great treasures of Chicago theatre, and she really proves her worth. Her Norma is steeped with the ache of irrelevancy, of a faded star grasping at a last chance to return to the limelight. A no longer celebrated actress at fifty who lives in an old mansion surrounded by memorabilia of her earlier career, she is mired in dreams that she can make it come again.

Norma proclaims that, while modern actors require words to perform their parts, the greater challenge came when they needed to convey every thought, every emotion, every conflict through their faces and eyes alone. Resnik takes this to heart in a virtuoso performance that might well serve as a lesson on body language and facial expression. In every moment, whether seducing her young gigolo, basking in the studio limelight, or slipping so deep into her delusions that she will never escape, Resnik holds more than Joe captive. It’s impossible not to feel sorry for this woman, broken by time and the absurd beauty standards of studio-era Hollywood, as she futilely attempts with her will alone to become once again what she once was.

Hollywood has never been very nice to “actresses of a certain age.” Movies have always been a medium that admires youth, and though no one has ever had much of a problem with older men, it is only in recent years that older women have been viewed as potentially bankable stars. For most of the first century of film, once you were past forty you were a has-been. Theatre has a history of being a bit more forgiving with shows like Gypsy, Mame, Hello Dolly, etc., but the reality is that acting remains a game that is weighted heavily in favor of the young, especially for women. Sunset Boulevard, designed to provide a showcase for someone who is no longer an ingenue, is (like those other musicals) a brilliant opportunity for an actress who can seize it. Hollis Resnik is one such actress. I can’t claim that Norma Desmond is the role of her life when she has played so many memorable parts, but her performance here is absolutely unmissable.