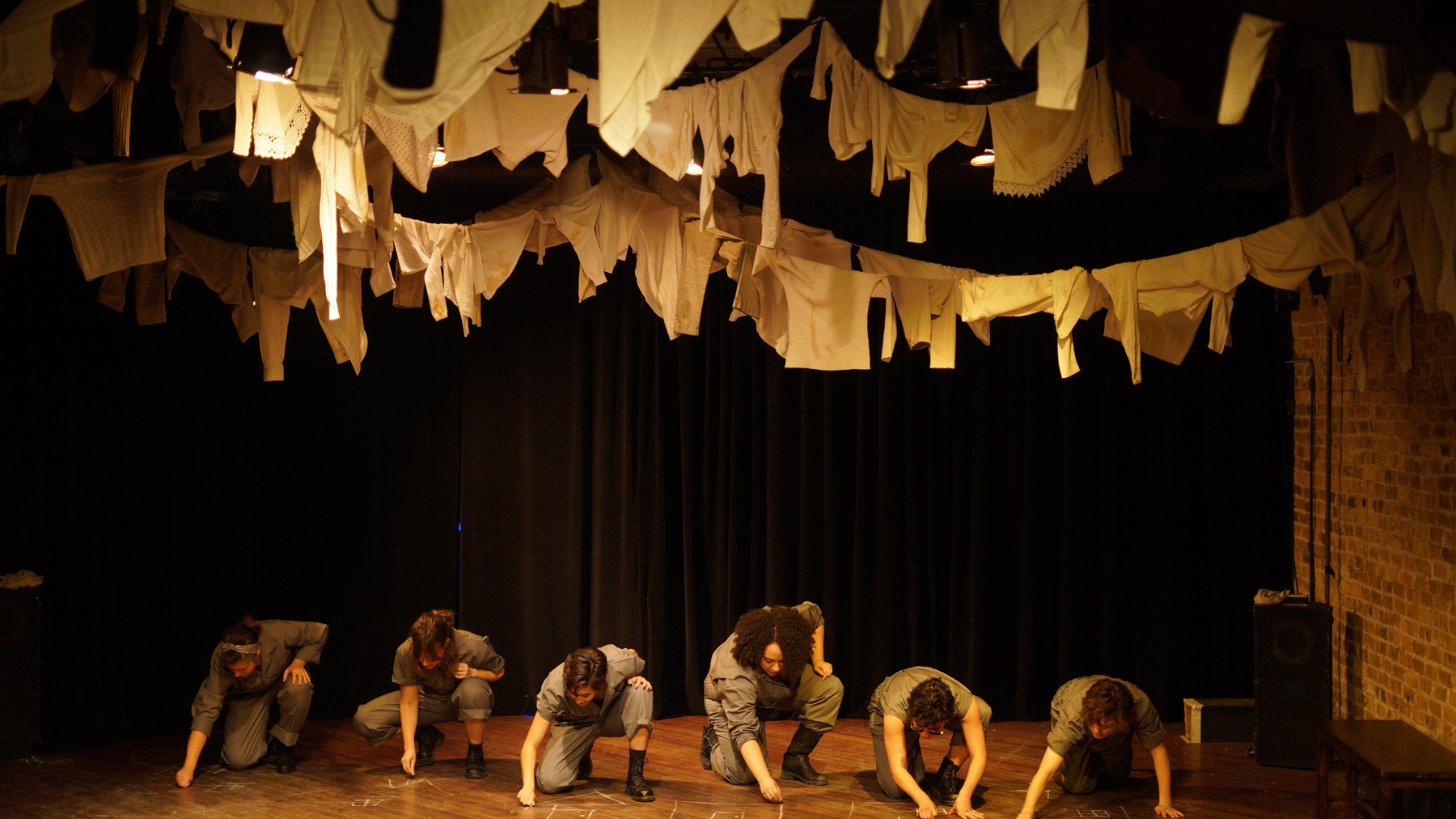 I Am Going To Die Alone and I Am Not Afraid at Prop Thtr is a Holocaust play, but saying that is akin to saying that Hamilton is a history play: it may be true, but it really doesn’t do the show any kind of justice. This piece of devised drama (created by an ensemble that includes Sarah Giovannetti, Sonia Goldberg, Lyle Sauer, Zoe Savransky, Ariana Silvan-Grau, Isabel Thompson, and director Anna H. Gelman) is an opportunity to add some missing pieces to most people’s understanding of the 20th Century’s most well-known atrocity. Beginning with the story of Franceska Mann, a ballerina who stole a gun from a Nazi officer and killed him on the way to the gas chamber, I Am Going To Die Alone… seeks to break down the unfathomable horror of six million Jews murdered and make it personal by telling some lesser-known stories of bravery, sacrifice, and hope in the face of terror.

According to Gelman, the stories we are told are “true or inspired by truth,” and the inspired cast uses all of its collective energy to tell them. Some (as you may expect) will break your heart from their first moments. Despite knowing the ultimate outcome, some will make you laugh. Some will give you a kind of hope that Resistance is possible even when all seems lost. Most of all, though, these stories will make many viewers angry. Artistic Director Olivia Lilley wants this reaction, calling the show a “battle cry to stay alert and awake.” (The similarity to our current national situation is both intended and easy to see, and there are several occasions when the cast openly acknowledges it.)

The 70-minute production begins with what appears to be a parody of some kind of underground Jewish vaudevillian variety show set in wartime Berlin. (There is even one actor playing a farcical version of der fuhrer.) The sketch is very funny and even silly. However, it becomes less funny when we see it again…and again…and realize that some of the players are no longer around to the part, undoubtedly victims of the Nazis. From the start, we are prepped for an evening full of different emotions, but there is never any question about where we are heading.

Many of the brief sketches don’t hold back at all from pulling on our heartstrings. Sauer is powerful as an introverted Berlin boy who has become infatuated with another boy he has seen in his neighborhood. We watch as they meet and fall in love, making a habit of taking long walks together. Then, one day, the other boy and his family are gone. The pain on Sauer’s face as he becomes aware of how this scene will end is contagious.

In another sketch, Silvan-Grau plays a mother separated in the camp from her young son. She is overwhelmingly worried about him, especially after catching a glimpse of him and realizing how sickly he appears. She implores a passing officer to let her talk with him, even though they cannot breach the electric fence that keeps them apart. It does not end happily…but little does here.

Goldberg is especially strong as a Jewish woman who is determined to say the Passover prayers with her fellow inmates despite their fear and the Nazis’ presence. She will not back down no matter what the cost, and it is a real moment of personal power that cannot be beaten back.

Each member of the ensemble has moments like these, and Gelman’s tight direction (along with helpful sound design by Morgan Hunter and often-inventive lighting design by Stefan Brün) keeps everything moving and poignant. Alec Phan’s original music is used several times to underscore the pain that these trapped people are trying to fight their way through.

Many of the stories told here, in all likelihood, will be new to you. The heroism and sheer force of will displayed by these characters is a powerful and constant reminder never to give up. As Gelman says, “Never Again means Never Again for Anyone,” and in an era that is closer to fascism than any American ever thought we could possibly be, that is a very important reminder that resistance, in cases like this, is not ever futile. It is essential.

I Am Going to Die Alone and I Am Not Afraid is now playing at Prop Thtr, 3502 Elston, Chicago, through Dec 6. Showtime is 70 minutes with no intermission. Check the website for specific dates, times, and tickets. Find more information about current plays in our front page recs and at theatreinchicago.com.