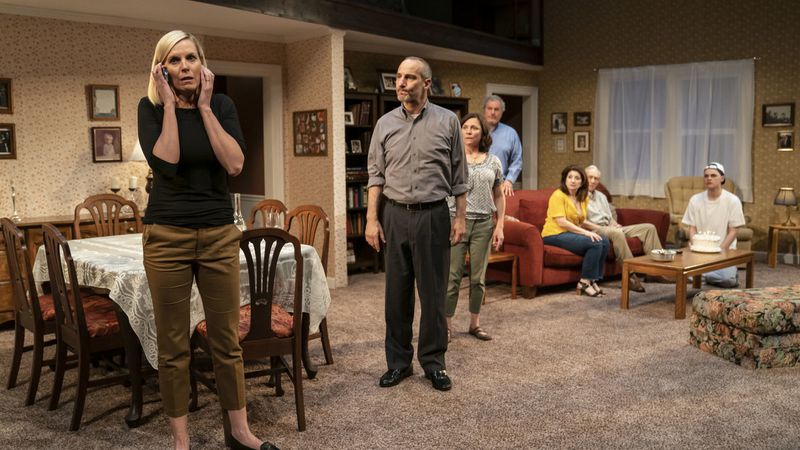 At some point during the second act of Victory Gardens Theater’s production of If I Forget, I realized I had somewhere along the way lost track of the fact that I was sitting in a theater attending a play. Instead, I felt as if I was sitting in a chair in the living room of the Fischer family, watching their family drama unfold in real time. The authenticity of the dialogue, the set and the acting were so real, it was hard for me to fathom that these were in fact actors on stage and not a real family dealing with the trauma of loss, religion, aging, communication and love.

The play is a complex masterpiece by playwright Steven Levenson whose other works include the book of Dear Evan Hansen. It is the story of the Fischer family which includes the elderly father, Lou (David Darlow), who was part of the liberation of Dachau, oldest sister Holly (Gail Shapiro) who dreams of starting her own business, middle brother Michael (Daniel Cantor), a Jewish studies professor and atheist, and youngest sister Sharon (Elizabeth Ledo), a fairly devout Jew and default caregiver for the aging parents (though mom has passed away before the play begins). There are also the family outsides including Holly’s second husband Howard (Keith Kepferer), her teenage son Joey (Alec Boyd), Michael’s wife Ellen (Heather Townsend) and Michael and Ellen’s daughter Abby whom we never meet but whose story is an important part of the family dynamics. We first encounter the Fischer family back at their childhood home to celebrate dad’s 75th birthday and also the first time the siblings have been together since their mother’s funeral. In the second act, it’s seven months later and they are brought together again after dad has had a stroke.

It is hard for me to comment on the individual acting performances because I felt this show truly defined an ensemble cast. Otherwise, the family dynamics would not have been so believable. The three siblings convinced me of their love for one another while displaying their strong adult sibling rivalry. Shapiro had the feel of the bossy older sister, Cantor the middle child and only son who wants to define himself separately from the family but receive family approval and Ledo the youngest daughter who wants to care for her parents who she loves dearly but also feels taken advantage of by her older siblings. Darlow is fantastic as the family patriarch and I appreciated his subtleness in the second act as he sits in his chair throughout the entire act, unable to move or speak due to the stroke but clearly listening to the tension exploding around him. The supporting cast was tremendous as well as I felt Kepferer, Townsend and Boyd hovered on the periphery of the family, trying to support when needed but never quite in the middle of the drama. Full disclosure: Boyd is a current student of mine who I have had the privilege of directing in two shows and I was proud of his performance in this professional and moving piece.

This realistic family drama is full of truthful layers. As I reflected back on the show and prepared to write this review, I realized I would be unable to comment on everything that touched me or moved me during the play. What I decided is that this show is perfect for anyone who belongs to a family because there will be a message that will resonate with you. While I enjoyed the reflections on religion, politics, family roles, sibling rivalry along with many other themes, the two that resonated most with me during this performance were those of communication and how we remember the past. First, communication.I have recently been questioning why it is so hard for humans to say what they mean, tell the truth and be open with their feelings. That by hiding all of these things, we find ourselves in all kinds of tangled messes and then when we need the most help, those that our closest to us, our family, may not even know. Or worse, we may have accidentally or purposely pushed them away. Each sibling carries with them secrets or feelings that they are unwilling to share openly with one another. Hiding these feelings from one another creates conflict and pain that could have been avoided with more openness. Even dad has carried things with him for decades that had they been out on the table sooner, may have changed the family story. The other theme that resonated with me was about remembering. How do we remember? What is important to remember? And do we all have to remember in the same way? So much of the story is tied to memory- small personal memory, family memory, larger, cultural memory. As I experience a large transition within my own family and have been faced with decisions about how we remember the past, this part of the story elicited all kinds of deep emotions.

If I Forget is one of the best plays I have seen recently. I would highly recommend this show to anyone who has a family which is, by default, all of us. I challenge you to reflect on the story, find the messages that resonate with you and appreciate these shared experiences of being human.