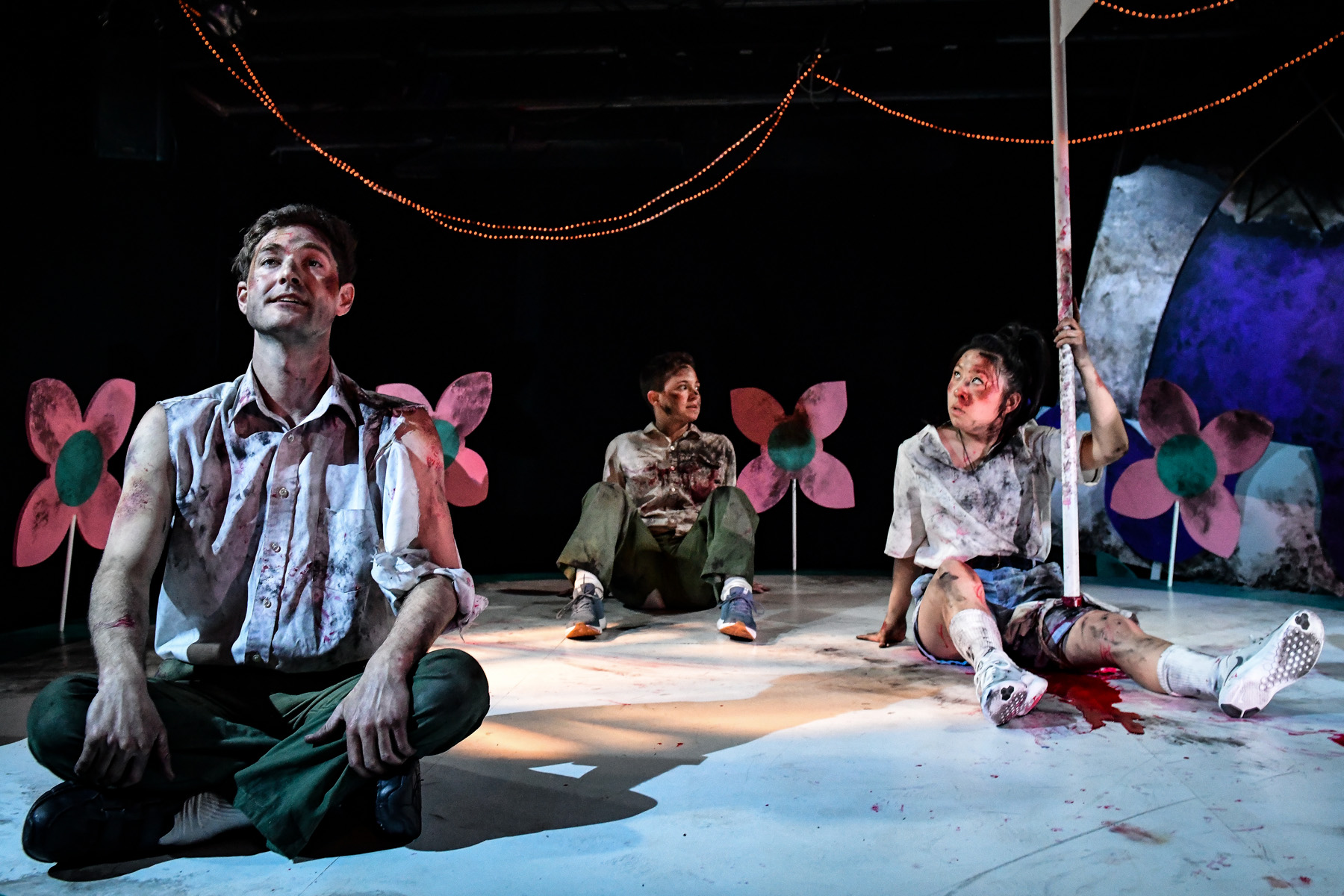 Anyone who has ever been to Disney knows “It’s a Small World,” which is probably the most unrelentingly “happy” place in the whole theme park. It’s a ride on a river past various islands representing countries and continents, all of which contain joyful animatronic characters singing about “a world of laughter, a world of tears…a world of hopes and a world of fears.” Its incessant soundtrack drives parents crazy, but its message of unity (“there’s so much that we share”) is an undeniably powerful one. It is one of the iconic locations in a park that dubs itself the happiest place on earth: the park’s epitome of happiness and simple joy. But in New Colony’s latest play, “Small World,” that theme is turned upside down from the opening seconds.

Something—we are never sure what—has happened in the park. Bombs can be heard exploding, and the silliest, happiest ride in the park is suddenly turned into a terrifying deathtrap. When the generators come online (along with the music), we meet three park employees who are stuck somewhere deep in the ride after the building has, to a great deal, collapsed. They are the hyper-positive Disneyphile Kim (Stephanie Shum), who spends the whole play impaled by a piece of the island; the lesbian Becca from Iowa (Jackie Seijo) who was on her final shift in the park when everything went down; and Donny ( Coakley), who is a man with some secrets. These three co-workers are trapped and somehow must find a way to escape.

Jillian Leff’s and Joe Lino’s script is full of clever Disney references, as each of these people has spent so much time there that the lines have infiltrated their spoken language, and the authors could not have chosen a more perfect ride to turn into a nightmare. Walls collapse. Electric wires are uncovered. A body washes up (which prompts Kim to declare it against the rules for anyone to die at Disney). And that song is a constant reminder that their “small world” has gotten far too small.

Director Andrew Hobgood does a wonderful job at keeping the cramped space alive, even with one immobile character. And the performances he gets from his actors are superb. Each of them has moments where they take the focus. Shum, profusely bleeding in some great makeup work by Uriel Gomez, desperately tries to remain upbeat despite the fact that, even if they could escape, they have no clue what awaits them outside. Her mile-a-minute delivery provides most of the night’s humor, as the authors are well aware that laughter is needed medicine in this twisted tale. Coakley races on and off the visible set, desperately trying to lead them outside. As Rob’s secrets come out, his character changes, and Coakley is able to wring mordant laughter from the deepest dark places. (At one point he uses the dead body for a weight to do sit-ups.) Seijo, whose character is at first freaked out merely at the sight of Kim’s blood, moves from vomiting to confusion to anger that she will never get to return to her erstwhile girlfriend in Iowa. She is the one who experiences the pain of loss most keenly.

Small World finds both the laughter and the tears in the disaster it is portraying. Ultimately, it suggests, humans are not worthy of their small world. Without ever evoking climate change, Leff and Lino, whose script by the way is keenly aware that the Disney Corporation is not nirvana, allow us as something artificially beautiful is destroyed while we know that, outside, people have wreaked havoc on nature as well. Becca’s last plaintive a capella version of “It’s a Small World” seems to plead for a world where “a smile means friendship to everyone” even as we see what the destructive forces of man have unleashed.

Small World is a New Colony production now playing at the Den Theatre, 1333 N. Milwaukee, through May 4. Check the website for specific dates, times, and tickets. Find more information about current plays in our front page recs and attheatreinchicago.com.