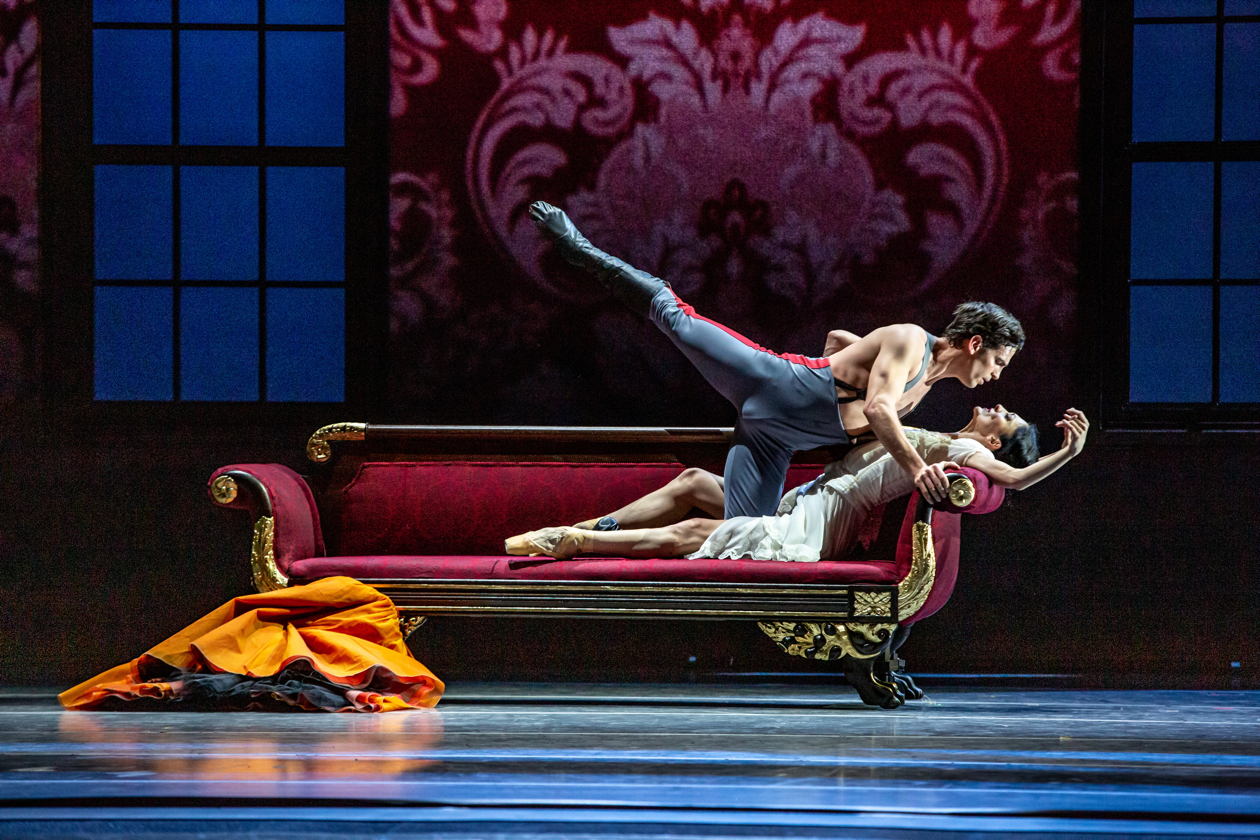 There is a moment in Leo Tolstoy’s masterpiece Anna Karenina when it is impossible to tell if Anna is brave or crazy. Though her passion for Vronsky–her dashing, dangerous, enigmatic, and maybe a little self-absorbed lover–has overtaken her to the point where she’s made her desire clear to everyone involved, including her husband–the powerful, noble and maybe a little stiff, Karenin–it’s not too late for her to play it safe and turn back.

But, of course, she doesn’t turn back. Why? On some level Tolstoy never explains–which, by the way, is amazing considering in nearly one thousand pages he explains literally everything else–Anna realizes she can’t. And we never know if she even wanted to turn back in the first place.

Moments before the curtain rose on the Joffrey Ballet’s much-anticipated, mega-gamble Anna Karenina, Artistic Director Ashley Wheater and Joffrey CEO Greg Cameron walked on stage to introduce their ballet. The world premier passion project featuring a partnership with the Australian Ballet had been commissioned at tremendous expense, with both an original score and original choreography. As Wheater welcomed the audience to the world premiere, the same question hung in the air.

Minutes later, the digital haze hanging over the stage lifted revealing a train station in Russia just moments from tragedy.

The Joffrey’s journey to this station had been years in the making. Wheater and acclaimed choreographer Yuri Possokhov had discussed their dream of adapting Tolstoy’s masterpiece, but they agreed the circumstances needed to be right. In the meantime, while Wheater’s creative vision and his penchant for coupling narrative storytelling and visually compelling staging with innovative choreography and world-class dance talent were taking Joffrey Ballet to ever greater heights, Possokhov was choreographing a series of critically-acclaimed ballets, including an innovative adaptation of John Cheever’s short story The Swimmer. After more than ten years of dreaming, they decided the time was right.

On its face, Possokhov’s idea seemed simple enough: take one of the greatest novels ever written and turn it into a narrative ballet. After all, a ballet can tell a story. In fact, the three best known ballets of all time tell stories. The Nutcracker, Swan Lake, and Sleeping Beauty… all stories. And, after all, Anna Karenina is about a woman who has an affair. Sounds interesting, right? So, in theory, it makes total sense to tell her story with a ballet.

But here’s the thing: with its thousand pages, Anna Karenina is about a whole lot more than an affair. The infidelity is the hook, but the story is really about the timeless complexities of life–complexities of the heart, family, social status, art, philosophy, politics… and, well, almost everything. And this makes sense because, let’s face it, most stories about affairs just aren’t all that interesting. They start out passionate and wild but then comes the inevitable crash and fallout, and they end up tedious and mostly just… sad.

And therein lies the danger. What if you take one of the greatest novels in literature and turn it into an hour-and-a-half long ballet that misses the point? What if you promise people a masterpiece, but end up giving them something not all that interesting and mostly just, well, sad?

So, brave or crazy?

Incredibly, the Joffrey Ballet’s production of Anna Karenina is a whole lot of brave mixed with a little bit of crazy. Bottom line? It’s genius.

With their Anna, Wheater, Cameron, and the Joffrey creative team have taken the solid foundation for which the Joffrey has come to be known–innovative, multi-dimensional stage design, compelling visuals, lighting and costumes that highlight the beauty, elegance, technical brilliance, and sheer physical power of their world-class dance company–and they’ve built on it with Possokhov’s brilliant original choreography and the deeply affecting score composed by Ilya Demutsky.

Possokhov’s choreography is, at once, powerful and subtle. From the frenetic energy of the train station’s opening to the crisp company scenes conveying everything from the rigid formality of the Russian aristocracy to the jubilation of happy families working together in a wheat field, from the intensely passionate pas de trois love triangle with Anna, Vronsky and Karenin that opens the second act to the impossible yet incredibly cool horse race brought to life, Possokhov’s choreography captures both the passion and emotional depth of the story.

And the ballet is carried along by the beautifully foreboding, at times haunting, and finally joyous score composed by the award winning Demutsky and expertly delivered by Maestro Scott Speck and the Chicago Philharmonic. The libretto, developed by Valeriy Pencheykin, gives a sense of gravity and power that serves Tolstoy’s storyline.

While the digital images projected on stage distract at points and seem a bit overdone–the horse’s eye and morphine needle, in particular–the overall effect works to provide Anna with a necessary dimension supporting Anna’s many subtleties. And the free flowing set design by Tom Pye allows the ballet to rocket along without interruption between scenes and story elements and serves brilliantly to foreshadow motifs that prove tragic in the end.

But, let’s be clear. There’s one reason above all why Anna Karenina works: Anna. It was impossible to imagine that Victoria Jaiani could improve on her brilliant performance as Odette/Odile in Swan Lake or, for that matter, her sizzling Arabian dance in The Nutcracker, but Possokhov’s Anna seems the role Jaiani was born to dance. From her first moments in the train station to her final tragic end, Jaiani’s performance crosses the spectrum of emotions and is beautiful, believable, and utterly compelling at every stop along the way.

As Vronsky, Alberto Velasquez’s chemistry with Jaiani is unmistakable, but Velasquez also brings a certain humanity and thoughtful understanding to his role that provides another essential dimension and subtlety to the story. Every bit as compelling as Vronsky, Fabrice Calmels gives a stellar performance as Karenin. Strong, noble, awkward, and broken, Calmels conveys Karenin’s moral character and character flaws with profound depth and style.

Running counter to Jaiani, Velasquez, and Calmel’s love triangle, the at first failed and ultimately satisfying love between Levin and Kitty b and gorgeously danced by Anais Bueno and Yoshihisa Arai, works perfectly to counteract the sizzling but ultimately fatal main .

And the backbone of the ballet is once again provided by the ultra-talented Joffrey company. From the ballroom scene to the final joyous dance with Bueno and Arai in the wheatfield–a few blessed minutes given as a gift to restore our faith in humanity after the end of the affair–the world class company shows time and again why they’ve earned their reputation for flawless precision.

In his introduction, Greg Cameron described Ashley Wheater as “brave, bold, and brilliant.”

The same can be said for his Anna.

Anna Karenina is a production by Joffrey Ballet Chicago.  Anna Karenina is now playing at the Auditorium Theatre, 50 East Ida B. Wells Drive, Chicago, IL 60605, until Feb 24. Check the website for specific dates, times, and tickets. Find more information about current plays in our front page recs and at theatreinchicago.com.