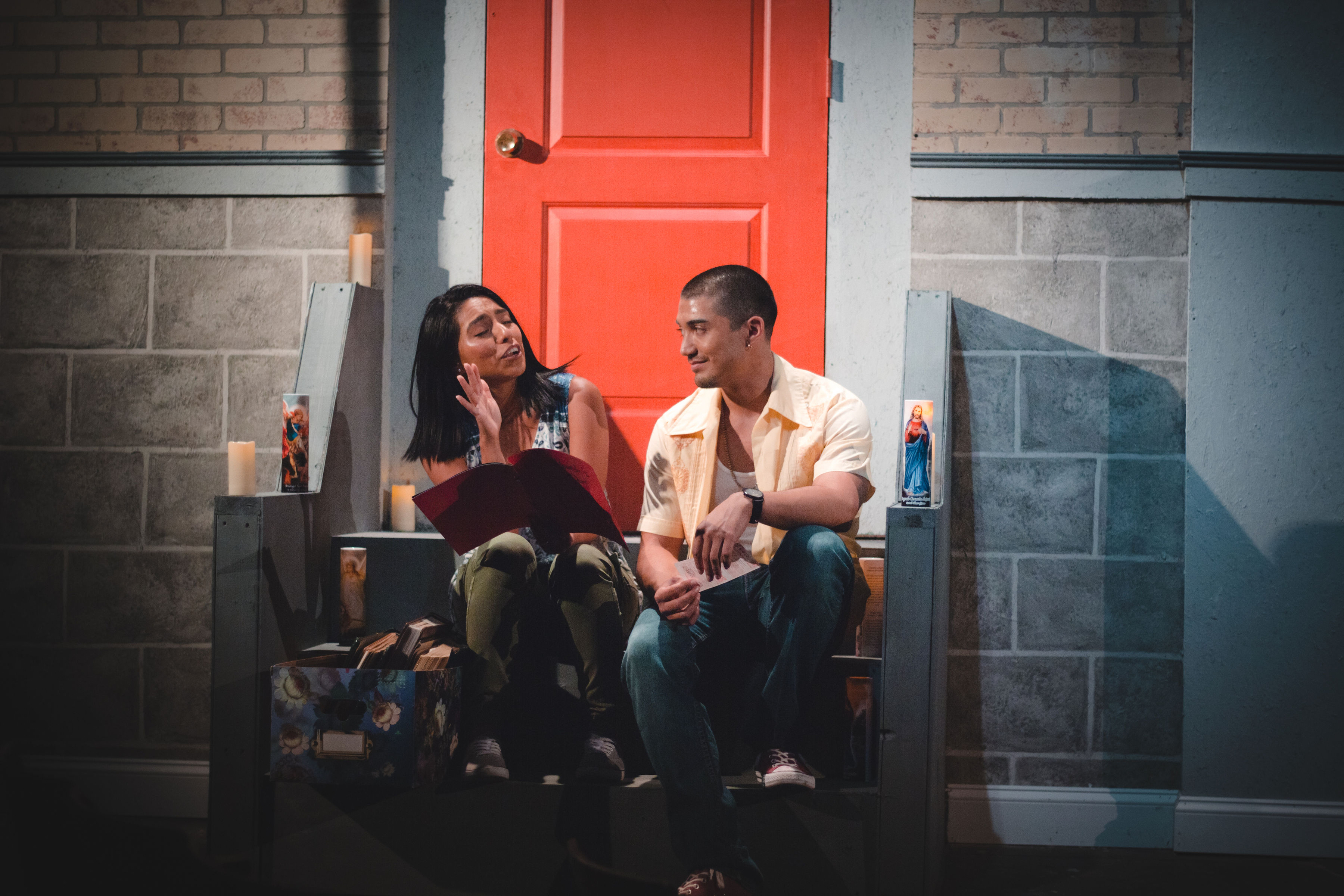 In the Heights, the first musical from Hamilton writer Lin-Manuel Miranda (with a book by Quiara Alegría Hudes), is a wonderfully entertaining celebration of life. It takes place on and around the 4th of July in Washington Heights, a poor Latinx neighborhood of NYC, and its characters are the people who struggle to make lives there. This weekend only (as I came rather late to the party), it is possible to catch the show at the Jedlicka Performing Arts Center of Morton College in Cicero.

Jedlicka’s production (co-produced with Vision Latino Theatre Company) is a thoroughly enjoyable one. Directed by Xavier M. Custodio, this talented and exuberant ensemble of mostly young actors (there are a few notable exceptions) may not mine any new territory here, but they put on one heck of a show. Backed by a strong eight-piece orchestra under the direction of Courtney McNally, they sing and dance their way to a memorable evening.

Arik Vega stars as Usnavi De La Vega, young entrepreneur who owns the neighborhood’s only bodega and therefore knows everyone in the barrio since they all come by for their daily coffee and lottery tickets. He lives with the woman he has always called Abuela (Yolanda Treece in a lovely and powerful performance) who, though technically not related to him, feels responsible for him nonetheless. The neighborhood also features a beauty salon owned by gossipy Daniela (Yajaira Custodio) and a taxi dispatch center owned by Kevin Rosario (Johnny Garcia) and his wife Camila (Ana Santos), whose daughter Nina (Jocelyn Sanchez) is the neighborhood success story and has just come home from Stanford. Her parents think it is just for the summer, but Nina informs them that she has lost her scholarship because the two jobs she had to work did not leave enough time for studying, and she has dropped out.

The story revolves around a trio of occurrences. The first is a winning lottery ticket has been purchased by someone in the barrio, though no one knows it is, in fact, Abuela Claudia who has won $96,000. The second is a blackout that leaves the barrio powerless in the middle of one of the hottest summers ever. The third is a pair of budding love affairs: between Nina and Benny (Michael Fosha), a young man who works for her father, and between Usnavi and Vanessa (Andreece Nikudinovski), a hairdresser at Daniela’s salon.

These people, living in or on the edge of poverty, are the living soul of the barrio, and they don’t complain about much other than the heat. Though they dream of better things, their lives are what they are and the inhabitants of Washington Heights make the most of them, as easily seen in some of the exciting and energetic dance sequences choreographed by Yariana Barralt Torres. (Maria Blanco’s Graffiti Pete is a one-woman dance team all by herself; her energy is boundless.)

This cast is very strong vocally, though their fine voices tend to get lost in the music quite a bit, which is unfortunate and is pretty much my only complaint about the production. Especially if you have not ever seen In the Heights, take one of these final opportunities to get to this show; you won’t regret it.

In the Heights is a co-production from Vision Latino Theatre and the Jedlicka Performing Arts Center now playing at the JPAC, 3801 S. Central, Cicero, through Oct 27. It is presented in 2.5 hours with one intermission. Check the website for specific dates, times, and tickets. Find more information about current plays in our front page recs and at theatreinchicago.com.